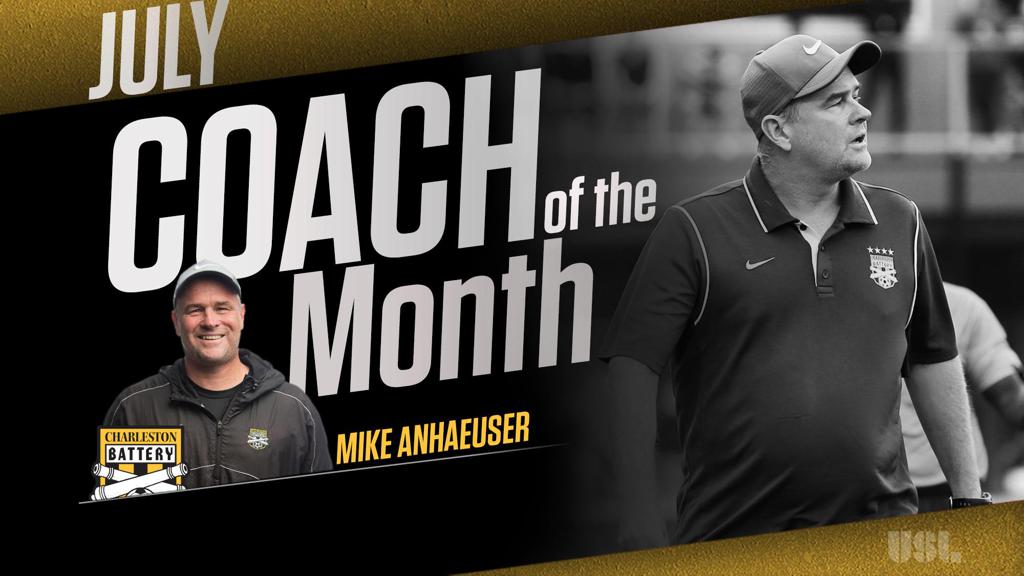 TAMPA, Fla. – The Charleston Battery’s Mike Anhaeuser has been voted the USL Coach of the Month for July, having led the Battery through a month in which the side won five of its six league contests and went undefeated overall to move into second place in the USL’s Eastern Conference standings.

Anhaeuser received 84 percent of the poll to claim the award ahead of FC Cincinnati’s Alan Koch and Fresno FC’s Adam Smith, both of whom led their respective sides to undefeated months as Cincinnati went 3-0-1 and Fresno went 2-0-2 respectively.

“We had a very good month as our team produced on both ends of the field,” said Anhaeuser. “The defense was solid from front to back, and our goalkeeping was very solid in every match. The offensive end was productive with the quality of Ataulla Guerra and his tremendous finishing along with three or four different players chipping in every match. It is very humbling to receive Coach of the Month, but the players deserve all the credit for getting it done on the field.”

Anhaeuser is the longest-serving Head Coach in the USL, having taken the reins at the club in 2005 after previously being a player and assistant coach for the side. This season marks his 25th with the Battery overall, and he is currently closing in on his 200th victory as the club’s Head Coach. Anhaeuser and the Battery have won the most games in the USL’s modern era and stand as the lone side to have reached the USL Cup Playoffs in every year since 2011, while winning the USL Cup in 2012.

The USL Coach of the Month award is voted upon by the USL National Media Panel and the USL Technical Committee, with each group responsible for 50 percent of the overall vote.