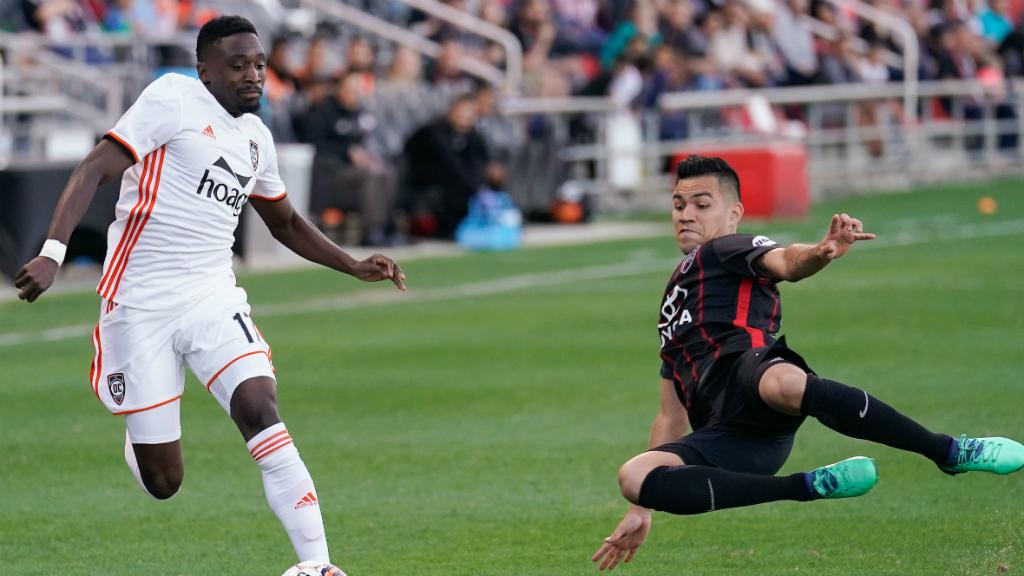 SAN ANTONIO – With just five wins so far this season, and only one of them on the road, San Antonio FC is going to need a big performance when it faces Orange County SC in at Champions Soccer Stadium on Saturday night (10 p.m. ET | Match Center | ESPN+). With that in mind, SAFC has focused on making sure it has itself set up for success in the contest, especially at the defensive end against a strong Orange County attack.

“Our mentality doesn’t change,” said SAFC Head Coach Darren Powell. “We’re always ready to go and we want to make sure we set ourselves up to be sound defensively so we can find ways to exploit the opposition. That’s what we’ve worked on this week, and it’s been good to spend the past couple of days preparing for this game”

San Antonio’s defense has seen plenty of changes throughout the year, and one player that has been seeing more game time as a result is first-year professional Gianluca Cuomo. The 25-year-old has started the last two matches helping San Antonio get two draws against Colorado Springs Switchbacks FC and OKC Energy FC.

“It’s a great experience,” said Cuomo. “I’m getting more comfortable with each game and training session, and the guys are always supportive. The coaching staff believes in me and I couldn’t be happier to be here. Obviously, everyone wants to be playing, so when you get your moment you have to take full advantage of it and that’s what I’ve tried to do.”

While the side has finished all square in its last two league outings, keeping the side currently outside the top eight in the Western Conference, a victory this past Sunday against Liga MX champions Club Santos Laguna in an international exhibition at Toyota Field could add a little confidence. Without the pressure of league points on the line, Powell was able to rotate his squad and take risks, getting a win that provided a valuable learning experience.

“It gives players an opportunity,” said Powell. “Last weekend we used about 19 or 20 players, so it allows us to look at a lot of players in a competitive game and see where they are at this stage of the season, and to make sure that they continue to work hard and push each other. It’s also good for confidence after playing a very talented Santos team.”

SAINT LOUIS LOOK FOR REPEAT: When Saint Louis FC last squared off with Tulsa Roughnecks on June 9 the side recorded its widest margin of victory on the season in a 3-0 win at ONEOK Field. With the sides set to square off again this Saturday at Toyota Stadium – Saint Louis (8:30 p.m. ET | Match Center | ESPN+) the side will be looking to repeat that performance but with the Roughnecks having made a coaching change since then things could be very different.

“They look like they have a bit more structure with not a lot of changes in personnel over the last three games and they’ve started to play some good football so I’m sure it will be a different game than when we visited,” said STLFC Head Coach Anthony Pulis.

The star in the first meeting between the sides this season was midfielder Joey Calistri, who scored a brace against the club he appeared for last season on loan from the Chicago Fire. Since then the goal-scoring has dried up for Saint Louis as the side has scored only two goals, something the club looked to help with the addition of Canadian forward Michael Cox on Thursday in a trade with Nashville SC.

While Cox’s knowledge of Pulis’ system should help – the two teamed up previously at Orlando City B – there is still a positive feeling within the squad that things are close to turning around overall.

“I think the belief is there amongst the team, we just need to be better in the final third and create better chances than what we have been lately,” said Calistri. “All the games we have been successful, we’ve started strongly and need to do the same this weekend if we want to have the same outcome as when we visited a couple weeks back.”

With the side sitting on a four-game winless streak since its first meeting with the Roughnecks and needing to gain ground as it sits in 11th place in the Western Conference, Saint Louis’ players know the club needs to get back in the win column on Saturday.

“All of the guys know we are not where we want to be or maybe deserve to be but that is on us to fix and make sure we give ourselves the best chance to win,” said STLFC defender Sean Reynolds. “Everyone has been focused in training this week and we need to start putting what we preach on the practice field into the game.”

FRESNO CONFIDENT, READY FOR PHOENIX: Fresno FC’s back-to-back victories in its last two outings have allowed the side to grow in confidence, but Saturday’s match against Phoenix Rising FC at Chukchansi Park (10 p.m. ET | Match Center | ESPN+) will be a big task as the Foxes take on the team in third place in the USL Western Conference.

“We are on a little bit of a roll, and there have been periods of the season where we should have been able to go on a little bit of a roll, and we had an unbeaten period, albeit, with a lot of draws, but this time I do feel good about things,” said Fresno Head Coach Adam Smith. “I don’t want to put the cart before the horse, but there’s a big air of confidence around the group. The last two games were big tests against Sacramento and Portland and they’ve risen to the challenge.”

This run has felt different in the locker room for Fresno, which scored four times in its road victory against the Portland Timbers 2 to back up a win against Sacramento Republic FC the prior week. That attacking burst has got the team feeling good and ready for Saturday’s test against a Phoenix side that currently sports a 466-minute shutouts streak.

“That [road win] was huge. It’s good for the team morale and everyone individually and when we’re winning, everyone is happy,” said Foxes midfielder Rony Argueta. “So, we have to keep that going and keep that winning mentality going into this game against Phoenix.”

There will be one change in the Fresno lineup for this match with CJ Cochran recalled from his loan spell by Nashville this week. That means a likely return in goal for Kyle Reynish, who recorded three saves when Fresno and Phoenix met for the first time this season, a 1-1 draw on April 28th.

“In the end, Nashville SC decided it wanted to pull CJ back, and that’s disappointing because he’s been great for a number of reasons. One, he’s been able to give Kyle’s body some rest and secondly, he’s been able to up the competition in all our goalkeepers who I’ve been very impressed with in training,” said Smith. “It’s unfortunate, but you look at your next one in and it’s Kyle Reynish that’s been in the MLS and has had a fantastic career and has done very well for us this season. It’s nothing to be concerned about.”