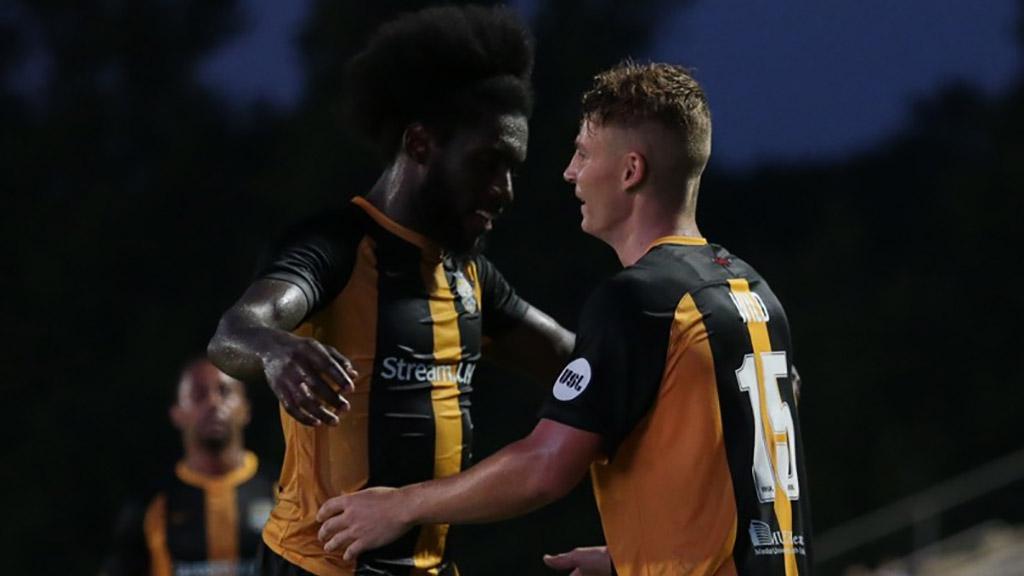 1. It has been a long time between wins for ATL UTD 2, but for the first time since May 16th, it managed a victory, a 2-1 win over Bethlehem Steel FC. While a USL Cup Playoffs place seems a long way off, there is now at least some hope.

2. The Charlotte Independence got back on track with a much needed 1-0 win against Nashville SC. The win snapped a seven-game winless streak and pushed the side back into the Playoffs places.

3. Coming into tonight's USL Game of the Week with just 15 goals in the season the OKC Energy FC offense came alive scoring six goals, 40 percent of the team's goals for the season. The 6-4 win over Las Vegas Lights FC was the equal highest scoring game of the season, tied with Portland Timbers 2's 7-3 victory over LA Galaxy II on May 18th.

Reno 1868 FC kept its undefeated streak going with a 4-1 win against LA Galaxy II at StubHub Track and Field Stadium.

Just seven minutes into the match Reno took the lead after a looping cross from the right from Paul Marie found Antoine Hoppenot at the far post where he volleyed it home. Reno doubled its lead in the 34th minute when Jerry van Ewijk capped off his run with a 20-yard strike.

Reno carried on scoring in the second minute of the second half when Chris Wehan hit a free kick that had too much on it for Justin vom Steeg in the LA goal. Galaxy II pulled a goal back in the 58th minute, taking advantage of a turnover, Justin Dhillon got on the end of a long ball and scored to give LA hope. That hope was extinguished with 10 minutes to play when van Ewijk sealed his brace capping good work from Brian Brown who controlled the ball and drew three defenders, allowing him to set up van Ewijk, left open, for the goal.

OKC Energy FC was made to work hard but pulled off a thrilling 6-4 victory against Las Vegas Lights FC at Taft Stadium in the USL Game of the Week on ESPNews.

The hosts opened the scoring just 12 minutes in as a long throw got the ball into the box, the Lights FC defense tried to clear but the header only fell to Alex Dixon who made no mistake with his volley. Just three minutes later Las Vegas was level when Carlos Alvarez bundled it home from a rebound off the post. Just before halftime Energy FC doubled it’s lead when Atiba Harris scored on his club debut, putting away a perfect cross from the left to the middle of the box from Alex Dixon.

OKC doubled the lead early in the second half, with another perfect cross from the left as Sebastian Ibeagha found Jaime Siaj at the far post, allowing him to score with a diving header. Francis Atuahene made it four in the 57th minute as he controlled a rebound from a save and shot into the empty net.

Las Vegas was determined to get back into the match and in the 65th minute, a missed clearance allowed Raul Mendiola enough space to shoot, sending it across the face of goal and into the back of the net. Mendiola made it a one-goal game as he used his footwork to open up space for a powerful shot.

Just when it looked like Las Vegas was back in the match Alex Dixon sealed his brace, putting away a through ball from Jose Barril from a tight angle in the 72nd minute. A smart bit of play from Christian Volesky wrapped up the win in stoppage time as he got on the end of a ball from Callum Ross heading it delicately into the back of the net. Despite the match being all but lost Mendiola wasn’t done taking advantage of a sleepy OKC defense to wrap up his hat trick, the first in Las Vegas Lights FC history.

USLSoccer.com Man of the Match:
Alex Dixon, OKC Energy FC – In a goal-fest Dixon was involved in three of his side's six goals, scoring two and providing an assist on another, also winning four of his six duels.

Raul Mendiola is DIALED IN.

Tune in for the #USL Game of the Week: https://t.co/XzbNYCzHZg#OKCvLV pic.twitter.com/w4Zt9K49L7

A Charlotte free kick was well saved by Nashville goalkeeper Matt Pickens but his defense didn’t react quick enough allowing the hosts to open the scoring in the 42nd minute. Cordell Cato got the rebound and crossed from the left to the far post where Kevan George was on hand to score his first goal for the club.

Nashville had more of the ball in the second half, but a strong Charlotte defense held out the visitors getting a vital win, a late red card to Caleb Calvert not enough to deter the Independence from the result.

USLSoccer.com Man of the Match:
Cordell Cato, Charlotte Independence –
Cato created two chances for the hosts, providing the assist on the only goal of the match, he also worked well defensively, making four interceptions.

VERY clutch save by the big man! #WeAreCLT

A brace to Gordon Wild sent the Charleston Battery past Indy Eleven with a 2-1 win at MUSC Health Stadium.

Charleston took the lead in the 22nd minute on an impressive strike from Wild, hitting it into the upper right corner from 20 yards. Indy Eleven beat the offside trap to equalize in the 58th minute when Ben Speas through-ball found Eugene Starikov allowing him to chip Odisnel Cooper. Only Taylor Mueller stopped Indy from taking the lead a minute later as he got back and cleared off the line.

Wild was at it again in the 85th minute as he made a good run at the Indy defense, sealing his brace with a strike along the ground that won the match for his side.

USLSoccer.com Man of the Match:
Gordon Wild, Charleston Battery -
Wild scored both goals for the Battery in a vital contribution for the side managing to get all three of his shots on target.

ATL UTD 2 was forced to hold off a late charge from Bethlehem Steel FC but did so successfully, managing a 2-1 win at Coolray Field.

The hosts' pressure worked in the 26th minute as a clearance was quickly played back forward allowing Brandon Vazquez to run onto the ball and place his shot perfectly. Oliver Shannon doubled the hosts lead and scored his first professional goal in the 50th minute with a well-taken strike from the edge of the area, through traffic. Good footwork from Steel FC's Derrick Jones in the 87th minute set up a thrilling finish as he created space for himself for the shot, which he sent past Alec Kann but it didn't matter as ATL UTD 2 held on for the win.

USLSoccer.com Man of the Match:
Oliver Shannon, ATL UTD 2 -
Scorer of what would prove to be the winning goal, Shannon was vital for the hosts, winning eight of his 10 duels.

87': NOT OVER YET!!! Jones collects the corner and fires home a left-footed shot!#ATLvBST 2-1 pic.twitter.com/RAg2bekw91