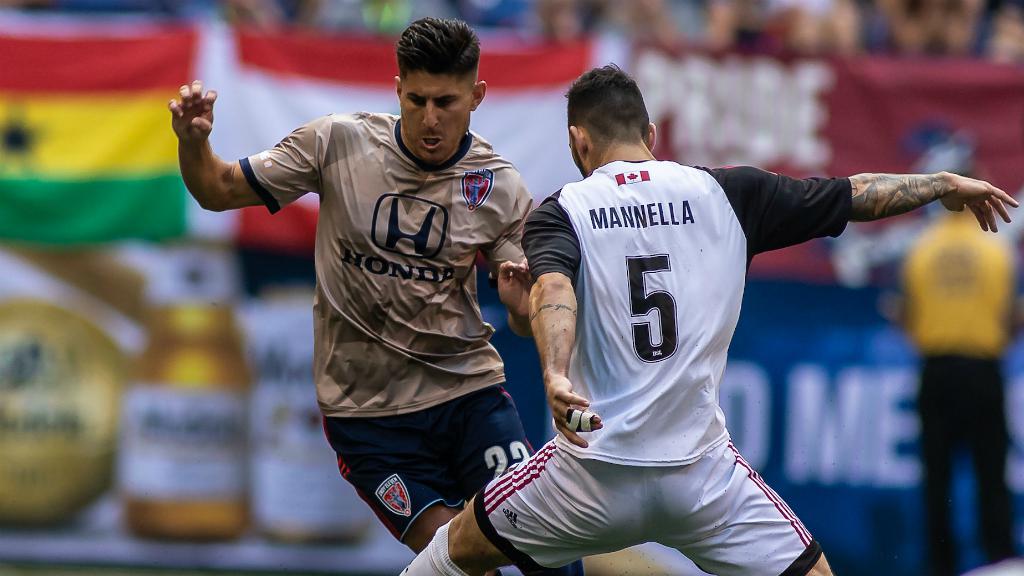 INDIANAPOLIS — Indy Eleven sits in fifth place in the tightly-packed Eastern Conference standings going into Saturday’s match against Charlotte Independence (7 p.m. ET | Match Center | ESPN+), which leaves the side both within reach of third place in the conference as this weekend's action kicks off but also with the possibility the side could slide out of the playoff positions entirely come Sunday morning.

Having picked up only one point from the first two games of its homestand at Lucas Oil Stadium after a big road victory in Nashville 10 days ago, the Eleven are aware of how close they are to fulfilling their potential, and the necessity of making it happen against a side that sits just one point and two positions back as the sides enter one of this weekend's key games in the race for the USL Cup Playoffs.

On Wednesday night in the club's 1-0 defeat against Ottawa Fury FC two substitutes, Tyler Pasher and Soony Saad came into the match and had an impact. Pasher and Saad combined for three shots, which gave Rennie something to look forward to as the two return from recent injuries.

“They gave us a lift. I think it was important to get them back in there,” said Rennie. “We have to monitor just how they recover after a game, but if they recover well hopefully they’ll get back in the lineup soon.”

With 62 percent of the possession against Ottawa on Wednesday and a 14-6 shot lead, Indy did a lot right, but was stymied by a stellar defensive effort by Fury FC that meant the Eleven's numerical edges didn't bear out in a positive result. That gave Rennie a clear idea of what needs to improve for Saturday.

“I think the fact we did dominate the game is a positive,” said Rennie. “I think a big thing is making sure we're concentrating when the games nil-nil and making sure we don’t lose that first goal because in the last two games we’ve had to chase the game and come back and that then means you can leave yourself a little bit open. It means they’ve got even more to defend.”

COMPETITION BOOSTING ROWDIES: The Tampa Bay Rowdies recorded their first home win since April 21 with a 3-1 win against Toronto FC II on Wednesday, a necessary victory for the side as it looks to get back into the playoff picture in the Eastern Conference. While the night was a historic one for Rowdies forward Georgi Hristov, who notched his club-record 58th goal in the contest, the outing also saw positive performances from recent newcomers Leon Taylor and Stefano Bonomo as the competition for attacking minutes within the squad continued to grow.

But while Taylor scored his third goal in as many games for Tampa Bay since arriving last month, the Rowdies are still looking to be more clinical in front of goal. The side's chance conversion-rate this season sits at 14.9 percent this season, down almost 2.5 percent from a season ago. While that still just puts the side in the top third of teams in the league, the Rowdies came away from Wednesday night's game in the belief they had left chances to put the game away sooner on the table.

“Without being disrespectful to Toronto because they’re a very young side with some really good players, but I think the score flattered them to be completely honest,” said Collins. “I think on another night, we take our chances and we win handily. Goals change games, we gave up a goal and it made it a tense evening for us, especially with the rain delay.”

Facing another team that has undergone a midseason coaching change in Louisville City FC this season on Saturday night at Al Lang Stadium (7:30 p.m. ET | Match Center | ESPN+), the need to be more clinical with their finishing is going to be paramount against a side that is tied for the sixth-fewest goals conceded in the league this season. After suffering a 1-0 defeat to the defending USL Cup champion at Slugger Field on March 31, the Rowdies are eager for revenge on their home turf.

“Playing Louisville is always competitive whether that is at our place or theirs,” said Collins. “They’ve had a coaching shakeup recently and we know what that can do to a squad. We’ll be looking to implement our game plan as always as home and focus on what we can do well. I feel like if we do our things right, the result will come.”

FLEXIBILITY HELPS HOUNDS: Having proven difficult to beat at the start of the season, Pittsburgh Riverhounds SC is now gaining momentum with four wins in its last five outings, a run of form that has seen the club move into second place in the USL Eastern Conference after Wednesday night's protracted 2-0 victory against North Carolina FC.

One of the keys to that success has been the ability to adjust strategically on the fly, which has helped catch opponents out, allowing the Hounds to take advantage of potential mismatches on the field.

“At halftime, coach changed the formation,” said Hounds winger Christiano François after Wednesday's victory against North Carolina FC. “It is a formation that we have been training and working on. We don’t have a specific formation, we have been switching it all the time.”

Despite having grabbed a halftime lead on a fine individual finish by François, the changes were needed to give the Hounds more control of the match. While the visitors ended up with more possession at Highmark Stadium at the end of the night, Riverhounds SC held the edge in both shots and shots on goal, with Kevin Kerr's finish adding an insurance finish to put the game out of reach.

"We got the goal. That was huge,” said Riverhounds SC Head Coach Bob Lilley. “The second half we came out, we addressed some things and I thought we were ready to go."

On a five-game unbeaten streak, this increased flexibility for the Hounds makes them even more dangerous, and a strong candidate to top the Eastern Conference sitting just three points back of FC Cincinnati with a game in hand as both sides face important road contests this weekend.