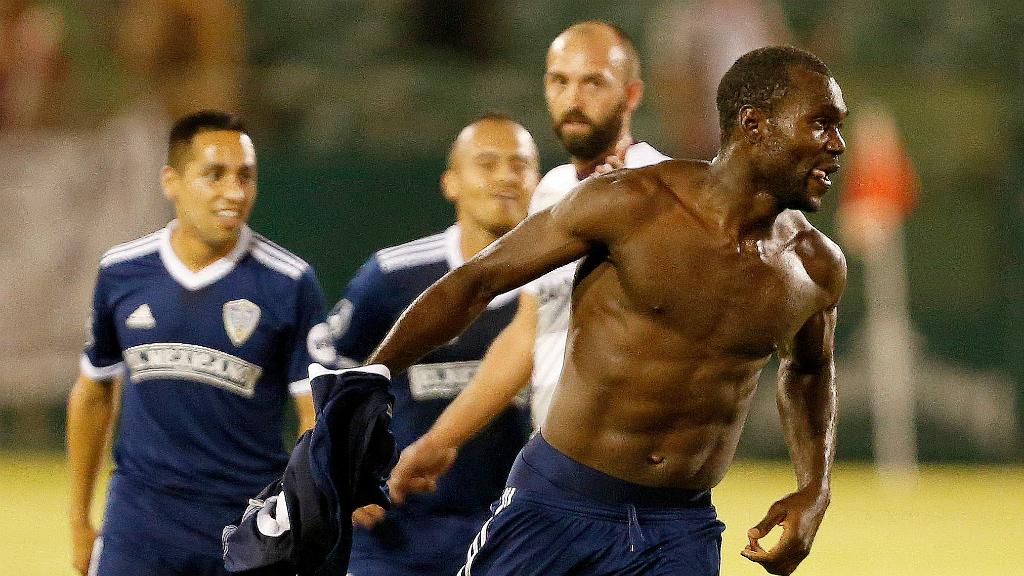 FRESNO, Calif — Fresno FC got a much-needed win on Saturday night as it earned both a first victory against Highway 99 Derby rivals Sacramento Republic FC and closed the gap on eighth-place Colorado Springs Switchbacks FC in the race for a place in the 2018 USL Cup Playoffs.

Franck Tayou scored the insurance goal in stoppage time after Juan Pablo Caffa's first-half finish had put the Foxes ahead, with the Cameroonian's wonder-strike providing a formal introduction to the club's home fans at Chukchanski Park. His 70-yard finish that looped over Republic FC goalkeeper Josh Cohen in stoppage time earned the No. 5 spot on ESPN's SportsCenter Top Ten on Saturday night, with Tayou hoping it would be the first of many for his new club.

“He missed the easy one and then he does that, which I am sure is going to be viral all over the world,” said Fresno Head Coach Adam Smith. “I’m delighted from him and there is more to come from him.”

If the sign of a good striker is never being satisfied, Tayou certainly meets that criteria as he used his earlier miss, a much simpler chance, to motivate himself to put away his second opportunity.

“Feels great especially after missing the first one,” said Tayou. “But at the end of the day, sometimes to score you have to miss, you know what I mean? So after missing that one, I was a bit more confident taking a chance like the one I did. So I look at it in a positive way, I look at it as if I can make those easy ones most of the time it’ll be alright.”

As important as Tayou's presence was to the Foxes attack, another at the other end of the pitch also made a big difference in the match was that of Foxes defender Zach Ellis-Hayden, who made eight tackles, only giving away one foul in a strong display that led the back line.

“We miss him when he is not available. Had some injury issues. He did great tonight,” said Smith. “I actually sat out for most of the first half because I wanted to have a look at players and movement of players and collective movement of the back line and the midfield line. I saw what we think we see from the sideline and it reaffirmed what areas we need to improve on. I spoke about those at halftime on areas we needed to improve and the guys responded.”

SUBPAR 1868 FC CONTINUES STREAK: Reno 1868 FC managed a 1-0 victory over Portland Timbers 2 on Saturday night at Greater Nevada Field to extend its league-best undefeated streak to 13 games in spite of putting in one of its slacker performances of the season. Reno gave away 17 interceptions overall, but thanks to a late game-winner by Danny Musovski continued its rise up the Western Conference as it took a second victory against T2 this season.

“It’s one of those games we hope we don’t have to think about ever again. We’ll take those three points and try to move on and get ready for Tuesday,” said 1868 FC midfielder Antoine Hoppenot. “It was a tough game for a lot of guys. The energy was low but we found a way to get the three points which was important.”

The eventual winning goal came from Musovski in the 81st minute, with the second-half substitute having given the hosts a little more life as he moved into a tie for the team's goal-scoring lead with Brian Brown. Both Musovski and Brown have scored five goals this season for Reno, with both having provided important boosts off the bench for the side after Brown scored in each of the club's three games prior to Saturday night after coming on as a substitute himself.

“It’s a good problem to have. I’d rather have starters scoring as well but there is so much competition in our forward position,” said Reno Head Coach Ian Russell. “I think the first striker that starts wears the center backs down and the second striker ends up scoring.”

That depth will be tested this week, with the team having a quick turn-around as it welcomes Western Conference-leader Real Monarchs SLC on Tuesday night (10:30 p.m. ET | Match Center | ESPN+) in one of Week 17's highest-profile contests. With a nine-point gap to the Monarchs from Reno's current fifth place , 1868 FC could make a big statement with a win but will have to work hard to get a result in the first meeting between the clubs this season.

“It’s about getting rest and recuperating,” said Russell. “Real Monarchs SLC is a good team but I think it’s something we’re up to the challenge too. We’re looking forward to it.”

GALAXY II YOUNGSTERS PROVE KEY AGAIN: The LA Galaxy II have made a habit recently of explosive attacking performances at StubHub Center, and Sunday night's 5-3 victory against Seattle Sounders FC 2 was the latest example of that prolificacy. Yet again it was young players starring for Los Dos with Mexican U17 international Efrain Alvarez scoring two goals again, but it was another youngster in Alex Mendez who also made a big impression as they United States U17 international scored his first professional goal with a sweetly struck free kick on the hour-mark.

“Alex is a really multi-functional type of player. He can play deep to help us out at the back,” said Los Dos Head Coach Mike Muñoz. “He can play higher up the field because he’s very dangerous with his passing ability and his ability to shoot. He’s really that complete type of midfielder that we are looking for. I’m really happy that he got his first goal because he deserves it.”

Young players like Mendez and Alvarez have proven vital for Los Dos this season, with the club's young standouts the key to most of the exciting play that has seen the Galaxy II score 20 goals in eight home games this season. That's tied with Phoenix Rising FC for most in the Western Conference in that category, and trails only the New York Red Bulls II's 22 home goals overall as the likes of Alvarez, Mendez, Ulysses Llanez and Ethan Zubak have combined when available to make one of the more potent attacks in the USL.

“When we’ve played these guys this year, we’ve been dangerous, we’ve scored a lot of goals, we’re exciting,” said Muñoz. “I’m really happy with the performance and the energy, especially after coming back from a tough road trip. It was great to see this kind of response.”

Sitting eight points out of the playoff places in the Western Conference at the halfway point of the season it's still going to be an uphill battle for Los Dos to make their fourth USL Cup Playoffs appearance in five seasons, but the club's attack certainly has the potential to play spoiler for teams above it in the conference standings. One such match arrives next Saturday when the Galaxy II visit Orange County SC for the the third and final 405 Derby of the season (10 p.m. ET | Match Center | ESPN+).

“That will obviously be an extremely tough game since it’s a derby,” said Muñoz. “We have to make sure that we clean up our defense, and that’s a whole collective effort. That will make us much tougher to play against. Then obviously continue to execute on the goal-scoring front.”