TORONTO – While Wednesday night was Toronto FC II’s first game in its history at Lamport Stadium in the south of the city, the game had the feeling of a homecoming for some members of the club’s squad.

“This stadium is very nostalgic because as a 10-year-old boy watching my brother play for the Academy when he was on the first Academy team and then eventually I played my first game for the senior Academy here back in the CSL days,” said Toronto forward Jordan Hamilton. “It feels good to be back at Lamport. A lot of groundwork was put in here from me and my family, so it’s nice to play here.”

Whether it was the familiar surroundings, a new sense of confidence that the side has been working on building, or a combination of the two, the Reds made their debut at their home for much of the remaining 2018 season a memorable one as Hamilton’s outstanding goal with 15 minutes to go earned a 3-3 draw against Eastern Conference-leader FC Cincinnati, providing another twist into the race for first place in the conference standings.

It had certainly looked as though FCC was on its way to a comfortable victory at halftime. While U.S. U19 international Ayo Akinola had leveled for Toronto in the 28th minute after Nazmi Albadawi had opened the scoring for FCC after just seven minutes, the visitors scored twice in quick succession through Emery Welshman and Emmanuel Ledesma – his team-leading eighth goal of the season – to take a two-goal lead at the break.

But while Cincinnati held an 11-5 advantage in shots in the first half, the roles were reversed after the break. Toronto became the aggressor and outshot its visitors 10-1 in the second half. Goals by Robert Boskovic with 20 minutes to go and Hamilton’s remarkable volleyed finish five minutes later leveled the score, and the hosts almost grabbed their first victory of the season as Hamilton hit the left post in the 86th minute with a flicked header off a back-post corner delivered from the right by Ryan Telfer. 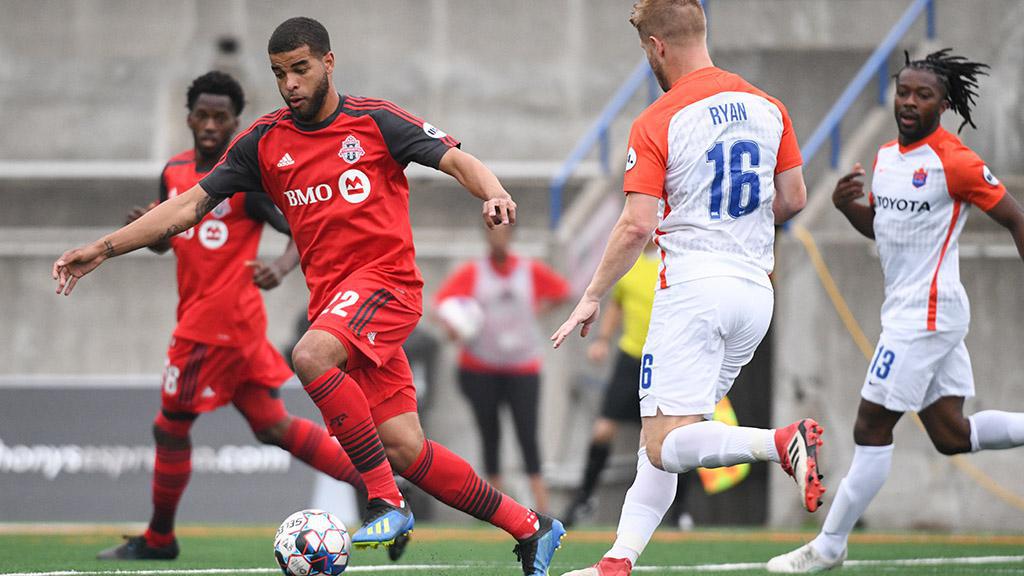 After suffering eight consecutive defeats prior to Wednesday night, finding a level of belief that the side can compete with the top teams in the Eastern Conference has been the key for Head Coach Michael Rabasca since his appointment on June 4.

“I think our team is good enough,” said Rabasca, who claimed his first point as the club’s coach in the draw. “I think that’s what we were trying at halftime, but they weren’t playing with confidence, near the aggression or courage that we like to see. So, with young players to instil in them and show them where those moments do come from, it’s our job, an important piece.

“I feel like the goals we gave up were us just not believing in ourselves. Once we can erase those individual mistakes then I think we can get the three points instead of a draw. I feel like we were the better team.”

And while Toronto is still looking for its first victory this season, after Wednesday night’s performance the feeling within the group is that moment may not be too far away.

“There is a belief now in the team that [Rabasca] instilled and maybe wasn’t there before with the younger guys,” said Hamilton. “We are going in every game now with a plan, with an intention of playing hard and being hard to play against, and I think it’s working. You can see the fight in the guys compared to the past years and it’s a refreshing feeling.”