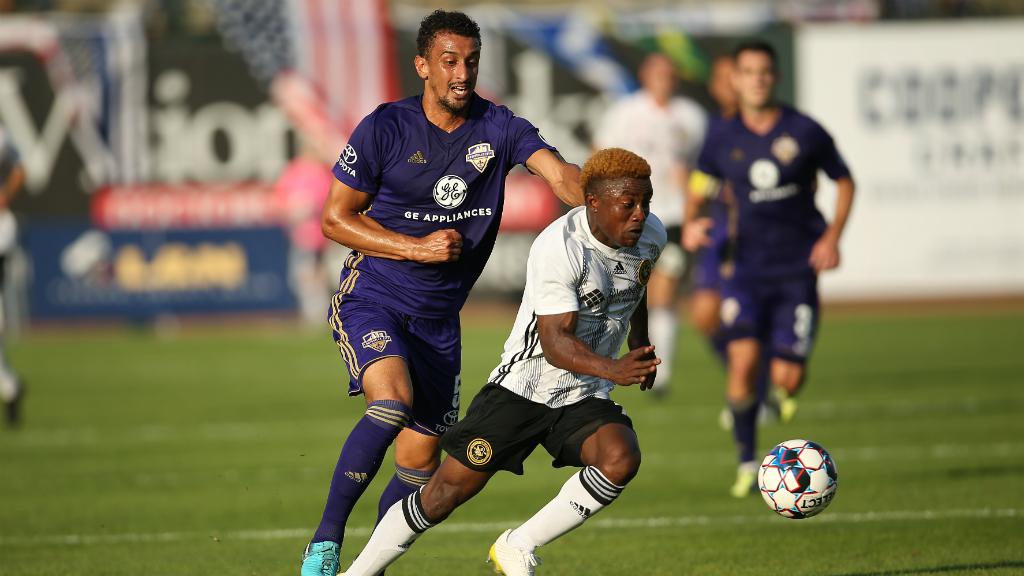 1. Toronto FC II scored two late goals to pick up just its third point of the season as it held Eastern Conference leader FC Cincinnati to a 3-3 draw at Lamport Stadium after FCC had held a two-goal halftime lead on the road.

2. After only being appointed as Head Coach of Tulsa Roughnecks FC on Monday, Tulsa native Michael Nsien had a dream start in his Head Coaching debut as his side secured its first win of the season.

3. Pittsburgh Riverhounds SC kept its undefeated road record going with the dramatic win against Louisville as Kenardo Forbes' first goal of the season gave the visitors victory at Slugger Field. The Hounds are now just three points back of Eastern Conference-leader FC Cincinnati with a game in hand.

Tulsa Roughnecks FC broke through for its first win of the season managing a strong 2-0 victory over a ten-man LA Galaxy II at ONEOK Field.

Tulsa opened the scoring through Jhon Pirez for his first USL goal Pirez was played through by Joaquin Rivas and saw his initial effort saved by Wade Hamilton only for the ball to stay with Pirez which allowed him to pass into the back of the net.

Los Dos’ chances took a big hit in the first minute of the second half when Hugo Arellano brought down Pirez who was running in free on goal, giving Arellano a red card. That man advantage told in the 52nd minute when a switch of play from Ivan Mirkovic found Paris Gee on the left, which allowed him to run in on goal, cutting inside the defender and hitting a powerful shot.

USLSoccer.com Man of the Match:
Joaquin Rivas, Tulsa Roughnecks FC –Rivas may not have got credit for an assist on the opener but it was his pass that created the opportunity, just one of five chances he created in the match.

FT - That does it. The breakthrough has come. 3 points in the bag for Tulsa! They finish the night with a great run out, bagging two class goals and keeping a clean sheet! #TULvLA #VamosTulsa pic.twitter.com/E92D1Qt8oH

52' GOAL - He's shown a lightning right foot a time or two tonight, and this time he finds the target. GEE doubles the advantage! 2-0 #TULvLA #VamosTulsa pic.twitter.com/4nmGuof8Xi

The Charlotte Independence finished with nine men as the Tampa Bay Rowdies came from 2-0 down to earn a 2-2 draw at Sportsplex at Matthews.

Charlotte’s pressure, with 64 percent possession, finally told in the 57th minute after a long run from Cordell Cato allowed him to square from the left to the middle of the box for Jorge Herrera who scored with a powerful shot.  Cato turned scorer in the 64th minute when Herrera’s touch drew the Rowdies defense which left Cato open who shot from a tight angle with too much power for Akira Fitzgerald.

Those goals seemed to open the floodgates with Tampa pulling a goal back in the 66th minute after a ball into the box couldn’t be cleared, falling to Tamika Mkandawire who slammed it home from close range.

One minute from time the Independence were reduced to ten men when Joel Johnson earned his second yellow card in a space of three minutes. The Rowdies immediately took advantage, with the ball from the free kick falling to Dominic Oduro who launched a powerful half-volley that saw him score on his Rowdies debut.

Things got even worse for Charlotte in stoppage time when Donnie Smith was shown a red card for violent conduct, reducing Charlotte to nine men but they held on for the point with little time remaining.

USLSoccer.com Man of the Match:
Jorge Herrera, Charlotte Independence –Scoring a goal and providing an assist Herrera was dangerous all night for the Independence creating three chances.

Cordell Cato finds Jorge Herrera for his 7th goal of the season!!#WeAreCLT pic.twitter.com/lsQlVDg7Cu

FC Cincinnati took advantage of a defensive mistake in the seventh minute to open the scoring as Emmanuel Ledesma cut the ball back to Nazmi Albadawi who made no mistake. TFC II responded, getting an equalizer in the 28th minute after good passing switched the play from the left to the right which saw Dante Campbell cross to the center of the box, finding US Under-19 national team player Ayo Akinola who powerfully headed it home on the run.

The visitors restored their lead in the 38th minute after a long ball caught out the TFC II defense. Emory Welshman celebrated his return to his hometown with a goal, putting the ball away after Albadawi cut the ball back for him in space at the top of the box. That lead was doubled minutes later as Welshman turned provider squaring for Welshman whose powerful shot made it 3-1.

Toronto made things interesting with 20 minutes to play, when Robert Boskovic headed home Ryan Telfer's perfectly curled free kick, cutting the deficit in half. It only took three minutes for Toronto to score again, Steffan Yeates squared the ball from the left for Jordan Hamilton who ran onto the ball and hit a stunning half-volley with power which hit the back of the net.

USLSoccer.com Man of the Match:
Jordan Hamilton, Toronto FC II - Hamilton scored a stunning goal to seal his team a draw, and was vital on both sides of the pitch, managing an 89.3 percent passing accuracy and two clearances.

Pittsburgh nearly opened the scoring in the 23rd minute when Neco Brett sent a through ball for Christiano Francois who got through one-on-one with Greg Ranjitsingh. But the Louisville keeper stood tall, Ranjitsingh making an impressive double save to keep it scoreless. Louisville thought it had the opener in the 58th minute when Paolo Del Piccolo had the ball in the back of the net but his effort was denied for a foul on Hounds' keeper Dan Lynd.

With two of the strongest teams in the league doing battle it was unsurprising that it took until the 79th minute for the opener. The Pittsburgh defense ran in behind the Louisville defense, which was scrambling, blocking the ball into the box only for it to fall to  Forbes who sent it home, taking a deflection on the way in.

USLSoccer.com Man of the Match:
Dan Lynd, Pittsburgh Riverhounds SC -
Lynd was unbeatable in the Riverhounds' goal, making five saves, a number of them stunning and late, vital to giving his team a point.

FULL-TIME: Not our night.