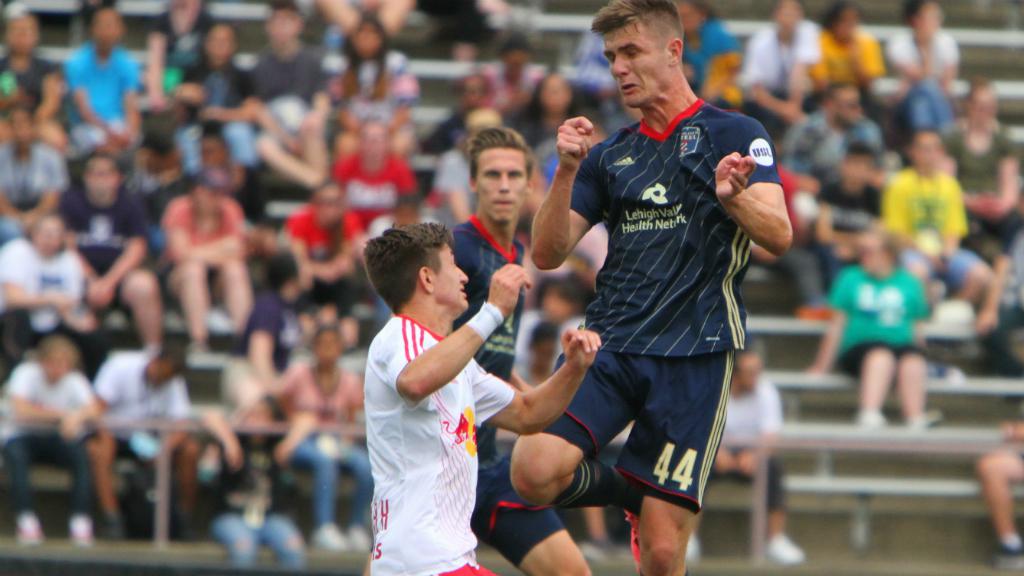 BETHLEHEM, Pa. — Behind by two goals with three minutes to play all seemed lost for Bethlehem Steel FC but the hosts salvaged a point in a dramatic finish, claiming a 2-2 draw against New York Red Bulls II at Goodman Stadium on Wednesday night. New York took the lead in the 12th minute when NYRB II youngster Ben Mines drew a foul in the penalty area, allowing Stefano Bonomo to step up and send his penalty kick just out of the reach of Steel FC goalkeeper John McCarthy to open the scoring. That penalty saw the visitors push for a second, but after a good period of pressure for New York, Steel FC came more into the match, but the Red Bulls II defense kept the hosts without a shot on target in the first half. In the 39th minute Drew Skundrich should have equalized for Bethlehem when he got on the end of a perfect cross to the penalty spot only to send his header agonizingly wide. In the final minute of the first half New York thought it had a second penalty kick after what appeared to be a handball in the area, but the assistant referee quickly stepped into help reverse the decision as the ball came off the defender's thigh. The Red Bulls II continued to press in the second half, which limited Bethlehem from seeing enough of the ball to have an impact, and as Steel FC pushed for an equalizer late on the visitors took advantage as Bonomo doubled the lead in the 84th minute as he stole possession on the edge of the area and ran through the defense before finishing. The goal appeared to have sealed victory for the visitors, but Bethlehem made it interesting four minutes later as Matt Mahoney headed home from Chris Nanco’s corner. Steel FC then completed its comeback in the fourth minute of stoppage time when Nanco squared a ball from the left to the far post where James Chambers was on home to stab it in from close range.

Chris Nanco, Bethlehem Steel FC — Just when it seemed his team would fall, Nanco weaved his magic, providing two game-saving assists as part of a match where he created three chances thanks to three successful crosses.