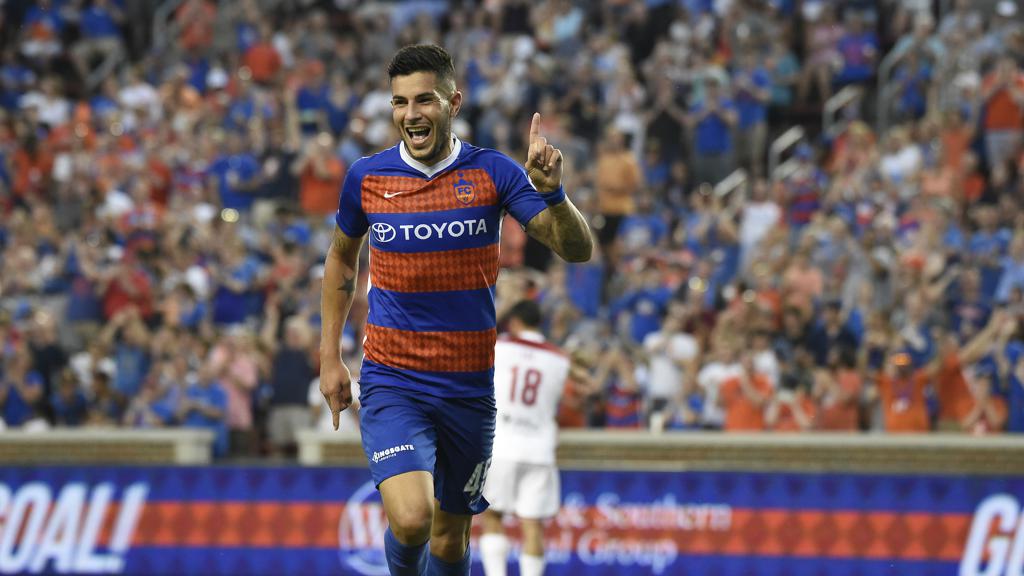 CINCINNATI — With a busy schedule in recent weeks FC Cincinnati has been shuffling the deck in defense to try and give everyone enough rest. That rotation worked on Saturday as Cincinnati took a 4-0 win against the Richmond Kickers in front of a season-high attendance of 28,026 at Nippert Stadium as Paddy Barrett and Justin Hoyte cycled into the lineup to join Blake Smith and Dekel Keinan, who had also started in the club's 2-2 draw with Bethlehem Steel FC the prior Wednesday night.

“I think we have a great, strong unit no matter who comes in and plays,” said Hoyte. “[Matt] Bahner’s played in a few games and has done fantastic when he’s come in. Paddy [Barrett]’s done fantastic, Dekel [Keinan]’s done fantastic. Forrest [Lasso]. Blake [Smith] has done perfectly well on the left, and Lance [Laing] when he’s played. So defensively, we have a fantastic unit. We work every day in training. We’re a tight group.”

The win pushed Cincinnati to a 3-2-2 home record, getting above .500 for the first time this season, and given the measure of the performance it has led to hopes of improvement at Nippert Stadium that was being greatly outstripped by FCC's road performances. Now with a two-match winning run, and with three wins out of its last five on home turf, Nippert Stadium is becoming a tougher place to play.

With a 10-day break before it returns to action against on the road against Toronto FC II on June 27th match, FCC is now looking forward to what will be its first extended break of the regular season. With a six-point lead at the top of the Eastern Conference, and an important run of home games coming up in July, getting the chance to recharge the batteries is coming at a good time for Head Coach Alan Koch's side.

JAMAICAN CONNECTION BOOSTS HOUNDS: The two leading scorers for Pittsburgh Riverhounds SC this season, Neco Brett and Romeo Parkes, were paired together in the starting lineup for the first time this season in Saturday's game against the New York Red Bulls II, and the Jamaican duo came through with flying colors as they contributed all three goals in an emphatic victory at Highmark Stadium against the New York Red Bulls II before the biggest home crowd of the season on the banks on the Monongahela.

It was the second-biggest win the side had achieved all season, with only the club's 4-0 win against Toronto FC II on April 7th surpassing it, but coming against a side like the Red Bulls II it comfortably felt like the club's best performance of the season so far.

“It’s a good feeling,” said Parkes about his partnership with Brett. “We’ve been playing together since youth days in Jamaica, so to come here and play with him is a really great feeling.”

Parkes has scored three goals this season, already matching his total of last season as his 65th-minute header sealed the 3-0 scoreline.

“It’s a great feeling. Coach has been begging me for the past four months to score a goal, and I feel so excited scoring one tonight,” said Parkes. “We worked hard for this upcoming week, and Red Bull is a good team. We know we had to go out and fight, and we go out and get three goals.”

With just one loss so far this season, the balance between the attack and defense has been key to the Hounds' success. That’s something that Pittsburgh Head Coach Bob Lilley has always expected of his teams, but with Brett now tied for the league-lead with eight goals this season the side has remarkable attacking punch that has led to a +10 goal differential, which is second only to FC Cincinnati in the Eastern Conference.

“The only thing coach has been stressing about is trying to be good at both attacking and defending,” said Brett. “He knew this was a good team, so he had to make sure we were prepared for this game.”

INJURIES TEST CHAMPIONS: Missing three key attacking players in Richard Ballard, Luke Spencer, and Cameron Lancaster, Louisville City FC's depth was tested on Saturday night, but while the club's attack came through in a 3-3 draw against Penn FC it was instead defensive letdowns that saw the hosts drop points for the first time at Slugger Field this season.

After going behind after just 14 seconds when Penn's Lucky Mkosana bulled his way through the defense to finish, the defending champions fought back with a stunning first-half performance that saw Ilija Ilic score twice after Paolo DelPiccolo had leveled the score inside the opening 10 minutes. As a result, Louisville went into the half with a 3-1 lead and were cruising to a sixth consecutive home win in 2018.

“Yeah, look Ilija [Ilic] took his goals really well. Fantastic, so great movement from the players. I thought – first half especially – we were a real threat, but that’s not a surprise to me,” said Head Coach James O’Connor. “I know how good the players are. We’ve got really good players, so I think for me that wasn’t the surprise. It was great to see that, but we see so much of it in training.”

But then things started to go wrong as Penn applied far more pressure on its hosts. A second goal by Mkosana got the visitors back into the game just past the hour-mark before Prince Baffoe's equalizer with six minutes to go left the home crowd of almost 8,000 fans stunned.

With Penn holding a 12-2 shot advantage in the second half, O'Connor felt his side looked to protect its lead too soon, instead of continuing to press home its advantage.

“We seemed to almost protect what we had rather than stay on the forefront and trying to continue. I think, as I said, you need to give Penn a lot of credit,” said O’Connor. “They gave us a lot of problems and in the end, Greg [Ranjitsingh] makes a great save and we’ve gone from a game where we were in control to maybe even losing. At the end, I’m grateful for Greg for being able to make that save.”

With Louisville set to square off with Nashville SC on Wednesday night in the Round of 16 in the 2018 Lamar Hunt U.S. Open Cup, shaking off the poorest defensive display of the season is going to be key for the defending USL Cup champion in the next few days.