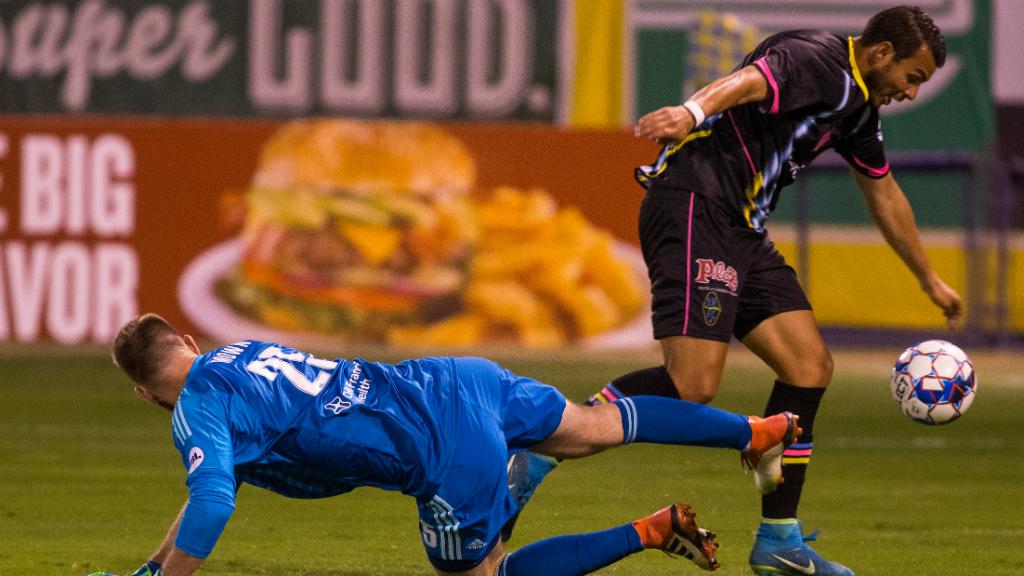 LAS VEGAS — Las Vegas Lights FC proved too strong for Seattle Sounders FC 2 managing an impressive 4-1 win before a crowd of 6,785 at Cashman Field on Saturday night. After a rough loss to Phoenix Rising FC midweek, the hosts were eager to bounce back and entertain their home fans and went on the attack from the opening whistle, trying to manufacture a goal. That pressure told in the 17th minute as Sammy Ochoa was quickest to react to a defensive mistake, managing to gather the loose ball, round Calle Brown in the Seattle net and bury it into the empty net. After going behind S2 went on the attack and in the 33rd minute, Las Vegas’ debutant keeper Angel Alvarez had to be at his best to keep his side in front, making an impressive double save, first on David Estrada on a tight angle and then stopping the rebound. Ochoa recorded his brace moments after that after another defensive mistake, pouncing upon Brown’s heavy touch, blocking the clearance into the back of the net. Las Vegas added to its lead before the break as Joel Huiqui was next to get on the act as Lights FC goalkeeper Alvarez's long ball into the Seattle penalty area found Huiqui’s feet before  the experienced defender used his strength to open up space for the shot that hit the back of the net. S2 pegged a goal back in first-half stoppage time when Ray Saari was able to find space just outside the penalty area to hit a powerful strike that Alvarez just couldn’t get to. Just four minutes into the second half Las Vegas added another when Zach Mathers haunted his former club, taking the ball from Ochoa, nutmegging his defender on the turn and sending it past Brown. After a frantic opening to the half things calmed down a little for the rest of the half as S2 tried to attack, but the visitors rarely troubled the Las Vegas defense which also performed well, and helped the side to its second consecutive home win.

Sammy Ochoa, Las Vegas Lights FC — Ochoa took his opportunities in this match, managing two goals and one assist with five shots on target to make life difficult for the Seattle defense.