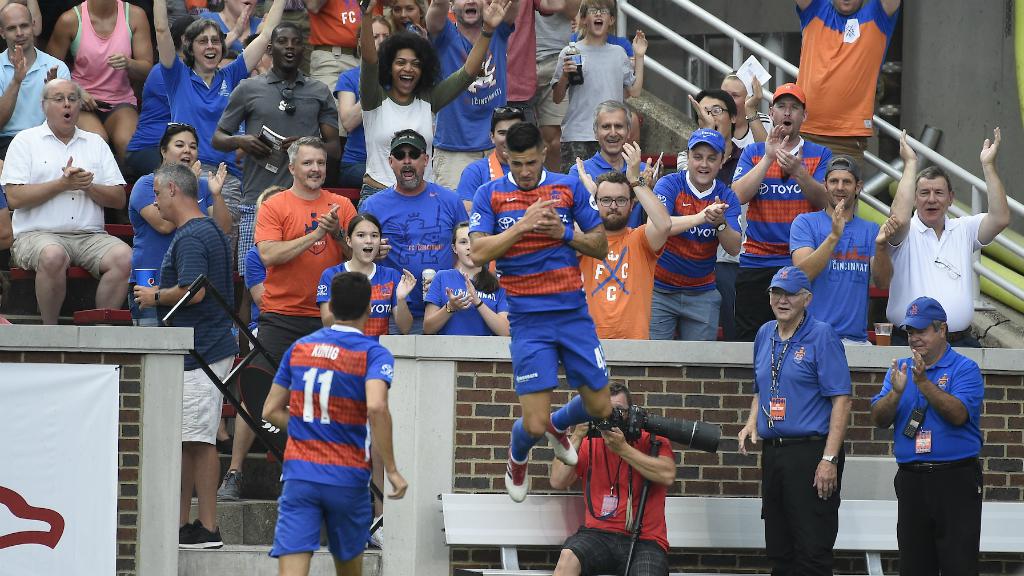 CINCINNATI — FC Cincinnati got things going early and never looked back as it powered to a 4-0 victory over the Richmond Kickers in front of 28,026 fans at Nippert Stadium on Saturday night. FCC opened the scoring in the eighth minute through a moment of individual brilliance from Emmanuel Ledesma, who spotted Richmond goalkeeper Travis Worra off his line and hit a powerful dipping shot from a tight angle which snuck in under the crossbar to get the big crowd even louder. The hosts continued to hold the bulk of the possession after taking the early lead, continuing to look dangerous, but the Kickers looked to hit on the counterattack and were charging forward whenever they took back possession. But Cincinnati's possession told in the 36th minute when Nazmi Albadawi was afforded just a shade too much space on the edge of the area, which allowed him to place a shot just out of Worra’s reach to double the lead. The hosts made it three when a perfect through-ball from Justin Hoyte allowed Danni Konig to break the offside trap, getting through one-on-one with Worra to all but seal the match, and score his seventh of the season taking back the club lead from Ledesma. But Ledesma responded, leveling Konig for the club lead in the 67th minute with another strike from distance, this time centrally as his shot just in front of Worra to wrap up his brace, and the final score.

Emmanuel Ledesma, FC Cincinnati — With a brace Ledesma impressed throughout the match, not just managing two goals but he also won nine duels and made seven tackles.