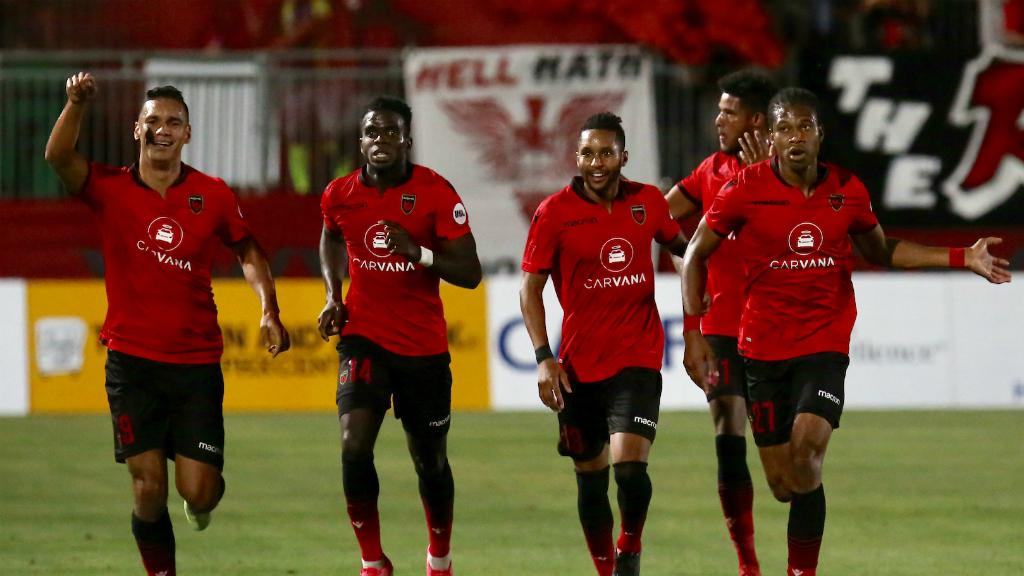 PHOENIX — It’s been a big week for Phoenix Rising FC, and in addition to an unexpected coaching change following former Head Coach Patrice Carteron’s departure to Egypt there has been the small matter of two home outings that gave the side a chance to close the gap on Real Monarchs SLC at the top of the Western Conference.

As Rick Schantz took charge on Tuesday, he couldn't have asked for a better display the following night with a 4-0 win against Las Vegas Lights FC on Wednesday night closing the gap on the Monarchs, who fell earlier in the night against the Swope Park Rangers.

“It was fantastic,” said Schantz, who will take charge of the side for at least the remainder of the season. “The last three weeks we've really focused on multiple systems of play. The original plan for tonight was actually not to play that way. But I'm so proud of these guys.

“It just shows the work that Patrice and this staff put in. The phrase I've used a lot this week, other than family, is offensive defending. We want to step up and win balls in the opponent's half and I thought they were fantastic. They did exactly what I wanted them to do.”

The word family has been used a lot within Rising FC's camp this week, symbolizing the manner in which the team has stayed together in a way that was vital to put in a big performance despite Carteron's departure. The collective bond within the group saw a performance in which Phoenix flew forward in attack to produce an impressive display against their visitors.

“Our focus as a staff this week was to tell the players that it's not about the coach. It's about the team and they have to be together and be a family,” said Schantz. “Today before the game I said I would die for this crest. I'm going to give everything I can for them. I want to be a servant to the players. And all I ask is them that for 90 minutes, they give all they can for the crest. Tonight, I thought you saw the talent that we have and what they are all capable of. So we set the bar pretty high.”

Despite the family nature of the team, any team would feel a big loss losing its main leader, just as when a family member moves away to another country. That motivated the team to show it could keep going even after the departure.

“It’s hard man. Cause you know the impact, it’s all in the history books what he’s come the last year and what he’s done for the club in not even a year so that was a big blow for us,” said forward Jason Johnson. “Tonight was a big night to come home as a group, just show ourselves and what we have learned from Patrice over the year. What’s still inside the locker room is still inside the locker room and we proved that tonight. By the way, thank you very much, Patrice, we miss you here man. All the best.”

DERBY LOSS HURTS FRESNO: If there’s one game Fresno FC fans would have circled on their calendars when the schedule for the 2018 season was released it was the contests against regional rivals Sacramento Republic FC. That was certainly the case for Head Coach Adam Smith, who came to Fresno having been part of Republic FC's coaching staff from the club's inception, and eager to get one over on his former club.

After Sacramento came away with a 1-0 victory at Chukchanski Park in the first league meeting between the clubs, Smith was reflective on the experience.

“It is the closest USL team to Fresno, there are obviously a lot of players in both team that played for Fresno or Sacramento and now are in the opposition. Myself, I have been the head assistant at Sacramento. It is great, it makes a good rivalry,” said Smith. “The fans are involved and make for a good atmosphere. It was not a bad crowd for a Wednesday night, with the high temperature as well. When we get a weekend game against them, we should have a really good crowd, good atmosphere. Hopefully, over the course of the three games we play, we can come out on top. We just have to rebuild, and rest now, and look forward to our game on Sunday.”

Smith's second-half adjustments, which saw the introduction of midfielders Danny Barrera and Rony Argueta to try and earn more possession for his side and Christian Chaney to add scoring punch against a solid Sacramento side, didn't quite pay off for the Foxes on Wednesday, but after finishing with a 17-13 edge in shots the side is hoping it can carry some confidence into Sunday's game with a strong Swope Park Rangers side (9 p.m. ET | Match Center | ESPN+).

“The changes that I made, I think it really helped,” said Smith. “Chaney, Danny Barrera and Rony, they changed the game. That is what a sub is supposed to do. We started to create. Maybe I could have made the sub a little bit sooner, maybe at half time. Could have made one or two changes and given them the energy they brought to the second half. But the guys said they had a few more minutes left in the tank. So we gave them the minutes to see what happens. But it did not happen, so we made the changes.”

REAL SEEKS TIGHTER DISPLAY: Sometimes the margins between success and failure can be very narrow in soccer, where one mental error or defensive mistake often makes a difference.

After suffering a 3-2 loss to the Swope Park Rangers on Wednesday night, Real Monarchs SLC certainly felt it was made to pay by its hosts at Children's Mercy Park.

“Soccer is a game of inches. Anytime you make a mistake, I think you are going to be punished by it, especially by Swope,” said Monarchs defender Konrad Plewa. “It is a good quality side and you just try to limit those kinds of mistakes in the 90 minutes. Unfortunately, today we made a few too many and it cost us.”

With the Western Conference-leaders set to complete their trip to the midwest on Saturday night against Saint Louis FC (8:30 p.m. ET | Match Center | ESPN+), there is little time for the Monarchs to dwell on that performance as it looks to maintain its advantage at the top of the standings. Real has not lost consecutive matches since September 24th, 2016, something that gives the side confidence it will be able to produce a positive response at Toyota Stadium – Saint Louis.

“I think we have shown this season we rebound,” said Plewa. We are looking to do the same thing. Try to forget this game and focus on the next game at hand in Saint Louis.”

That will not be an easy match, taking on a Saint Louis side that has both lost only once at home this season and that enters on a two-game winning run. But with only two days between matches time is at a premium and the focus is on getting the mentality right for that rebound.

“There is no time to prepare too much,” said Monarchs Interim Head Coach Jamison Olave. “It is more mentally getting the guys ready for the next game. The next game will be a really hard game.”