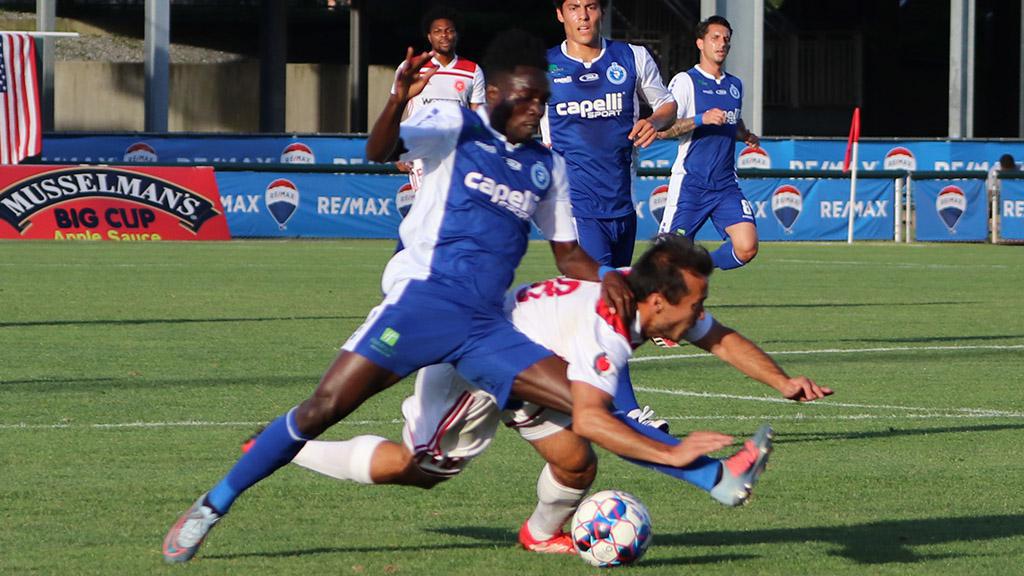 HARRISBURG, Pa. – Penn FC struck twice in the second half to claim back-to-back victories for the first time this season in a 2-1 victory against the Richmond Kickers at FNB Field on Tuesday night. Neither side produced much in attack early, but Richmond almost took the lead in the 26th minute as a smart build-up set up Chris Osei-Wusu only for Penn goalkeeper Romuald Peiser got just enough of the shot as he came off his line to turn it wide of the right post. Penn’s first threatening chance came off a corner in the 34th minute as Isaac Osae put a header just wide of the left post, and Aaron Dennis fired a low finish from the right side of the penalty area into the side-netting six minutes later, but the Kickers hit the crossbar six minutes into the second half as Luiz Fernando was released down the right to cross for Brian Shriver, only for the veteran’s first-time finish came back off the woodwork. Penn took the lead in the 56th minute, however, as Osae put away the rebound from Harri Hawkins’ initial effort from a free kick, and while Shriver almost answered for the Kickers seven minutes later as his free kick was tipped over the crossbar by Peiser to keep the hosts ahead, Freddie Opoku twice gave Penn a chance at an insurance goal, firing just wide with 14 minutes to go and then forcing a good save from Kickers goalkeeper Travis Worra. The hosts finally found their second of the night off the ensuing corner kick, however, as Dan Metzger’s diving header off Richie Menjivar’s cross found the bottom-left corner, and that goal proved important when Heviel Cordoves scored in the fourth minute of stoppage time for his second goal in as many games only for time to run out for the visitors before they could find an equalizer.

Richie Menjivar, Penn FC – Menjivar pulled the strings well in midfield for Penn, completing 40 of 45 passes and recording four key passes and one assist to help the hosts earn an important victory.