As the USL reaches an attendance landmark, a big weekend for players facing former clubs 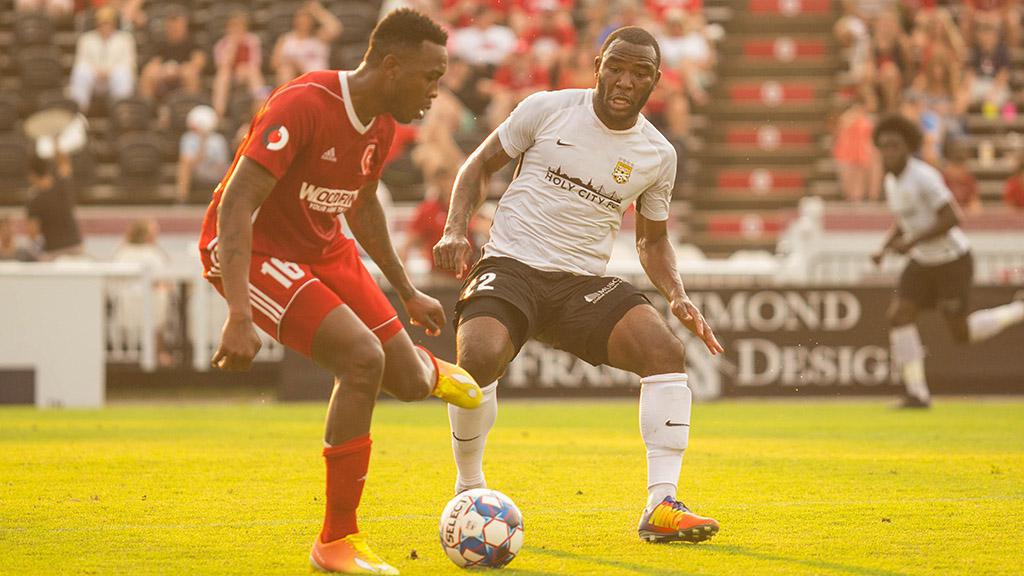 With the amount of offseason player movement that occurs in the USL on an annual basis, it’s rare that there’s a week goes by where players aren’t squaring off with a former club, but this past weekend added to the lengthy list that’s built this season filled with players who have come up big for their new clubs against their former employees. As the league reached another attendance landmark in record fashion, here are 11 things we took away from the past week in the USL.

1. ONE MILLION UP: The year-on-year rise in attendance across the USL has continued apace over the first three months of the new season, so it came as no surprise that after setting a single-week attendance record five weeks ago the league reached the one-million mark in total attendance for the season in record fashion on Saturday night. It took just 13 weeks for the USL to reach that mark, three weeks sooner and in 27 fewer games than a season ago, a sign of the strength the league’s new additions have made to the league overall. With a bumper week of 23 games coming in the upcoming seven days, there will be plenty more to come in this vein as the league remains on course for another record year.

2. BACK WITH A BANG: If there was an underlying theme this weekend, it was that of players having big impacts against their former clubs. That was certainly the case for Saint Louis FC’s Joey Calistri, who put in his best performance for his new club against a Tulsa Roughnecks FC side he had starred for a season ago. With two goals and one assist, which included a highlight-reel showcase in terms of skill and finishing, Calistri made ONEOK Field his home again for one night, and boosted Saint Louis into the playoff places in the Western Conference. After helping the Roughnecks earn their first postseason berth a season ago, Saint Louis is hoping the former Chicago Fire Homegrown signing will accomplish the same feat in a second consecutive year as STLFC hunts its first trip to the USL Cup Playoffs.

3. CUBAN, SANDWICHED: Another player who came back to haunt his former side was Richmond Kickers forward Heviel Cordoves as the Cuban forward not only notched the game-winning goal in his side’s 2-0 victory against the Charleston Battery on Saturday night at City Stadium, but also put in a strong all-around display. Cordoves’ offseason move from Charleston to Richmond hasn’t paid off as handsomely as the Kickers had hoped for yet with Cordoves’ goal just his second of the season, but in taking a morale-boosting victory ahead of an important week that sees the side visit both Penn FC and then FC Cincinnati there’s some hope for the Kickers as they look to find a path back to the race for the playoffs.

4. LOSS IN A DRAW: It was somewhat understandable that Louisville City FC experienced a little bit of a letdown after its victory against the New England Revolution in the Lamar Hunt U.S. Open Cup, as even the spark provided off the bench by Brian Ownby couldn’t find a way to break the deadlock in a 0-0 draw with a spirited Bethlehem Steel FC. The biggest concern coming out of the game, however, was the status of Louisville forward Cameron Lancaster, who was taken to a local hospital after suffering a shoulder injury in the first half of the contest at Goodman Stadium. Lancaster has had a standout season so far for the defending USL Cup champion, and while the abilities that Luke Spencer and Ilija Ilic offer the side are certainly good, Louisville fans and neutrals who have enjoyed watching his strong performances this season will be hoping Lancaster isn’t sidelined for long.

5. RETURN OF THE KING: There was no such hangover for FC Cincinnati after its penalty shootout defeat to Minnesota United FC last Wednesday night – likely aided by the fact that its opponent on Saturday, North Carolina FC, had gone through a similar circumstance on the road against D.C. United – and Louisville’s draw allowed FCC to take a three-point lead at the top of the Eastern Conference as the reliable duo of Danni König and Jimmy McLaughlin found the net to complete a season sweep of the USL newcomers. In claiming his team-leading sixth goal of the season, the continued run of form that König is currently on is starting to bring back memories of his first season in the USL with OKC Energy FC, where his scoring prowess led the side to a second-place finish and a place in the Western Conference Final. Now the leading goal-scorer in FCC’s short history, the great Dane is thriving again.

6. BATTLE LINE DRAWN: In the long-term it’s likely that both the Tampa Bay Rowdies and Nashville SC will look back on their 1-1 draw at Al Lang Stadium on Saturday night with some satisfaction as the Rowdies’ maintained their undefeated home record and Nashville extended its current undefeated streak to 10 games in all competitions, but there’s a case to be made that both should have been disappointed not to have claimed all three points. Tampa Bay certainly could have found the net before Leon Taylor’s debut goal six minutes before the end leveled things, and but for a stellar display by NSC goalkeeper Matt Pickens in his return to face his former club would have. NSC, meanwhile, continued to show its defensive mettle after Lebo Moloto’s first-half goal had given the side a first-half lead, only to see an unlucky bounce cause its lead to evaporate. With both teams still in the middle of a scrap for position in the Eastern Conference a point was nice, but not necessarily the outcome either should be satisfied with.

7. SHOWDOWN STALEMATE: Saturday’s clash between Sacramento Republic FC and Phoenix Rising FC was set to be the contest that potentially determined which side would emerge as the primary challenger to Real Monarchs SLC at the top of the Western Conference. After a 0-0 draw that saw the sides combine for two shots on goal – both for the visitors – the Monarchs came out as the winner on the night without having to kick a ball. It certainly could have been a different outcome had Republic FC’s Jeremy Hall converted from the penalty spot late in the first half, his effort instead going over the crossbar, but after its victory in extra time on Wednesday night against Seattle Sounders FC in the Lamar Hunt U.S. Open Cup the hosts looked flat according to Head Coach Simon Elliott. Phoenix, meanwhile, ensured they were much more locked down defensively than in Sacramento’s victory when the sides had met previously this season, but Jason Johnson’s second-half effort that came back off the right post was the closest the visitors came to grabbing three points on the road, leaving both still in good position for a playoff berth, but falling further off the pace for the conference lead.

8. CHOPPING WOOD: Instead of either Sacramento or Phoenix, it’s now the Portland Timbers 2 who sit second to the Monarchs after a 1-0 victory against Rio Grande Valley FC that saw T2 become the first side to claim victory at H-E-B Park this season and also rebound impressively from its late collapse against San Antonio the previous week. Portland is now one win away from trebling its win total from its season ago and is also the league-leader with eight shutouts this season as one of the biggest turnarounds in league history continues. With the club finding success at all levels, Head Coach Cameron Knowles’ side has a big week ahead with home games against OKC Energy FC and Colorado Springs Switchbacks FC that could determine how big a challenger to the conference-leaders T2 are.

9. SMOOTHING A PATH: Despite their status as two-time defending Western Conference champion, it hasn’t always been smooth sailing for the Swope Park Rangers this season, and that’s understandable with a lineup that’s in a regular state of flux for Head Coach Paulo Nagamura. But as was once again shown in Saturday’s 1-0 victory on the road against Colorado Springs Switchbacks FC, when the side needs to pull out a result it generally finds a way to do so, a characteristic that has made the Rangers such a dangerous side in knockout games over the past two years. Saturday’s display was hardly vintage for the visitors, and goalkeeper Eric Dick probably owes his defense a dinner or two after some first-half adventurousness, but it got the job done and ensured Swope Park remained firmly in the playoff positions.

10. PLANNED TO PERFECTION: Most of the time as a home side the goal is to dictate the terms of a game with the ball at your feet. In its 2-0 victory against ATL UTD 2 on Saturday night at Lucas Oil Stadium, though, Indy Eleven turned that concept on its head as its smart gameplan allowed Atlanta the majority of possession in order to claim most of the game’s shots for itself. The Eleven ended up with a 16-7 advantage in shots overall – and 7-1 in shots on goal – as its pressure at various points of the field meant Atlanta rarely had a way through to test Indy goalkeeper Owain Fôn Williams. Needing a victory to break a four-game winless streak and boost its playoff positioning, Head Coach Martin Rennie played it perfectly to set his side up to succeed.

11. SECOND-HALF SURGE: If there’s been a hallmark to the success the New York Red Bulls II have produced in their three-plus seasons in the league, it’s been the strength the side has shown in the second halves of contests that has allowed the 2016 USL Cup champion to rack up 51 regular-season victories since the start of the 2015 season. The Red Bulls II’s ability to wear down opponents came to the fore as it reopened its home at MSU Soccer Park with a 4-2 victory against an in-form Charlotte Independence, with three second-half goals powering Head Coach John Wolyniec’s side to victory. New York faces a key stretch of games in its next four outings to close out the month, with three coming on the road, but if this season and history is any indicator all of those opponents – starting with Pittsburgh Riverhounds SC this Saturday – will want to have an advantage by the time the halftime break arrives.