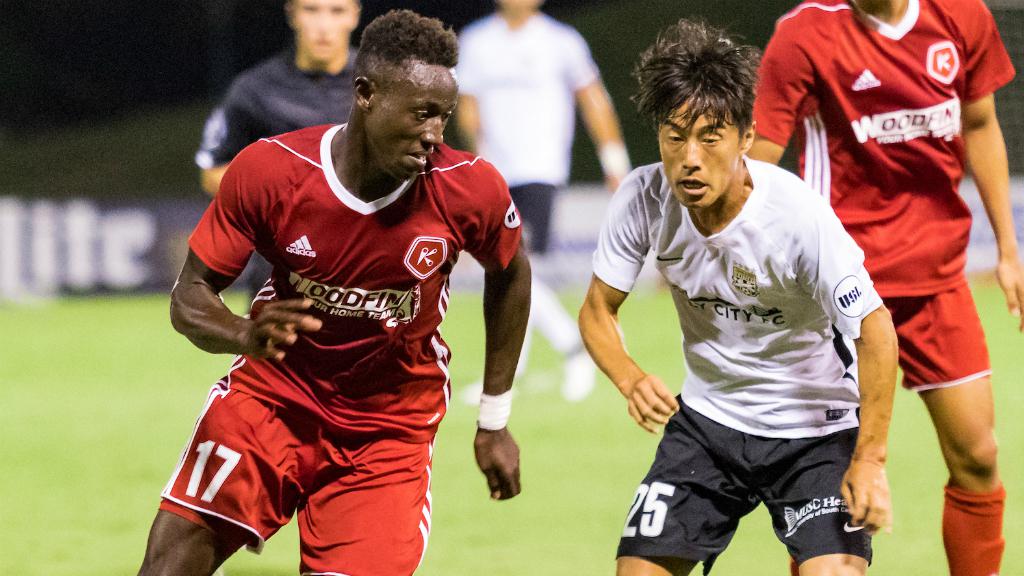 CHARLESTON, S.C. — On the back of a nine-game undefeated streak, the Charleston Battery head north to City Stadium to take on the Richmond Kickers on Saturday (7 p.m. ET | Match Center | ESPN+) in one of the USL’s most historic rivalries. The history between the two clubs, which dates back to their formation in 1993, makes this match different from the other matches in the run, with a tough battle always expected when these teams square off.

“It’s going to be a great matchup. When we play Richmond, it’s a big rivalry game. We’ve played each other so many times. Home or away, it’s always a battle,” said Battery Head Coach Mike Anhaeuser. “We know we have to go in there and defend well. They’re going to try to counterattack and open up. I think they’re going to try to press us a little bit more than they have been in their last few games, so we have to be ready. Obviously coming off of the [Lamar Hunt U.S.] Open Cup game, we’ll have a few changes. It’s going to be a great game, always is, so we’re excited to go up there.”

The rivalry between the two sides will lead to a strong crowd at City Stadium on Saturday night, creating an intimidating atmosphere. With Richmond in great need of a victory, Anhaeuser is expecting the Kickers to produce an effort that will help get their season back on track as they enter the contest in 14th place in the Eastern Conference, seven points out of the playoff positions.

The Battery claimed the regular-season series between the clubs a season ago taking two victories to Richmond's one, but after suffering a 3-1 defeat in their last visit to City Stadium and having former Charleston forward Heviel Cordoves awaiting the chance to face his former club while there's reason for confidence in the Battery locker room there's very little they're taking for granted.

“It gives you confidence, but it’s different every season,” said Anhaeuser. “You have different players. You know they brought in a lot of new players this season and mixed them in with some of their players that they kept. It’s a different team, but in a sense, it’s always the same because [Richmond Kickers Head Coach] Leigh [Cowlishaw] is there and I’m still here. He does a lot of the same things each year and he knows what we do. That’s what makes for a great rivalry. You know each other, so it comes down to the little things or maybe something special from one of the players. That’s what makes it so exciting. The rivalry is so close, so it’s pretty easy to get up for this game and prepare for it.

ROWDIES READY FOR NASHVILLE CHALLENGE: After a thrilling victory in the Lamar Hunt U.S. Open Cup on Wednesday night, Nashville SC will travel to Florida to take on the Tampa Bay Rowdies on Saturday (7:30 p.m. ET | Match Center | ESPN+) in what is one of the biggest games of the weekend. Nashville is clearly on a high following its 2-0 victory against the Colorado Rapids, which added to a nine-game undefeated streak in all competitions, and will bring big momentum to its match with the Rowdies.

“Nashville is coming off a very big win in the Open Cup so they’ll obviously have that momentum that these matches give you,” said Rowdies Head Coach Neill Collins. “On the flip side, they’re coming off a midweek match and travel, so that will be somewhere we might be able to find an edge on them. We need to make sure we do our things correctly and I think the rest will line up. We have excellent quality in our squad and it’ll be a great battle.”

The form of both teams makes this match an interesting encounter with Nashville's unbeaten run having pushed the side up to sixth place in the Eastern Conference, just four points off top spot. That streak will get put to the test by the Rowdies, however, with the club's undefeated run at Al Lang Stadium in the regular season stretching back more than a year as it sits at 3-0-2 at home this season. With a chance to pass Nashville in the congested conference standings, three points would be a big boost for the hosts.

“You have a team that is coming to Al Lang with a lengthy unbeaten streak, but you also have a team like ours, which holds an extensive unbeaten run at home,” said Collins. “We don’t take our home record for granted, as we continue to work hard to maintain that. We’ll be without two very important players [Joe Cole and Marcel Schäfer] due to suspensions, but we feel we have players who will step up to this opportunity and give it their all.”

The Nashville side has clearly clicked into place well at this stage of its inaugural season with a well-marshaled squad led by Head Coach Gary Smith and former Rowdies goalkeeper Matt Pickens. Having conceded only seven times in 11 games, tied for the fewest goals against in the league this season, NSC will prove difficult to break down if the Rowdies are to continue their impressive run, but Collins is clear on what will be needed for his side to take victory.

“They are a very organized side and we’re expecting it to be a great match at Al Lang Stadium,” said Collins. “With that being said, I have told our players that we need to focus on us and play to our strengths. We will benefit from playing at home in front of our amazing fans and we’re looking forward to trying to earn a result for them. They deserve it.”

The team’s regular home had been undergoing renovations and upgrades throughout the past few months that have brought the venue's capacity to 5,000, seen the playing surface undergo upgrades, and the addition of brand new locker rooms. With such big changes, the Red Bulls II are ready to get going in their enhanced home digs.

“We’re excited to be back and see what the final product is going to look like. It’s always nice for us to have our own home and a place that could be ours,” said Red Bulls II Head Coach John Wolyniec. “We’re just excited to see how it’s going to play and excited to get out there and get after it again.”

Having played its first six matches at Red Bull Arena – a world-class venue, but one that doesn’t have the feel of a permanent home – the Red Bulls II will now finally have a place that really is its own.

“It helps obviously with the environment. It’s just a good feel. It’s always good for a team to have a place that they call home,” said Wolyniec. “Obviously playing at Red Bull Arena is amazing, the guys enjoy it and all that, but at the same time it’s nice to have a place to call your home turf and defend it and go after games, go after three points in a good way.”

For a first home game back at a renovated home ground, the hosts will face a tough challenge against the Independence, who enter on a four-game winning run after their win against Ottawa Fury FC last Saturday night. After suffering a deflating 2-1 defeat to FC Cincinnati last week the Red Bulls II are aiming to bounce back strongly as they reopen their home, and Wolyniec is hoping to loss provided lessons his team capitalizes on against a fellow playoff contender.

“For us, I think it’s a little bit more about us and working on some things that we need to work on especially at this point in the season, and a little less about the opponent,” said Wolyniec. “Just making sure that we learn something. Hopefully, we learn something out of the Cincinnati game. A couple slip-ups in a game that maybe could have been a little bit more in our control and hopefully we can dial in on those things and come away with a victory this week.”