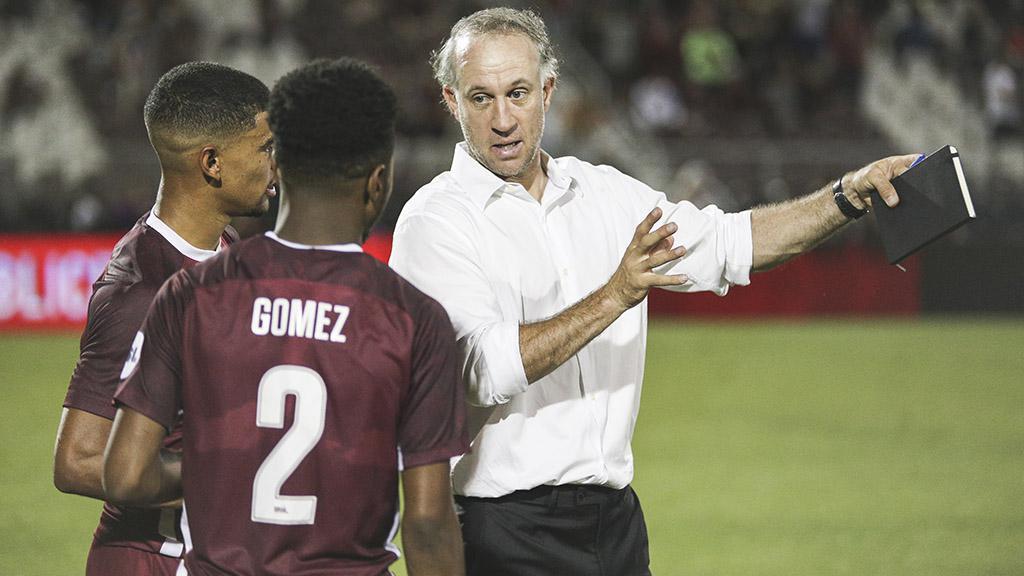 One of the keys to success to a high finish in any regular season is the ability to produce in the face of adversity and making sure one bad result doesn’t snowball into a longer slide down the mountain. After this weekend’s action across the USL, which maintained certain hierarchies within the standings, we’re continuing to be able to separate the wheat from the chaff in the current crop.

1. BOUNCEBACKABILITY: One of the major issues that faced Sacramento Republic FC a season ago was that the club often struggled to rebound after a disappointing result. That has been far from the case this year, however, with the club’s 1-0 victory against Orange County SC before a crowd of 11,569 fans on Saturday night the latest example of the club’s ability to bounce back into the win column following a defeat. After each of the club’s three losses this season, it has now followed with a victory, and while Head Coach Simon Elliott will be looking for more consistency from a side which is now 3-3-0 over its past six league games, the resilience Republic FC has shown to remain in the top three in the Western Conference has been an impressive trait.

2. OFF TARGET: On the other hand, Saturday night shaped up as an opportunity for Orange County SC to make a statement, but despite creating some good chances to go ahead before Sacramento took the lead just before the hour-mark the visitors were unable to take advantage as they remained without a win against the current top four in the Western Conference this season. Nansel Selbol’s chance early in the second half, breaking in from the right side alone only to miss the target, stood out as one of the key moments of the contest, and while Orange County is still firmly in the picture to reach the postseason taking advantage of those types of opportunities is going to be key if the side is going to challenge for a top-four place or a deep playoff run.

3. GRABBING THE LIFELINE: Things were not looking good for FC Cincinnati midway through the second half of its visit to the New York Red Bulls II on Saturday afternoon, already trailing by a goal and facing a penalty kick in a game the visitors needed something from to keep up the pressure on Eastern Conference-leader Louisville City FC. But after Brian White’s spot kick for the Red Bulls II flew over the crossbar to hand FCC a lifeline the visitors ensured it wouldn’t let its opportunity slip. A beautifully chipped finish by Emmanuel Ledesma that leveled the score only four minutes later followed by a sharp low finish by Danni König gave Cincinnati a 2-1 victory, its first on the road against New York in three seasons, but more importantly made sure that Louisville is going to have to take advantage of its games in hand to return to top spot in the conference standings as the two rivals go back-and-forth toward the midpoint of the season.

4. LUCK BOX: There’s a saying that it’s often better to be lucky than good, and while the Charlotte Independence put in a solid road display against Ottawa Fury FC the slice of good fortune they received as Yann Ekra’s deflected shot found the back of the net with seven minutes to go to give the side a 1-0 victory at TD Place was certainly the sort of break that can help carry a team forward. That Ekra’s shot was the lone effort on goal from the Independence in the game and broke Fury FC’s shutout streak at 636 minutes only added to the feeling that Charlotte had gotten a little bit lucky to claim its fourth consecutive victory. The Independence have been good far more than they’ve been lucky this season, they wouldn’t be sitting in fourth place in the Eastern Conference if that wasn’t the case, but some good fortune at the right moment never goes amiss.

5. NECO’S CASE: After back-to-back disappointing performances that had seen his side fail to put away its principal rival and see its undefeated start to the season, Pittsburgh Riverhounds SC Head Coach Bob Lilley was looking for a reaction from his side as it visited the Richmond Kickers on Saturday night. Thanks to Neco Brett’s second-half goal and assist, the Hounds earned only their second away win against the Kickers in the USL’s modern era to remain in contention near the top of the Eastern Conference standings. Brett has been one of the breakout performers in the USL this season after two seasons in Portland where the Jamaican never quite found his groove, and with six goals this season he’s becoming the consistent attacking threat the Hounds needed to replace the departed Corey Hertzog this season.

6. SHIFTING THROUGH GEARS: With nine teams having done so over the past three seasons, reaching the USL Cup Playoffs in an inaugural season isn’t a rare feat, but with the way Nashville SC is playing currently it looks set to join that company after another impressive home victory at First Tennessee Park on Saturday night before a sellout crowd of 8,724. Given the squad the side put together this offseason, it shouldn’t be that big a surprise Nashville is a contender, but the recent addition of Brandon Allen appears to have helped the side find a new gear. With goals in back-to-back games and a nifty assist on Lebo Moloto’s outstanding finish this Saturday night in a 3-1 win against Penn FC, it looks like the Boys in Gold are only getting warmed up for a run at the top four in the Eastern Conference, with Saturday’s game at Tampa Bay one of the most intriguing of this week’s league slate.

7. ROLLING THE DICE: There’s been no shyness in Las Vegas Lights FC’s desire to also be a playoff contender in its inaugural season, but the club’s recent winless streak put a dent in those aspirations as the side slide down the Western Conference standings after a hot start to the season. With the addition of former LA Galaxy midfielder Raul Mendiola and Seattle Sounders FC midfielder Zach Mathers, though, Lights FC made the sort of aggressive moves that could definitely pay off in the long-term for the club. Both Mendiola and Mathers made immediate impacts for Las Vegas this Saturday as well, each contributing an assist in a 4-1 victory that saw Freddy Adu mark his 29th birthday with his first goal for the club and goalkeeper Ricardo Ferrino embark on one of the more adventurous runs you’ll see his season. There’s still a way to go, but things might be about to get hot in the entertainment capital of the world.

8. STEP FORWARD, STEP BACK: While Saturday night helped revive Las Vegas’ playoff hopes, it put another dent in the chances that Colorado Springs Switchbacks FC will make a return to the postseason as it continued to alternate wins and losses over its past four outings. Conceding four goals for the first time since a 4-3 defeat against OKC on July 22, 2017, the Switchbacks again left themselves in a precarious position when it comes to a top-eight place, especially considering the victories for San Antonio FC and Saint Louis FC that pulled both teams even on points with Head Coach Steve Trittschuh’s side. There have certainly been moments this season when the quality Colorado Springs can put together has been on display, but as with a season ago if the Switchbacks can’t start stringing consecutive performances together it’s going to end up in disappointment in the Rockies.

9. RENO GOT MO’: The power of momentum can be seen clearly in the run that Reno 1868 FC has put together since picking up its first win of the season, with a 2-1 victory on the road against OKC Energy FC extending 1868 FC’s club-record undefeated streak to nine games as it moved even more comfortably in the Western Conference playoff positions. The confidence the side has shown in recent outings manifested itself perfectly in its game-winning goal at Taft Stadium as Brent Richards’ perfect piece of skill to beat his marker and set up Lindo Mfeka for a precise first-time finish left Energy FC’s defense cut open. The next challenge for Reno will be to bridge the gap to the top four, but it’s one the side will be eager to embrace as it returns home to face Fresno FC next Saturday night.

10. RALLYING POINT: Things haven’t gone nearly as smoothly for San Antonio FC this season as they did a year ago, but with the side fighting for a place in the top eight in the Western Conference it certainly felt like the late 2-1 comeback victory against the Portland Timbers 2 could provide a major turning point in a season that has seen the club struggle at times to find the net. Omar Gordon provided the primary impetus for the victory for the hosts, which also saw Portland slip back into old habits as it failed to protect its lead late on, as the Jamaican worked tirelessly to pull his side back into the contest and was rewarded with the equalizer with four minutes to go, and when Alex Bruce recorded the game-winner in the third minute of stoppage time to bring the roof off Toyota Field it felt like a page had been turned in SAFC’s season.

11. COMEBACK KIDS: San Antonio’s comeback victory was impressive, but it might have been topped by the escape act Bethlehem Steel FC pulled off in a 2-1 victory against North Carolina FC on Saturday night that sent Head Coach Brendan Burke’s side back into the top eight in the Eastern Conference while handing NCFC a devastating blow as it remains well off the pace in the standings. Bethlehem may have been outshot comfortably by its hosts, but what it lacked in volume Steel FC made up for in efficiency with Santi Moar’s second assist of the night placed perfectly between the goalkeeper and last defender to set up Michee Ngalina’s close-range finish the sort of slide-rule pass that looks far simpler than it is. Bethlehem faces a test at home this Saturday as defending champion Louisville City FC visits, but given recent displays seems more than up for the challenges that are going to come its way as it bids for a second consecutive playoff berth.