11 Things – Home Away from Home 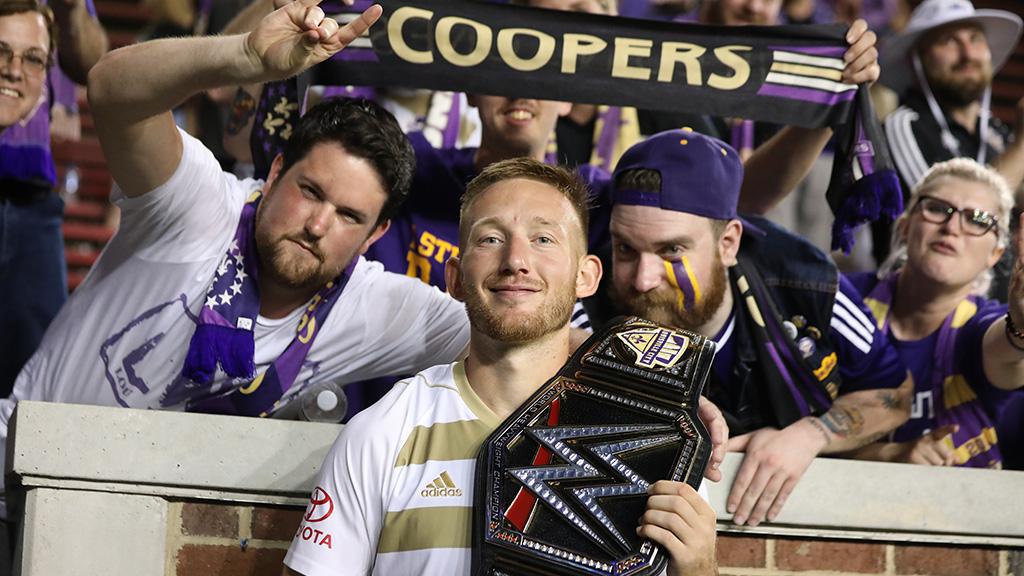 Given the stakes at hand, Louisville’s victory against Cincinnati was the banner headline in the USL this past weekend, but away from the clash at Nippert Stadium there was also some other key movement within both conferences. Here’s a look back at what might have been an understated weekend for some in the league, but one that could have a lasting impact further down the line for a number of clubs.

1. LEADER OF THE PACK: Going strictly by the numbers, Saturday’s 2-0 victory for Louisville City FC against FC Cincinnati in front of a crowd of 26,495 fans at Nippert Stadium wasn’t the most dominant display the defending USL Cup champion has put in this season. In terms of the most impressive, however, it’s hard to find a better display than the one which saw Louisville regain top spot in the Eastern Conference, and once again make Nippert Stadium somewhat of a home away from home. City FC is now 3-1-1 all-time on the road in league play against its River Cities Cup rival, and with a game in hand on its two closest competitors has a chance to open a solid margin at the top as it reaches one-third of the way through the regular season.

2. NO WORK, NO PLAY: FC Cincinnati has been able to overcome poor first-half displays in some games this season, but even after the glimmer of hope that came after Emmanuel Ledesma’s free kick rang the post 10 minutes into the second half any momentum that could have been gained was quickly snuffed out by Louisville’s sharp midfield play. FCC allowed its visitors to control the terms and positions the game would be played in throughout the game – Louisville recorded 203 passes alone in Cincinnati’s half, its third-highest total of the season and almost 50 more than its hosts – while Cincinnati only recorded 14 touches in the Louisville penalty area, tied for its fewest in a game this season. “I’ve played for many years and seen much better effort in 90 percent of those matches,” said FCC center back Dekel Keinan. “I think as a team we didn’t work hard for each other.” It’s hard to argue with that sentiment.

3. FROM THE TREE TOPS: The transformation from last-placed side a season ago to current Western Conference contender by the Portland Timbers 2 continued on Saturday with the club’s biggest victory of the season, a 1-0 win against conference-leaders Real Monarchs SLC that could have been more emphatic if not for T2’s inability to convert from the penalty spot. As it was, a late game-winner by Dairon Asprilla handed Portland its fourth win in the last five games and a jump into second place in the standings after another impressive display. Portland’s speed jumped off the screen against a solid defensive side in the Monarchs, with Marvin Loria and Asprilla regularly causing their visitors problems. After the spiral down that was caused by narrow defeats last season, Portland might be among the most confident sides in the league right now as it looks for a first trip to the postseason.

4. CROWN DISPLACED: Coming in on a four-game winning streak of its own, the display in Portland by contrast from Real Monarchs SLC was a strangely sluggish one as the side never seemed to quite come to grips with the challenge facing it until it went behind with 13 minutes to go. Aside from some outstanding goalkeeping from Jake Leeker, who saved a penalty kick in the first half and made other key stops besides, the Monarchs never seemed to properly get going, recording only two blocked shots in the second half prior to Portland taking the lead. That provoked a response as Real recorded the final six shots of the contest looking for an equalizer, but it wouldn’t really have been deserved after a flat display overall.

5. BACK WITHIN RANGE: There are probably still questions hanging over the two-time defending Western Conference champion Swope Park Rangers after the up-and-down nature of some of their recent performances, but in taking their first win in regulation against Phoenix Rising FC on Saturday afternoon the club definitely solidified its place in the playoff positions after having taken only one win in its previous six outings. Hadji Barry’s goal might have been slightly fortuitous as Phoenix goalkeeper Zac Lubin’s fumble let the forward in for a composed finish, but in the end it felt like the hosts had earned all three points as Adrian Zendejas made a pair of clutch saves to earn his second shutout of the season. The road doesn’t get easier from here for SPR, which will visit two sides in Saint Louis FC and Colorado Springs Switchbacks FC looking to gain ground on it in the Western Conference, but with their ability to control tempo and the flow of games the Rangers shouldn’t enter either contest with great trepidation.

6. HITTING THE SKIDS: It was only two weeks ago, but after back-to-back defeats to fellow playoff contenders, Phoenix Rising FC’s successful trip to Oklahoma is feeling like it was a lot longer ago, and now not even looking like it was all that impressive a feat with OKC Energy FC and Tulsa Roughnecks FC propping up the Western Conference standings after their Black Gold Derby draw on Saturday. Phoenix was able to pull something out of the bag to claim points in three consecutive games from a trailing position not long ago, even against Swope Park in the first meeting between the clubs this season, but the emphasis for the side from hereon has to be getting the first goal and avoiding the uphill battles that have caused it angst of late.

7. SILVER STATE SURGE: The goal-scoring numbers might not quite match up, but there’s a striking similarity to the way Reno 1868 FC has pulled itself into the playoff positions in the Western Conference over the six weeks. Saturday’s 2-1 victory against San Antonio FC keyed by Mo Thiaw's goal and assist ran 1868 FC’s undefeated streak to eight games (4-0-4), which is now the longest in club history as it surpassed two seven-game undefeated runs a season ago. In contrast to the first of those streaks – during which Reno scored 24 goals over seven games in going 5-0-2 – this year it’s the club’s defense that is getting things done having conceded only six goals in its past eight games. With Brent Richards leading the group statistically, sitting in the top five in the league in interceptions with 37 and in the top 15 in the league in possession recoveries with 81, Reno is putting itself in position nicely to maintain its momentum.

8. JACK'S ON THE MOVE: There might have been cause for concern as to the direction the Charlotte Independence’s season was moving when the side was not only held without a win in five consecutive games, but also without a goal in four after a loss to the Charleston Battery on May 5, but after another resounding result against the Richmond Kickers this past Saturday the ship appears to have been righted with the side having scored nine goals in three consecutive victories. In claiming the club’s first road win of the season, the Independence got sparking displays from veterans Cordell Cato and Yann Ekra, who combined to produce all three goals in the 3-1 victory, and now the top four in the Eastern Conference is well within view for Head Coach Mike Jeffries’ side.

9. PRESSURE DROP: After recording its fewest shots in a game this season in its prior contest – only nine in a 3-0 defeat to Bethlehem Steel FC on May 16 – and entering without a win in its previous five games overall, it felt as though the New York Red Bulls II were due for the sort of attacking performance that had made a statement earlier in the season on its home turf. In putting up 30 shots – tied for the second-highest by any clubs in a game this season and trailing only its opening day display against Toronto – New York ended up overwhelming an Indy Eleven side that not only was undefeated on the road prior to Sunday afternoon but had also yet to concede a goal, with New York’s 4-1 victory putting the side firmly back into the Eastern Conference playoff positions. With both FC Cincinnati and the Charlotte Independence coming to Red Bull Arena in the next two weeks, there’s a big moment here for the Red Bulls II to make a run toward the top of the Eastern standings.

10. ROCKY MOUNTAIN HIGH: Saturday night’s game against Saint Louis FC was by no means a must-win for Colorado Springs Switchbacks FC but given the fact that Head Coach Steve Trittschuh’s side has played the most games so far in the Western Conference and found itself in the middle of a scrap for a place in the top eight, the 3-0 victory the side emerged with was definitely a very useful one. The biggest thing for the Switchbacks now, though, is to make sure it gets on a roll as it visits Las Vegas Lights FC this weekend. Inconsistency was the biggest reason the Switchbacks missed out on the playoffs a season ago and with the side still sitting with more losses than wins 13 games into 2018 there’s the danger it could be their downfall again.

11. CLOSING THE DOOR: After its six-game winless streak to start the season it became clear it was going to take time for all the moving parts to shake out for Ottawa Fury FC this season. Now, with the side having won three of its last four outings and recorded shutouts in every game of a five-game undefeated streak after Friday night’s victory against Bethlehem Steel FC, the playoff positions are within sight for Head Coach Nikola Popovic’s side. It took a goal just 41 seconds into the game at TD Place by Kevin Oliveira to earn Fury FC its 1-0 win against Steel FC, the fastest league goal in the club’s professional history and second-fastest in all competitions, and even though Carl Haworth was twice denied adding to the lead by the woodwork it was rare that it felt like Steel FC had a chance at a response. Fury FC defender Nana Attakora’s last-gasp clearance to keep out Santi Moar was maybe the biggest moment of the match, evidence of the work-rate that now prevalent in Ottawa as it has gone from one of the softest touches in the league defensively at the start of the season to one of the toughest nuts to crack presently.