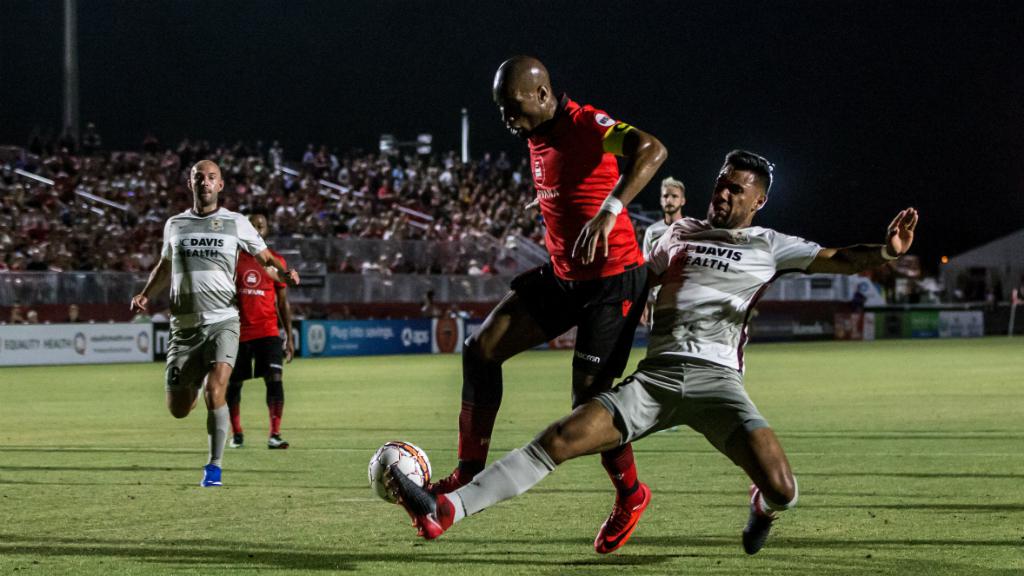 PHOENIX – A strong first-half performance proved enough for Sacramento Republic FC as it took a 3-1 win over Phoenix Rising FC before a sellout crowd of 6,503 fans at the Phoenix Rising Soccer Complex on Saturday night. After the hosts had done well in the opening stages it was Sacramento who scored the opening goal as Cameron Iwasa was able to beat Phoenix midfielder James Musa to the ball from Carlos Rodriguez and poke it past the goalkeeper. As Phoenix pushed forward looking for an equalizer Republic FC stole possession and executed a perfect counterattack to double its lead. The ball was spread wide for Jure Matjasic, who held the ball just long enough to draw the defense, allowing him to then cut the ball back for Villyan Bijev, who was able to side-foot the ball into the back of the net. In his 500th professional league appearance Didier Drogba had a golden opportunity to pull his side back into the match with a penalty kick but his effort was too central, allowing former Rising FC teammate Josh Cohen to make the save. Phoenix had the ball in the back of the net following the scrum after the penalty save but the goal was canceled out for a foul on Cohen, keeping Sacramento ahead by two goals at halftime. Phoenix appeared determined to come back in the second half, and went to the bench early bringing on forward Chris Cortez. That would prove to be a shrewd move from Rising FC Head Coach Patrice Carteron as Cortez pulled a goal back in the 62nd minute when he put away a perfect cut-back from Solomon Asante. The second half was all Phoenix as the hosts continually peppered Cohen’s goal with shots but the Republic FC defense held on. With a goal deficit the hosts threw numbers forward and in the 88th minute Sacramento took advantage to wrap up the win with swift counter attack, as Bijev quickly released Wilson Kneeshaw, who ran through one-on-one with the keeper placing it perfectly out of his reach to seal the win.

Josh Cohen, Sacramento Republic FC – Phoenix continually peppered the Sacramento goal with chances but Cohen was up to the task, saving a Didier Drogba penalty as part of a seven-save performance.