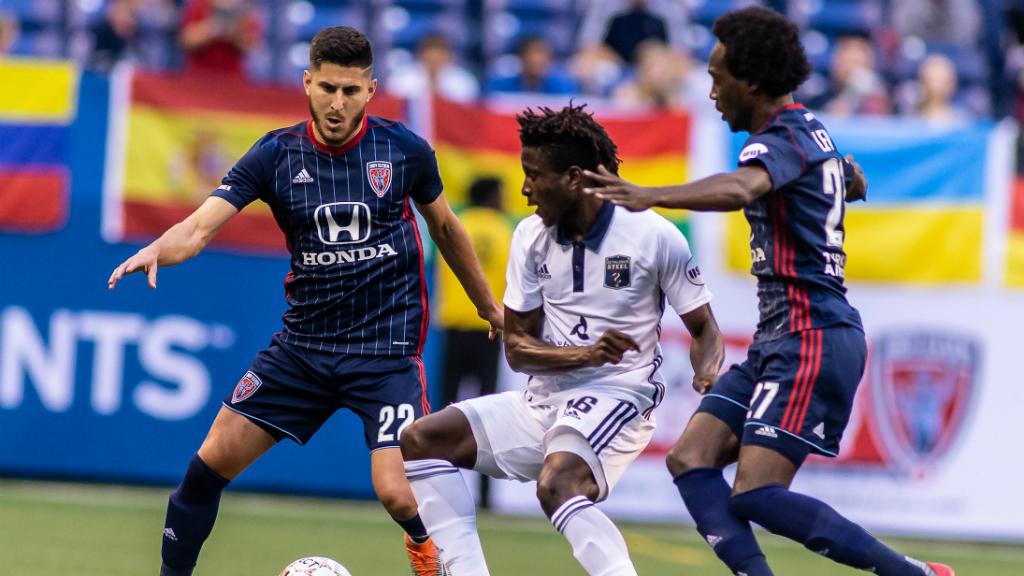 INDIANAPOLIS – The Bethlehem Steel FC offense continued its good form managing a stunning 2-1 victory over Indy Eleven at Lucas Oil Stadium on Saturday night. The hosts looked to control the match early and quickly established a dominant possession lead in the opening stages. With Indy pushing forward in the first half Bethlehem looked to take advantage with chances coming on the counter but struggled to find the target, too often letting the hosts off the hook. In an entertaining struggle for dominance through the first half both teams defenses stood firm to keep it scoreless at the break. The second half saw things become more open, and that was exactly what Bethlehem was waiting for, after prodding at the Indy defense the visitors opened the scoring in the 60th minute. A long throw from Olivier Mbaizo caught out the Eleven defense allowing Fabian Herbers to set it up for Santi Moar, sending it home with a half-volley that ricocheted in off the right post to open the scoring. That got the crowd, and the home players, fired up and just ten minutes later some patient build up opened up the space for Soony Saad to square it back to Zach Steinberger to hit the ball off the pitch, over the keeper, and level the scores. But Bethlehem had the perfect response, restoring its lead just four minutes after giving it up when a half-cleared corner fell to Prosper Chiluya, returning it with interest scoring with a 30 yard thunderbolt, bouncing over the keeper to score his first professional goal and seal the win for the visitors.

USLSoccer.com Man of the Match:
Prosper Chiluya, Bethlehem Steel FC – Scoring the winner was only part of what was a crucial performance from Prosper Chiluya, who had a good all-round game, coming up from the back for the goal and making six interceptions to stop Indy’s intricate build up.