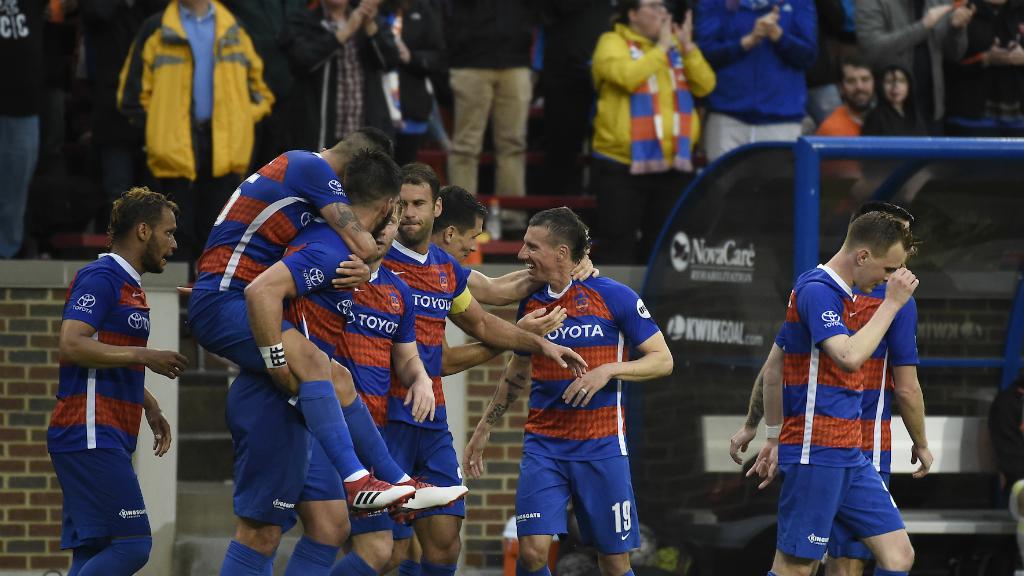 CINCINNATI – On top of the USL Eastern Conference is not enough for FC Cincinnati, following a loss against the Charlotte Independence last week FCC is looking for more when it takes on a North Carolina FC side (7:30 p.m. ET Saturday | Match Center) that is slowly building in form, in the middle of a three-match unbeaten run.

“The result and the performance at Charlotte were not very good but it’s part of the reality of being in this business is that you’re going to have results where things just don’t go your way and players don’t feel comfortable in the environment,” said Cincinnati Head Coach Alan Koch. “We’ve put that behind us very quickly, we’ve had a good start to the season and we’re excited to play some league games at home and hopefully we’ll have some cup games in between, so that will be a challenge to juggle the squad. We’re excited to play some matches in front of our fans."

North Carolina FC comes into the match having not played since April 28th, giving the side plenty of time to work on things ahead of this match.

“The two-week break was not ideal,” said NCFC Head Coach Colin Clarke. “We worked on all aspects of the game. We’re still young in the season and we feel we’ve got improvements to make in all areas. We’ll continue to make them throughout the year.”

Unlike North Carolina, FCC is coming into the match off a loss, a frustrating 4-1 loss to the Independence on the road last Saturday. But following on from that loss, NCFC has just quickly put it behind them and is ready for the next match.

“We were not so good on the ball in my opinion and we need to not concede four goals again,” said Cincinnati forward Danni Konig. “It was frustrating but you have to always look forward. You can’t win every game so the next game we’ll be giving 100 percent and get a win.”

This will be the first meeting between the two sides, and with Cincinnati on top of the conference, it will be a big test for a North Carolina side looking to continue its recent form.

“Obviously, we haven’t been there before,” said Clarke. “They’ve got a very deep roster which was very expensively assembled. They’ve got big crowds with a big field and different environment. We’re looking forward to testing ourselves on it.”

BUSY WEEKS TO TEST PITTSBURGH:  Now with the league’s only undefeated record, Pittsburgh Riverhounds SC travel to Florida to take on a Tampa Bay Rowdies team desperate to get back in form on Saturday (7:30 p.m. ET | Match Center). Despite the Rowdies poor run of late, with three straight league losses, Tampa Bay is a different team at home, having won every match at Al Lang Stadium, meaning that Riverhounds SC Head Coach Bob Lilley is determined to not take things lightly.

“They control possession a lot of times, so I think that's one of the challenges. We're not going to have as much of the ball as we have had,” said Lilley. We're going to have to be able to find outlets and get players into the attack.”

With a US Open Cup win on Wednesday, The Hounds will face a busier schedule, having to now take on FC Cincinnati on Wednesday and that has created different preparation for Saturday’s match.

"We have now definitively five games - potentially six if we get through the Open Cup game next Wednesday against Cincinnati - so we'll have those five games or six on short rest, short preparation,” said Lilley. “We are doing different things with massages, with cryotherapy, anything we can do to regenerate quickly. We're going to be rotating a lot of players."

Pittsburgh has proved it has a strong team, you have to in order to be undefeated at this stage of the season, with that strong squad sure to have its team spirit tested in this run.

"It's our job, the guys that are healthy, to go out, put in solid performances, work hard together, and we're going to have to be very collective. There's no easy way to go through a stretch like this,” said Lilley.

OTTAWA GROWING IN CONFIDENCE: After a difficult start to the season, things have started coming together for Ottawa Fury FC, now on a three-match unbeaten run Fury FC comes into an important match on Saturday against Charleston Battery (7 p.m. ET | Match Center) with confidence starting to flow for the players.

“The mood has definitely improved. To be honest, the boys didn’t get too down on themselves because we knew it was going to be difficult, that it would take some time,” said defender, and former Battery player, Colin Falvey. “We obviously would’ve wanted to pull some points back from the road trips early in the season, but we stuck to the game plan and now it’s nice that we’re actually picking up the points.”

Having had big changes in the offseason, including a new Head Coach in Nikola Popovic, things were always going to take time to come together, but the players have felt settled in the style of play, as demonstrated by the results starting to flow.

“It was only a matter of time. We believed in the system, we believed in the players that Nikola [Popovic] and [Julian] de Guzman brought in. We believed in the style of play. So we knew that it was going to come together and that it was just a matter of time,” said Fury FC forward Carl Haworth. “It’s difficult when you keep asking the fans and the team to stay patient because we knew that the final product was going to be there. But luckily enough it’s come together in the last couple of games and we hope to keep that going into the weekend.”

But confidence is not enough, the team has to execute the plan against an in-form Battery side on Saturday. With two teams in form, Saturday’s match sets up an interesting battle to get a big Saturday of action started.

“They’re a good team and an experienced one. And they’re in a good run of form. We have to respect that but at the same time, we can be confident in ourselves. We’re in a good run of form as well. We’re difficult to break down at the moment and we’re creating chances on the offensive side as well. The whole team is working for one another. We have to respect them and be a little wary of them on the counterattack because they have a lot of quality there as well. But we have to be confident in our abilities as well.”