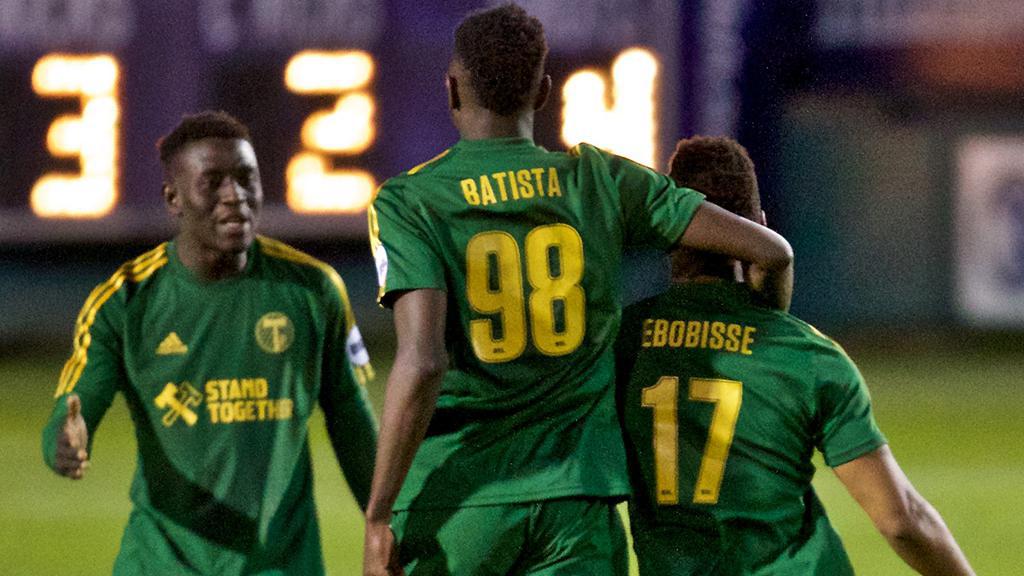 PORTLAND, Ore. – The turnaround that has placed the Portland Timbers 2 in fifth place in the USL’s Western Conference standings going into Friday’s game with the LA Galaxy II at Providence Park (2 p.m. ET | Match Center | ESPN+) has been one of the more remarkable in the league’s modern era.

But while the fact that T2 has already surpassed its wins and points total from a season ago with five victories and 17 points from its opening 10 games of the regular season is impressive, it’s the side’s defensive prowess that has been at the heart of its success. Tied for the USL-lead with Pittsburgh Riverhounds SC on six shutouts, and having conceded 10 goals in its 10 outings, it’s a far cry from 2017 when the side averaged conceding almost two goals per game and registered only four clean sheets as bad breaks seemed to regularly befall the inexperienced lineup.

Now, T2 is creating its own luck with the sort of collective work-rate that the best defenses in the USL have been known for in recent years.

“It’s from the front working back and it takes everyone’s effort and covering for each other for making plays for us to earn that shutout,” said T2 Head Coach Cameron Knowles. “That’s a real positive for the entire team and not for just the ‘defenders’ of the group”

Portland’s sixth shutout of the season arrived last Saturday, and helped the side claim a 1-0 victory against archrival Seattle Sounders FC 2 on a late goal by former U.S. U20 international Eryk Williamson, who was selected by the Timbers in the 2018 MLS SuperDraft. The former University of Maryland standout has been one of the key new additions to the side, leading T2 with 13 key passes while sitting second on the team with 17 interceptions and 63 duels won at a success rate of 67.7 percent.

Add in steps forward in production from Victor Arboleda and Jeremy Ebobisse in attack and Portland has a far more well-rounded side, the sort of which just missed out on a place in the USL Cup Playoffs two seasons ago. The confidence that has arrived after the work T2 has put in to rise from the conference’s basement a season ago was clear against S2.

“It’s the belief that the players have in knowing that if they keep fighting for the entire 90 plus minutes, they’ll have a chance to win the game,” said Knowles. “They did a really good job of keeping another clean sheet to give themselves a chance to win the game. I think the bravery and the desire that we saw in that last play sealed the three points. I think Victor [Arboleda] getting his head on there and then putting the cross into the box for Eryk [Williamson] – he made a really good good run into the box. There were some really big moments from those guys.”

Portland’s defensive record could get a solid test on Friday with Los Dos coming to town. The teams played a shootout at Providence Park a season ago that saw the Galaxy II come away with a 4-3 victory despite T2 scoring the first two goals of the game, and LA is coming off its best attacking display of 2018 in a 6-3 victory against Saint Louis FC last Wednesday that saw both Efrain Alvarez become the youngest scorer of a hat trick in the USL’s history, and Alvarez and Ethan Zubak become the first teammates to each score a hat trick in a USL contest.

“We knew it was coming,” said Los Dos Head Coach Mike Muñoz. “It was only a matter of time. The guys are hungry for more. … The guys are full of confidence. We’ve scored 10 goals in three games now. We were always waiting for that floodgate to open and now we just have to build off that momentum.”

With the chance to move into the top three in the West with a win before the rest of this weekend’s action kicks off, though, T2 is primed to pick up its third home win of the season and add to its stellar defensive work.