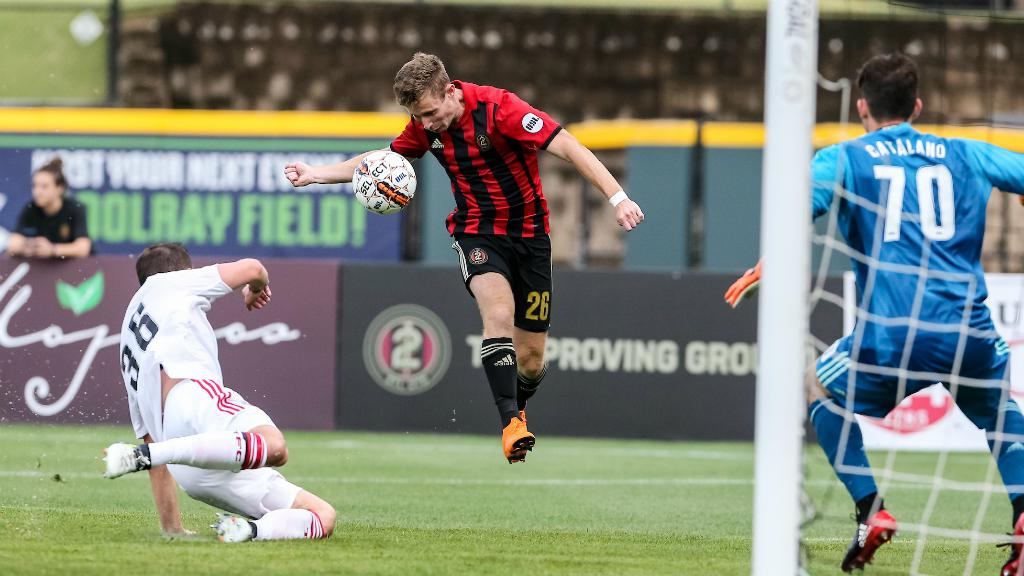 GWINNETT, Ga. – Fans were treated to a nine-goal thriller at Coolray Field on Wednesday night as ATL UTD 2 claimed a 5-4 win against Toronto FC II. It took only five minutes for Atlanta to open the scoring as Mikey Ambrose stepped up and hit a free kick curling it to the near post out of the reach of the goalkeeper. Toronto equalized thanks to a perfectly played cross from Aidan Daniels, finding former USMNT U17 forward Ayo Akinola who was able to bundle it home from close range, scoring his first goal for the club since 2016. The goals continued in the 27th minute with a stunning volley from ATL UTD 2 forward Romario Williams, who finished a strong passage of possession and passing from the hosts. Ambrose repeated his free kick exploits in the 40th minute from a similar position to his first as he lifted it over the wall into the back of the net. A push allowed Daniels an opportunity to step up to the penalty spot just four minutes later as the Toronto captain put it down the middle to pull a goal back in the late stages of the first half, and TFCII leveled  three minutes into the second half as Akinola cut the ball square for Luca Uccello, who was able to pass the ball into the back of the net. But that equalizer only lasted two minutes as the hosts got back in front when Williams managed a perfect ball for Jon Gallagher, who chested the ball down and then hit a half-volley across the face of goal into the right corner for Atlanta’s fourth. Toronto leveled again as a through-ball by Akinola released Uccello again, and after seeing his initial shot saved the rebound fell favorably, allowing the former Canada U20 international to slot home from a tight angle. But the slightest of touches from ATL UTD 2 midfielder Brandon Vazquez was able to redirect Jose Carranza’s shot just far enough to beat the goalkeeper and restore the lead for the hosts with 10 minutes to go for what proved to be the winner as the sides equaled the highest-scoring game in the USL this season.

Mikey Ambrose, ATL UTD 2 – Scoring two stunning free kicks was only the beginning of a strong performance from Ambrose, who also managed to create one chance for his teammates and finished with a passing accuracy rate of 87.5 percent.