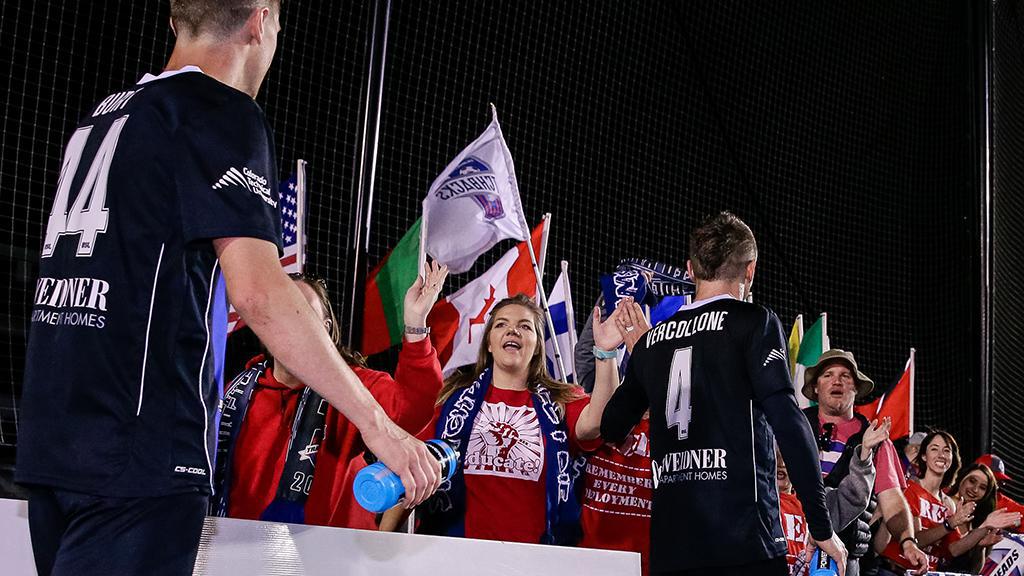 COLORADO SPRINGS, Colo. — Colorado Springs Switchbacks FC knew it was facing as close to a must-win as a contest in the first half of the season gets on Friday night when it hosted Las Vegas Lights FC at Weidner Field on Friday night. A 1-0 victory that both snapped a four-game winless streak for the side and pushed it into the top eight in the Western Conference certainly relieved some of the pressure the side had been feeling to get a result.

“Overall we needed the three points. We kept the tempo of the game up and may have been too fast,” said Colorado Springs Head Coach Steve Trittschuh. “But, to get the three points tonight was huge. We’re still creating a lot of chances and defensively we were strong again, not allowing a shot on goal. We just need to keep building on this and take the momentum going into our next match.”

For much of the match it looked like it would be a frustrating night for the Switchbacks as the hosts held the bulk of possession without finding a breakthrough. When Luke Vercollone produced what proved to be the winner in the 70th minute, however, the hosts never looked back in what had been a helter skelter contest.

“It was crazy, madness! It was fun, a lot of intensity which created a lot of opportunities for us,” said Vercollone. “I thought we controlled and dominated the match, but we finally scored, I’m very happy with the result.”

The time it took the Switchbacks to get that opening goal reflected how well Las Vegas had executed its game plan to leave the hosts frustrated. In what proved a physical, and at times tetchy game, Colorado Springs was pleased with the way it came through when it mattered most.

"I thought they came in and did what they wanted to do, as far as making it chippy and trying to score on the long ball. But, I thought we did well to manage the game and our emotions,” said Switchbacks midfielder Jordan Schweitzer. “We knew coming into the game that everything was on us, we’ve been doing everything well but the goal just wasn’t coming. Today it’s a big goal from Luke and a great finish."

SACRAMENTO LOOKING FOR PROFICIENCY: With a two-goal lead at halftime, things were looking good for Sacramento Republic FC against Reno 1868 FC on Saturday night. But from there, things went horribly wrong in the second half as Sacramento suffered a demoralizing defeat to its Donner Pass Derby rival.

“Games don’t last for 45 minutes. They last for 90, or 92, or 94 or 98. I think we came in and stopped playing the second half and got punished and deservedly so,” said Republic FC Head Coach Simon Elliott.

What left Elliott frustrated was his side’s lack of finishing, especially in the second half as Republic FC found the target only once while looking for a response to Reno's flurry of goals around the hour-mark. Republic FC finished with four shots on target overall out of its 16 shots total as it suffered its second defeat of the season and lost ground on both Real Monarchs SLC and Phoenix Rising FC, both winners on Saturday night.

“We’re very disappointed with the result. Not so much that, but with the performance. When you’re two-nothing up, we need to more clinical and more proficient,” said Elliott.

That tale of two halves was where all the focus was after the match, as the players also reflected on what was a difficult loss.

“The first half was really good. I thought we played the best soccer of this season so far,” said Sacramento midfielder Jaime Villarreal. “[In the] Second half, we came out a little bit confident, a little bit too comfortable and we let our guard down. We tried to fight towards the end, but it wasn’t enough.”

RGV HAPPY WITH POINT: With both Rio Grande Valley FC and San Antonio FC sitting outside the playoff positions going into the first South Texas Derby of the season, a draw wasn't the result either side was aiming for. But despite what could have been frustrating, the Toros were happy with their overall performance at to claim a point from their in-state rival.

“[I’m] extremely happy. I liked how we moved the ball around and how we controlled the majority of the play,” said Toros Head Coach Gerson Echeverry. “It’s one of the few games in which we out-possessed the other team, so for us, that’s key to make sure our team starts evolving in that aspect. I’m happy defensively. Getting a shutout is important. I don’t really recall too many clear shots.”

Now unbeaten in its last four matches, RGVFC has started showing signs of improvement with three clean sheets in that run.

“Yeah, it’s I think just tactically we’re moving so much better. Our communication overall is fantastic,” said Echeverry. “Our midfielders are doing such a great job of plugging those holes. Just the easy passes are not going at the rate that they were early on. And so it’s clear. The other one is [Goalkeeper] Nico [Corti]. Nico [Corti] has been doing very, very well. He’s maturing and coming into his own.”

Now with a strong base to build on, the Toros just need to get their attack into gear. Sitting six points out of the playoff positions as Week 10 kicks off, that needs to happen quickly, but the Toros are hopeful they can make a run at reaching the postseason for the second time in three seasons.

That was reflected by the players after the match, eager to change into a team which has a higher output after scoring just 12 goals so far this season.

“I thought the build-up was good maybe be more clinical. We have to be more deadly with them,” said midfielder Nicolas Perea. “We shared the ball well. Good clean opportunities, the 'keeper just made good saves and we couldn't find the back of the net.”