One historic comeback, another Drogba special, and the race in the East tightens 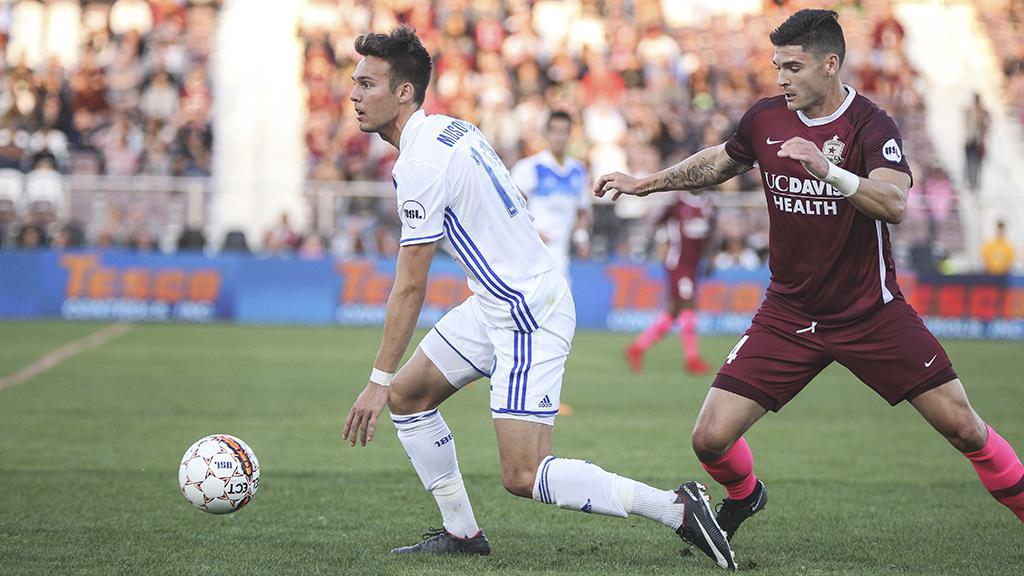 One of the best things about sports in general, not just soccer, is just when you think you’re starting to get a handle on where things might stand, a set of results like those from the past week arrives and quickly reminds you that aside from some things – such as Didier Drogba producing at least one preposterous free kick every season for Phoenix Rising FC – the ups and downs of the game is what keeps the season interesting. From a comeback that will etch itself into Reno’s history to a performance that few likely saw coming in Charlotte, the only predictable thing is the unpredictability to come.

1. FURIOUS FIVE: Down by a pair of goals at halftime of the final game of a tough four-game road trip, the only redeeming feature for Reno 1868 FC’s situation was the opponent it was facing. Facing rival Sacramento Republic FC, the option to pack it in and fight another day just wasn’t on the table as the second half kicked off with a refreshed lineup that saw Mohamad Thiaw and Brian Brown introduced to try and spark any kind of comeback. After a three-goal outburst in five minutes around the hour-mark that saw both Brown and Thiaw find the net, 1868 FC wrote the most memorable chapter in the young rivalry’s history as it came back to take victory after trailing by two goals for the first time in its history. Reno’s second season is now starting to mirror its first, when a slow start gave way to the side becoming a serious contender. This side isn’t all the way there yet, but it’s not hard to envision a serious run up the standings coming in the next few weeks.

2. DROPPING THE BALL: For Sacramento Republic FC, the feeling after Saturday night’s loss at Papa Murphy’s Park was one of regret both at the missed opportunity to take its first league victory against 1868 FC and the opportunity to keep pace with the other two sides at the top of the Western Conference. After an outstanding first half that saw Cameron Iwasa register a goal and assist in the opening 15 minutes, Sacramento didn’t register a shot in the opening 23 minutes of the second half as Reno overcame its deficit, and then only finished with one effort on target as it looked to try and salvage a point. “I think we came in and stopped playing the second half and got punished and deservedly so,” said Republic FC Head Coach Simon Elliott after the contest, an accurate summation of a night filled with promise that ended up being one to forget.

3. BLAST FROM THE PRESENT: You saw it, right? Didier Drogba’s 40-yard free kick for Phoenix Rising FC, part of a 5-1 rout of Tulsa Roughnecks FC at ONEOK Field, was hard to miss on Saturday night as it provided the biggest highlight of a display that saw the visitors rack up five goals for the first time in a league game in the club’s history. Coming at the venue that saw Rising FC suffer one of its toughest nights – a 6-3 defeat to the Roughnecks in the 2015 season – Phoenix racked up 30 shots overall and 12 on goal in a display that arguably could have been more lopsided in favor of the visitors. With Sacramento coming to visit the Phoenix Rising Soccer Complex this Saturday night, Head Coach Patrice Carteron’s side is flying high.

4. QUAD JACKS: If there was ever a game for the Charlotte Independence to break out of its month-long slump in form, Saturday’s Queen City Cup clash with FC Cincinnati was definitely the one. In a comprehensive 4-1 victory the Independence effectively beat Cincinnati at its own game as a midfield trio led by Alex Martinez and backed by Kay Voser and Yann Ekra were sharp in winning possession and subsequently in getting the ball into dangerous positions. Martinez in particular was all over the field for Charlotte, winning 13 of 17 duels, recording three shots on goal and creating two chances. The 26-year-old didn’t find the net as both Voser and Ekra did with sharp finishes of their own, but in snapping a five-game winless streak and four-game scoreless streak the Independence looked like a playoff contender again.

5. MIND THE GAPS: FC Cincinnati once again missed out on extending a winning streak past three games as key errors defensively opened space for the Independence to capitalize. On both Cordell Cato’s opening goal for Charlotte and Kay Voser’s third that quickly killed any momentum Cincinnati had gained from Danni Konig’s early second-half goal, both experienced midfielders took advantage of the space allowed by Cincinnati’s defense to offer a clean look at goal and capitalizes. It wasn’t all bad for Cincinnati, the side was again good in possession and created some good looks on goal itself as it put seven of its nine shots on target, but the freedom Charlotte’s midfield was given to produce led to the first major hiccup of the campaign for Head Coach Alan Koch’s side.

6. TWO-MONTH REPORT: Almost two months had passed since the first meeting between Nashville SC and Louisville City FC on the opening Saturday of the 2018 season, so when the teams met for the second time on Sunday evening at First Tennessee Park it provided a chance to see how Nashville had grown since it began its time in the USL with a defeat to the defending champions. In an impressive 2-0 victory for the hosts that saw Lebo Moloto score his first two goals for Nashville, the evolution the side had taken was evident as the players introduced to the starting lineup since that first meeting had an impact, with Ropapa Mensah’s attacking play being supplemented by a solid display down the left by Taylor Washington and a tremendous midfielder performance by Bolu Akinyode that saw him complete all 42 passes while recording three tackles and two interceptions. NSC Head Coach Gary Smith certainly seems close to having found his best starting lineup, and that bodes well for Nashville’s goal of a playoff berth in Year 1.

7. TARGET NOT ACQUIRED: Back-to-back defeats for the first time since July, 2016, while being held scoreless in each outing has raised a small red flag for Louisville City FC, which seemed to lack cohesiveness in the attacking third as Nashville did well to snuff out chances within the run of play for the visitors on Sunday. Louisville outshot its hosts 13-11 for the game, but the fact that the biggest chances for the side both came from free kicks by Cameron Lancaster and that only four of the side’s shots came from within the penalty area illustrated either that Nashville had an effective plan for what it expected Louisville to do, or that Louisville wasn’t effective enough in mixing things up to create enough good chances to earn something from the game. Either way, Head Coach James O’Connor has some things to work on, and not much time to do so with Wednesday night’s Lamar Hunt U.S. Open Cup contest breaking up the week.

8. MONARCHS LINKED IN: The 1-0 scoreline might not indicate it, but Real Monarchs SLC’s victory on Saturday afternoon against Fresno FC was among the more dominant of the weekend as the hosts took a third consecutive victory at Zions Bank Stadium to remain ahead of Phoenix Rising FC by a point in the Western Conference standings. Maikel Chang’s early goal was the difference in the game, but from there on the Monarchs rarely gave the Foxes a chance to find an equalizer as they held two-thirds of the game’s possession and limited Fresno to one shot on goal. In the middle of that dominance was Sebastian Velasquez, who in addition to providing the assist for Chang’s goal roved throughout the midfield, continually offering an outlet for teammates before moving the ball on to finish with 76 completed passes from 79 attempts. With Jose Hernandez, Justin Portillo and Charlie Adams all putting in stellar displays in possession, the Monarchs might have added to their lead, but it never really felt like they needed to as Fresno was left chasing shadows.

9. ON THE MON: There was a certain sense of inevitability about Pittsburgh Riverhounds SC’s 0-0 draw with Indy Eleven on Friday night at Highmark Stadium given the defensive exploits of both sides this season, but in terms of giving a view as to where the undefeated Hounds stood in relation to the rest of the Eastern Conference the overall performance by the hosts was one that should keep the optimism rising along the banks of the Monongahela as the side moved to eight games undefeated to start the season. The role of midfielder Kenardo Forbes – who arrived alongside Head Coach Bob Lilley this offseason – has a good deal to do with that as the Jamaican’s ability to read the game and break up possession helped the Hounds’ defensive effort that left Indy without a shot on goal. With the Hounds still yet to be scored on at Highmark, it’s becoming more and more apparent that this side is going to be a threat at the end of the season.

10. CHARGED UP: Three weeks ago, the Charleston Battery were sitting in the bottom third of the Eastern Conference with only one win to their name in the first five games of the season. Fast forward to Saturday night’s 2-1 victory against Bethlehem Steel FC at MUSC Health Stadium and Head Coach Mike Anhaeuser’s side is sitting in a top-two spot after a fourth consecutive victory, the club’s best league winning streak since it reeled off five in a row in the 2013 season. In what’s becoming a familiar pattern, Ataulla Guerra scored again for his fifth goal of the season – just one off his total for the 2017 regular season – and Gordon Wild produced a spectacular finish to bring the near-capacity crowd to its feet. As others around them are faltering, the Battery are hitting their stride with two more home games to go before the end of the month.

11. SPINNING FORWARD: After seven days that saw the side claim its first two victories of the season, things have got to be feeling a lot better in the Ottawa Fury FC locker room now than they were ahead of last Monday night’s visit to Penn FC. There are some real caveats for this side, however, which had to gut out its 2-0 victory against ATL UTD 2 on Saturday afternoon after a solid first-half display that produced a wonderful free kick finish by Carl Haworth. Ottawa’s defensive organization was again solid, but against stronger opposition the side is going to have to be able to possess the ball better to let some of the air out of the game. This Saturday’s trip to Charleston is going to be a real litmus test for how far Fury FC has come.