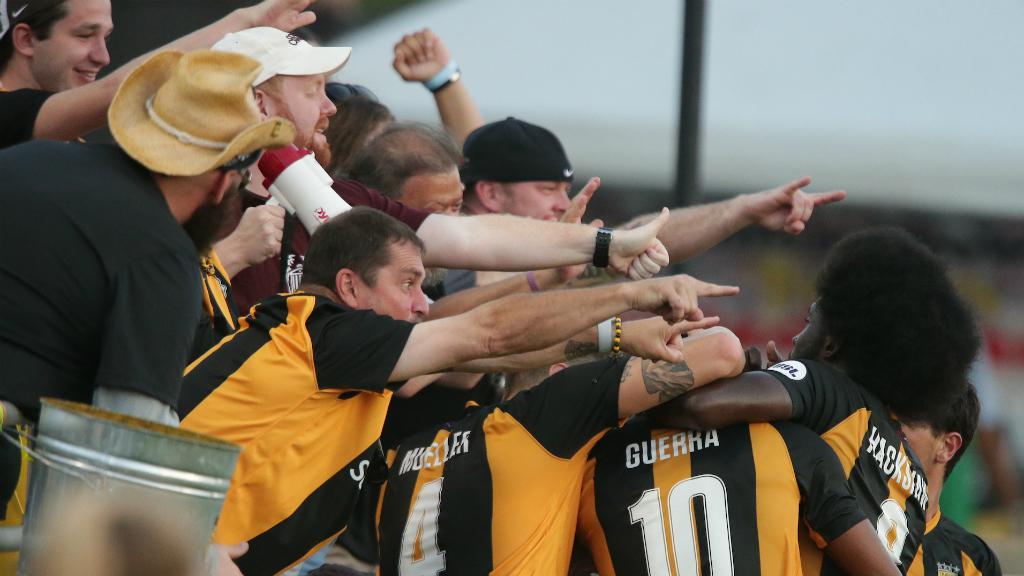 CHARLESTON, S.C. — With eight goals between them this season, the attacking partnership between the Charleston Battery's Gordon Wild and Ataulla Guerra again proved vital as the club took its fourth consecutive victory with a 2-1 win against Bethlehem Steel FC at MUSC Health Stadium on Saturday night. Both players found the net in the victory, with Guerra notching his fifth goal of the season to move into a tie for second in the race for the USL Golden Boot, as the chemistry that has developed between the two continued to flourish.

“We put them in there together because they’ve been so good in training. They’ve been catching goals in games and they have that quality to finish chances off,” said Battery Head Coach Mike Anhaeuser. “We didn’t play that well in the first half; Bethlehem actually outplayed us. Despite that those two guys showed their quality. Gordon [Wild] got the ball and crossed it to Ataulla [Guerra] to make it 1-0 in the 42nd minute to really open the game for us. Then in the second half we made some changes and adjusted and you could see we started to play a little better. Gordon [Wild] getting that second goal was just incredible. It really showed his quality. That was his weak foot!”

On loan from Atlanta United, Wild's third goal of the season was a highlight-reel volley that gave the Battery the cushion it would need to record its longest winning streak since early in the 2013 season. The rookie forward from the University of Maryland wouldn't take too much credit for the goal, however.

“[Neveal Hackshaw] played in a great cross" said Wild. “I saw the ball coming and, full risk, I tried to smash it and luckily I hit it well.”

With a two-goal lead, the Battery gave up a 65th minute goal from the penalty spot, which ended the club's shutout streak at 336 minutes and led to a nervous finish, but Charleston showed why it has been able to make such a dramatic shift up the standings in the past three weeks as it held on for a good result.

“It’s a tough one because you’re winning 2-0 and carrying the game then a tough call goes against you and you’re immediately under pressure,” said Anhaeuser. “After their goal, they kept the pressure on us. Sometimes you can crumble under that pressure or make a mistake because you’re frustrated. Our guys showed a lot of character and [goalkeeper] Joe [Kuzminsky] made a great save at the end of the game, which is what you need in that situation. That’s a huge three points for us.”

CONFIDENCE COMES FOR CHARLOTTE:  The Charlotte Independence produced their best performance of the season in a 4-1 win over FC Cincinnati at Sportsplex at Matthews on Saturday night to provide a boost in confidence the side needed after a run that had seen it go winless in five games and without a goal in four.

In snapping a seven-game undefeated streak for the visiting Eastern Conference leaders, the belief that the Independence in their abilities despite the club's downturn in form came to the fore.

"It is a good group of guys. They know they are a good group and they know they can play,” said Independence Head Coach Mike Jeffries. “Despite the fact that things weren't going well, spirits stayed high. Sometimes, whether it's an individual goal or a team goal, you need that first one and that sort of relaxes the group and takes the pressure off."

After a tense start Independence midfielder Cordell Cato scored the opening goal in the 38th minute and from there the Independence's players started to relax and play some extremely attractive soccer. Midfielders Yann Ekra, who notched the second goal of the night, and Kay Voser, who scored the third, both finished with passing accuracy rates above 90 percent on a solid volume of work as they combined for more than 100 passes attempted on the night.

“Getting the first goal relaxed the group quite a bit. It really helped us with confidence and being able to play. I thought that we played well in the beginning of the game, even in the first ten minutes we were involved and creating chances,” said Jeffries. “I felt like it was a really good half. The plus for us was the one right at the end of the first half when Yann [Ekra] strikes from outside of the box. I thought that gave us a good boost. It took us a little while in the second half, they switched formations and we didn't adapt quickly enough. I thought we were very good on counters in the second half and got at them on the break quite well. It was nice to see different guys step up and get goals.”

There had been glimpses throughout the season that Charlotte was capable of managing strong performances as it looked for a third consecutive trip to the USL Cup Playoffs. In notching four goals against the USL Eastern Conference leaders the Independence made a strong statement going forward.

“We needed to come out and perform and I think we did that tonight. The way we came out tonight was near perfect,” said Cato. “Every time you win you leave the game going forward with a lot of confidence so I think that is the most important thing going forward.”

FURY FC FINDING FORM: After a difficult start to the season, Ottawa Fury FC’s 2-0 win over ATL UTD 2 at TD Place on Saturday afternoon capped a big week for the club as it recorded its first two wins of the season and extended its shutout streak to three consecutive games.

After going six games without a win to start 2018 there's still ground to be made up to the top eight in the Eastern Conference, but Ottawa could well be turning the corner to start building a run toward the USL Cup Playoffs.

“I have to congratulate our players. I am very proud of the way they fought during the 95 minutes. It was fantastic to watch them fight and believe until the end,” said Ottawa Head Coach Nikola Popovic. “As you know, we are trying to create a culture here, and one of the core values is this belief and this positive attitude. For that, I am very, very proud."

One of those players who impressed was midfielder Carl Haworth, who was involved on both goals, providing the assist on the first and scoring a spectacular free kick for the second for his first goal of the new campaign. After the club's struggles in front of goal early in the season, getting both Haworth and fellow forward Steevan Dos Santos on the board for the first time was a big boost in confidence for the club as a whole.

“It was a full team effort. As forwards, we were working on creating more chances [in practice] throughout the week,” said Haworth. “If we were just a little bit more clinical, this game could have been 3-0, 4-0 or 5-0 even. All the credit to the lads at the back; [Colin] Falvey, Doneil [Henry] and Max [Crépeau]. For me, you could pick 11 man of the matches – everyone worked tirelessly for the team.”

A growing trend in soccer has been teams not needing the bulk of possession to win the match and that happened for Ottawa in this match as it held just 33 percent possession. Despite the win, that statistic left Popovic wanting more from his side in terms of style and ball retention.

“It’s perhaps not the best performance, but the fact is we won 2-0. I think we have to play a bit better than we did,” said Popovic. “We have to have more of the ball and we have to dominate the game. In this game, we didn’t do that, but the most important thing is that we were able to get the three points.”