As FCC moves into lead in East, league breaks barrier in weekly attendance 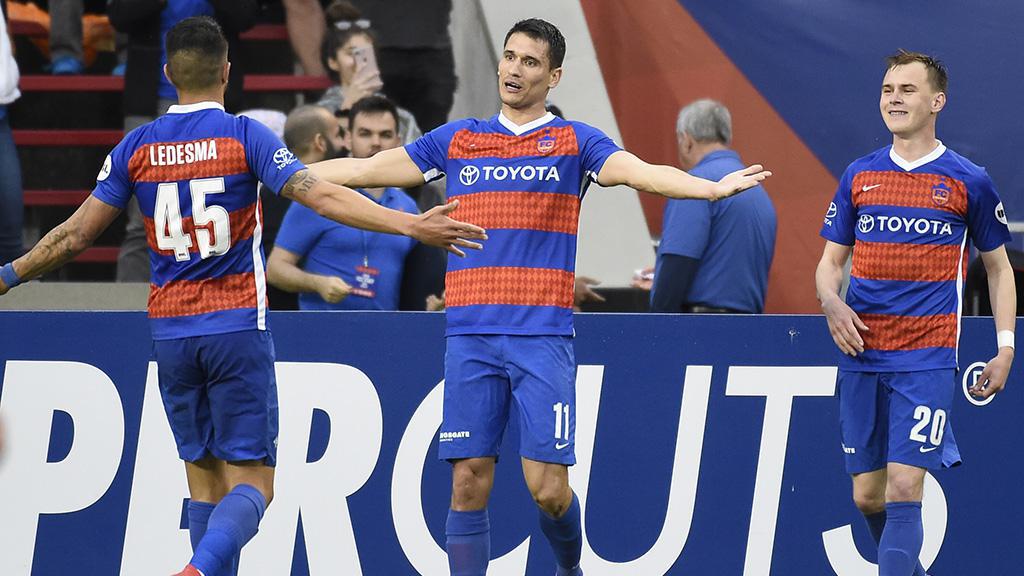 With one-quarter of the 2018 regular season complete, the past weekend saw the USL get a new leader in both the Eastern and Western Conferences and pass another significant attendance milestone in the process. As notable as FC Cincinnati’s ascent to top spot in the Eastern Conference, though, is the separation that’s starting to take place in the middle of the conference’s standings. With a three-point gap between seventh and eighth place, while there’s still some way to go, the hierarchy between the contenders and pretenders looks like it is forming already.

1. FIRING ON ALL CYLINDERS: With only three goals in its first four games this season it took a little time for FC Cincinnati’s attack to fully integrate, but after Saturday’s 4-2 victory against ATL UTD 2 the side has now scored 12 goals in its past four games and put together a three-game winning streak to move into first place in the Eastern Conference. In the middle of Saturday’s performance was Emmanuel Ledesma, who had two goals and one assist, and the Argentine has started to generate great chemistry with the returning standouts that FCC retained, contributing a team-high 14 key passes so far this season. Cincinnati has never won four games in a row in its history, but now gets a crack at that mark as it visits Charlotte next Saturday night.

2. BREAKING NEW GROUND: Cincinnati’s attendance of 22,532 fans at Nippert Stadium was part of another historic week for the USL overall at the turnstiles as the league welcomed 105,072 fans over the seven days of action to reach six figures for the first time in league history. The mark surpassed the previous single-week mark, set in Week 5 of the 2017 season, by more than 10,000 fans as the league continued to break new ground in the stands. Coming one week after the league passed half-a-million in total attendance for the season – two weeks earlier than its previous best – Week 8 of the 2018 regular season saw some other notable attendance numbers, with Ottawa Fury FC welcoming its largest crowd since joining the USL earlier in the week and Phoenix Rising FC setting a club record with a sellout crowd of 7,332 fans that got to witness a magical night at the Phoenix Rising Soccer Complex.

3. WATER SURGE: Going into Friday night’s game with the LA Galaxy II, Phoenix Rising FC had already shown a propensity to dig its way out of tough situations this season. It’s three-goal comeback in the second half against a Los Dos side that sparkled in the opening 45 minutes showed that experience again as Jason Johnson and Didier Drogba stole the show to keep Rising FC in the top four in the Western Conference thanks to a third 4-3 victory at the Phoenix Rising Soccer Complex since it opened at the start of the 2017 season. Drogba’s moment of the night, borrowing a water bottle while telling the two kids by the corner flag the side would equalize once he’d had a sip or two, added to the legend the former Côte D’Ivoire international has made for himself since arriving in the desert, dishing up a perfect delivery for Johnson to head home his second goal of the night, and his one-step penalty kick to seal victory completed another display that highlighted Rising FC’s resolve.

FEATURE: Rising as One, Fans Provided Boost for Phoenix

4. FIT FOR A KING: Having opened Zions Bank Stadium on Monday night with a scoreless draw, there might have been a little bit of added pressure for Real Monarchs SLC to come through with a victory, not only to christen its new home venue but also to keep pace with the rest of the leaders in the Western Conference as fellow contender Orange County SC came to visit. Thanks to Juan Mare’s dramatic stoppage-time winner, the Monarchs got exactly what they were looking for in a 2-1 victory that moved Real level on points with Orange County and within range of first place. The star of the night, though, was the Monarchs’ Maikel Chang, who not only got to place himself in the history books by scoring the first goal in Zions Bank Stadium history but also set up Mare’s goal in one of the biggest results of the weekend.

5. ROUTE TO THE TOP: Both the Monarchs and Orange County are now chasing Sacramento Republic FC, which got its own late finish on Sunday evening to claim its ninth win in its last 10 games against Seattle Sounders FC 2 with a 2-1 victory at Cheney Stadium. There was an element of good fortune to Sacramento’s winner, which came after Villyan Bijev’s low shot caromed off the right post, off the back of diving S2 goalkeeper Bryan Meredith and into the net, but the result provided an ideal bounce-back performance for the visitors after it had suffered its first loss of the season in midweek to the Portland Timbers 2. Republic FC now heads home for its first meeting of the season with Reno 1868 FC looking to maintain its edge at the top of the standings.

6. HOLDING STEADY: It was by no means the prettiest performance that Indy Eleven has produced this season, but in handing Louisville City FC its first defeat of the season at Lucas Oil Stadium on Saturday afternoon there was a marker of what could be to come for Head Coach Martin Rennie’s side. Indy needed to defend strongly and did so as Louisville’s pressure at times picked up possession in attacking positions that the Eleven recovered to manage well. The hosts also needed a bit of good fortune on their side, which arrived first via the handball that Louisville defender Paco Craig certainly couldn’t be blamed for conceding given his proximity to Indy winger Nathan Lewis that resulted in the only goal of the game by Ayoze, and then on the final play of the game when Louisville forward Luke Spencer was left wide open only to send his header wide. Sitting firmly in the playoff positions, though, Indy will take what it can get with a run of four interesting games ahead to round out the month.

7. CHIPPED AWAY: As the cross from Brian Ownby floated into the penalty area toward Luke Spencer, Louisville City FC fans had to be expecting the goal that would earn their side a late equalizer and preserve an undefeated start to the season. When the striker’s header instead slid wide of the left post it encapsulated a day that saw Louisville do a lot right but not quite put things together as cleanly as you would have expected. In a tight clash against their new regional rival that was enough to slip out of first place. “For our standards we need to play better, quicker, and sharper, and to receive the ball in better areas,” said Louisville Head Coach James O’Connor. “It was a very scrappy game.” Louisville will pick up the pieces, the side went 5-0-1 in games following a defeat a season ago, and Nashville should be in for a big challenge next Sunday.

8. PACK LEADER: Louisville’s loss on Saturday leaves Pittsburgh Riverhounds SC as the last team standing with an undefeated record in the USL this season after the Hounds cruised to a 2-1 victory against Toronto FC II in Head Coach Bob Lilley’s return to Marina Auto Stadium in Rochester, N.Y. as Neco Brett was again on target. Earning the position of last team standings hasn’t tended to mean too much in the bigger picture, although it is a good portent that a place in the postseason is in the offing, but Lilley was part of the exception to that rule three years ago. Back then, the Rochester Rhinos went 19 games undefeated to start the season, a run that led to first the USL Regular Season championship and then the USL Cup at the end of the season. There’s still a long way to go, and an intriguing game at Highmark Stadium against Indy Eleven up next on Friday night, but there’s certainly reason to believe in these Hounds.

9. PRODUCING THE GOODS: The side that sat as the last undefeated side in the league a season ago, San Antonio FC, hadn’t had close to the same start this year, but after Saturday’s 2-1 victory against Fresno FC that came before a crowd of 7,342 fans at Toyota Stadium things appear to be back on course for Head Coach Darren Powell’s side. With back-to-back victories for the first time this season SAFC is now back into the top eight in the Western Conference as on Saturday the side got the expected – a stellar display in goal by Diego Restrepo – and a pleasant surprise in the form of 19-year-old Alex Bruce’s first professional goal. The Alan Shearer-esque celebration from the Newcastle native was a perfect touch to a classic striker’s finish that set the hosts on their way ahead of next Saturday’s South Texas Derby.

10. BATTERY RECHARGED: The further from the club’s disastrous day out at Red Bull Arena we get, the clearer it is becoming that result was a major blip for the Charleston Battery, who claimed a third consecutive victory and top-four position in the Eastern Conference on Saturday night with a 2-0 victory against the Charlotte Independence in a performance that saw the hosts put in another dominant defensive display at MUSC Health Stadium. Discounting the club’s 5-2 defeat to the Red Bulls II on March 31, the Battery have now conceded only three goals in seven games this season, and with Ataulla Guerra taking advantage of anyone who gives him half-a-look at goal right now that’s more than enough to put Head Coach Mike Anhaeuser’s side right back in the middle of the playoff picture.

11. WHEN IT RAINS, IT POURS: There’s never been a spell in OKC Energy FC’s history like the seven-game losing streak the club is currently experiencing, but on Saturday night it was easy to feel sympathy for a side that just couldn’t get the breaks to go its way in another demoralizing defeat, this time to the Swope Park Rangers at Taft Stadium. Energy FC had far more chances to take the lead as Jose Angulo looked in good form again after coming back from injury, but a combination of a standout display by SPR goalkeeper Darrin MacLeod and some poor finishing saw the game remain scoreless late. When Swope Park was handed a late penalty kick that was converted by Hadji Barry, the air went out of the balloon as OKC failed to register a shot in the final four minutes and stoppage time as its nightmare run continued.