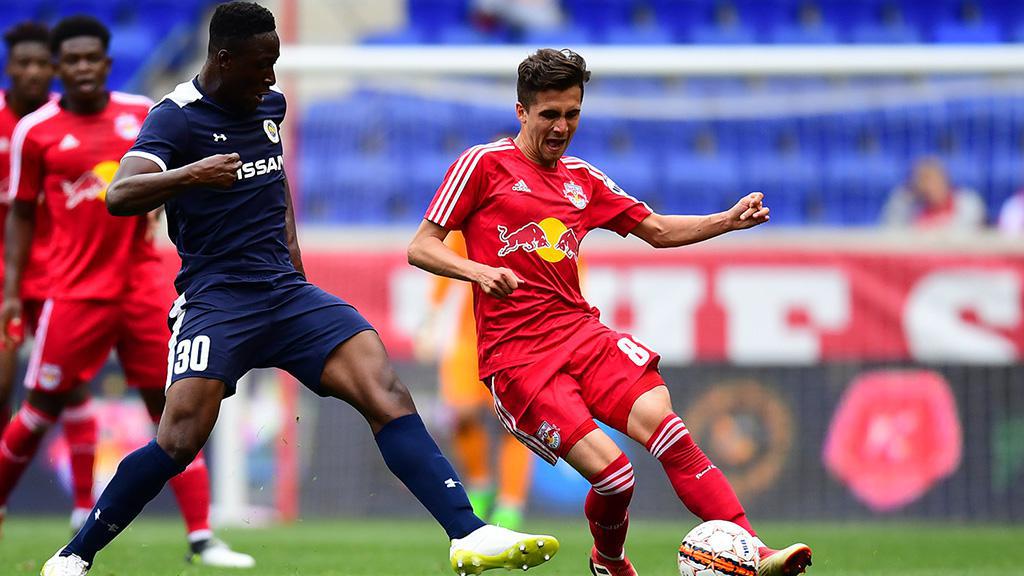 HARRISON, N.J. –  Both sides had chances to grab victory late, but the New York Red Bulls II and Nashville SC played to a 1-1 draw on Sunday afternoon at Red Bull Arena in a thrilling contest. Nashville took the lead in the seventh minute as Ropapa Mensah stole possession from New York’s Jordan Scarlett on the back line and moved in for a low finish, but the Red Bulls II began to take more control as the first half went on and a perfect pass by Chris Lema put in Vincent Bezecourt for a low finish to the left corner in the 27th minute. New York almost took the lead late in the first half as a clever piece of footwork by Cristian Casseres Jr. bought him space, only for his lifted finish past advancing Nashville goalkeeper Matt Pickens to slide just wide of the left post, while Mensah was denied just past the hour mark as Red Bulls II goalkeeper Evan Louro made a fine save to deny his header just past the hour-mark. New York’s Amando Moreno almost made a quick impact off the bench, being forced wide by Pickens as he got in behind the Nashville defense that made the angle for his attempted finish to narrow, but as the game opened up in the final 15 minutes both teams had chances to take the lead. Nashville’s Lebo Moloto went close in the 80th minute, slipping nicely past his marker only to send his finish into the left side-netting, while Jared Stroud’s finish for New York was blocked by prone teammate Brian White after the forward had slipped after challenging for a cross with five minutes to go. The hosts needed a big clearance off the line by Hassan Ndam in the 88th minute to keep out Moloto with Louro stranded, while Louro made a big save to keep out a header by Bolu Akinyode in stoppage time, but the last chance fell to New York to grab a dramatic win as a shot by Brian White flew high as the game ended level.

Chris Lema, New York Red Bulls II – Lema picked out a sensational pass to set up New York’s equalizer, but was also strong at both ends of the field, winning 9 of 15 duels, six tackles and recording two key passes.