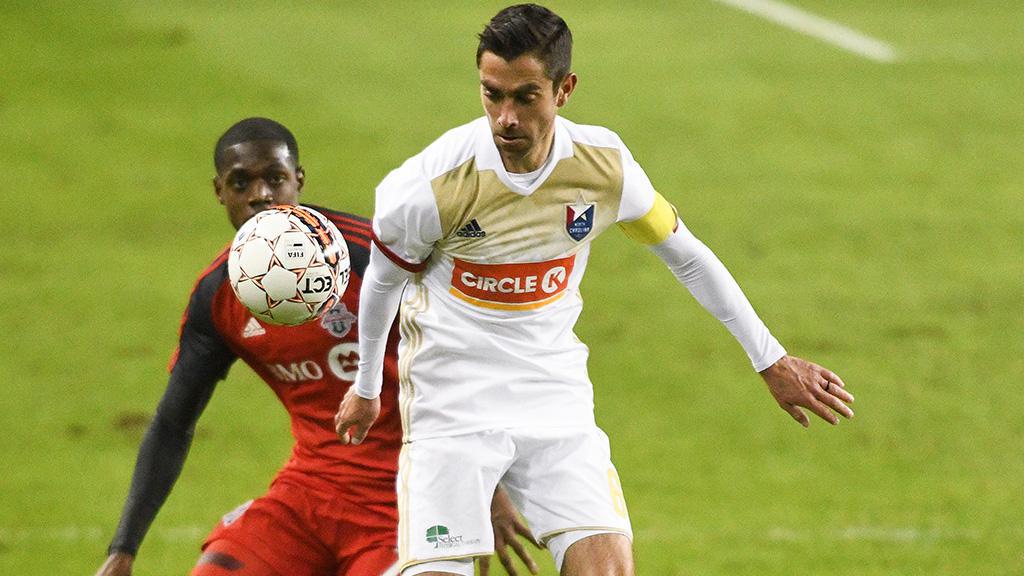 “It feels good. It feels weird, to be honest. I feel like I’ve blinked my eyes and now I’m 30 years old and have 10,000 minutes under my belt, but I still feel good and I’m ready to keep it running,” said da Luz this week.

For da Luz, NCFC has become a family as he has established himself in Cary, N.C., setting up a home in the town that he has called home for the last four years since beginning his second stint at the club. That has led to giving da Luz no desire to move on to anywhere else.

“I think it’s a combination of a lot of different things. I love the area and have a lot of family that’s close so it already felt like home to begin with,” he said. “And, just the way the club, the supporters and the whole community have embraced me, made it easy to decide to make this my home. Like I said, that goes both ways. I’ve expressed a desire to stay here long term and fortunately, the club has reciprocated that. It’s been the perfect relationship for me.”

That commitment to not just the team but also the community has made da Luz a leader both on and off the pitch.

“Austin’s been with us a long time. For the people that know him and know what he does off the field, it’s unbelievable the amount of work he does in the community,” said NCFC Head Coach Colin Clarke. “That’s not something that is always seen from the outside. He’s so much more than just a player. He’s a great ambassador for us on the field, but more importantly off the field.”

Returning home after three matches on the road where NCFC managed to pick up five points, the side is gaining in confidence ahead of Saturday’s game against Penn FC (7 p.m. ET | Match Center).

“It’s good to be back home. With three matches on the road and to come back with five points is in some ways disappointing when you win the first one,” said Clarke. I thought we had good chances to win the next two and it didn’t happen, but it was a good, positive road trip. The big thing is to come back home and win in front of our supporters before we go on a break.”

LOUISVILLE KEEPING IT THE SAME: Louisville City FC’s perfect record came to an end last week, forced to settle for a 1-1 draw with ATL UTD 2. On Saturday the defending champions have a chance to get things immediately on track when they take on Bethlehem Steel FC (7:30 p.m. ET | Match Center) in a rematch from the 2017 USL Cup Playoffs, but the key to getting back at track started immediately after the final whistle at Coolray Field.

“When you’re dealing with such a great group of guys, you have to manage the situation correctly ... and show an emotional response based on what’s happened,” said Louisville Head Coach James O’Connor this week. “I think that’s something we try not to do. We try to be very analytical and break it down and look at why to look at it from a non-emotional aspect. We don’t make decisions or react in an emotional aspect.”

That is how Louisville has always responded to not just the disappointing results but any result through the opening weeks of the season. There’s no room for players to get their heads down with disappointment or get too far ahead of themselves, even with the club off to its best start to a season in club history.

“We reflected on the game the same way we have the first four games. It’s frustrating to drop two points in the last minute, but we played some good football throughout the game that we can be proud of,” said Louisville midfielder Paolo DelPiccolo. “At the same time, there are clearly things we need to improve to make sure that doesn’t happen again. Nothing changes for us because even though we won the first four games we are always critical of our play and striving improve during the week. We know there is a target on our back so we always have great motivation and focus during the week.”

The improvement comes from standing alongside players, bringing encouragement for the positives but looking to push the players on to get even better.

“When you look at the performance, we speak to our guys who have been able to go through it and explain some aspects that we’ve been really, really pleased with and also some aspects we can be a little bit sharper on,” said O’Connor.

ZAYED READY FOR WEIRD DAY: When the Charlotte Independence take on Indy Eleven on Saturday (7 p.m. ET | Match Center) it will be a special day for Independence forward Eamon Zayed as he faces his former club, having played 59 games with Indy Eleven over the last two season.

“It's going to be weird. I went into January of this year expecting to be an Indy player for the coming season, so it's going to be strange and weird. But I'm a professional and that's the way things go,” said Zayed. “I'm just looking forward to the game and it's definitely one I've marked out. This is only my third week of training, so I'm still playing catch-up, but I'm looking forward to playing against them.”

While his late start to the season has seen Zayed recovering his fitness since his arrival in Charlotte, he was able to make his debut in the North Carolina derby on March 14th against North Carolina FC, coming off the bench in the 64th minute.

Having been one of the players who saw their time come to an end with the Eleven in a big offseason shakeup at the club despite scoring a club-record 26 goals in the past two seasons, Zayed is looking forward to going up against the club's revamped squad.

“It means a lot [to play against Indy Eleven]. I wish it was later in the season and I'd been around the guys and caught up on my fitness,” said Zayed. “I had two great years in Indy and some great memories there, so it's going to be fun playing against them. I'm going to enjoy it. I'm looking forward to it.”

Indy comes into the match in form, having won its last two matches and having conceded only four goals in four matches. That makes this match a strong test for the Independence but the hosts are prepared for the challenges coming.

“They've been very good defensively and very well-organized. They do a good job of getting numbers around the ball,” said Independence Head Coach Mike Jeffries. “They're really good on counterattacks. They've got a lot of pace in wide areas and they get forward very quickly. That's really where they're most dangerous; in their ability to win balls and transition forward. They work hard as a group defensively. They do a good job of doubling and pinching balls in the middle of the field which allows them to win balls in a good spot and counter. The strength through the first four games for them has been in the defending group by not giving away chances and not giving away goals.”