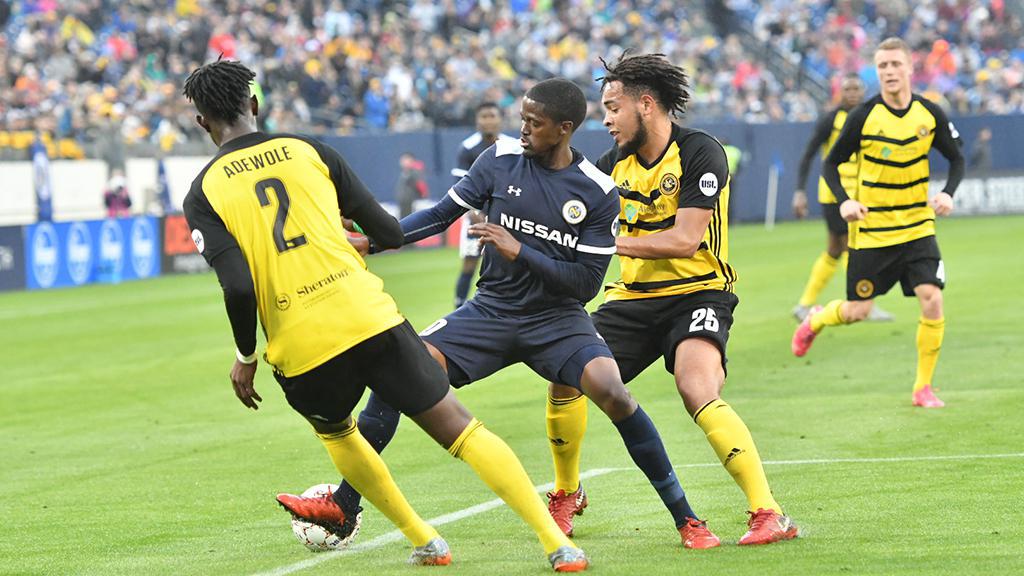 Another weekend of stellar attendance gave us more answers to preseason questions, and affirmations of the impressions we believed to be true when the season kicked off. From a blinding strike that landed on ESPN’s SportsCenter Top 10 to raucous crowds across the home openers that dotted the USL landscape, here are 11 takeaways from the second weekend of the regular season.

1. PLENTY OF BITE: The day was supposed to be Nashville SC’s as its Drive to Nissan Stadium produced a crowd of 18,922 for its inaugural home opener at the home of the NFL’s Tennessee Titans, but Pittsburgh Riverhounds SC came extremely close to spoiling the party with a performance that showed exactly the type of grit and creativity the club is looking for this year. The hallmark of new Pittsburgh Head Coach Bob Lilley’s teams over the years has been at least in part about making life difficult for opponents, and that resulted in a scrappy opening half-hour, but once Riverhounds SC found its range it looked the far more likely side to open the scoring. Only a pair of excellent saves from Nashville goalkeeper Matt Pickens kept the Hounds off the board, and while NSC almost produced some late heroics through Lebo Moloto the cohesiveness Head Coach Gary Smith seeks is still yet to be found.

2. WELCOME HOME: Nashville’s crowd of 18,922 saw its side earn the first point in club history, but it also had the distinction of being the highest-attended game in the United States over the weekend, leading another tremendous week for the USL overall in the stands. More than 80,000 fans turned out overall, and the league’s nine home openers saw an average of 7,421 fans in attendance on Saturday night as fans of the Tampa Bay Rowdies, Phoenix Rising FC and Las Vegas Lights FC in particular welcomed their clubs for the first time this regular season in what turned into a memorable night of action for all three teams.

3. OVER THE TOP, UNDER THE RADAR: Arguably the biggest spotlight in the Western Conference’s action fell on the first edition of the Silver State Cup, which ended with honors even after Las Vegas Lights FC and Reno 1868 FC each scored within a minute of each other at Cashman Field in exactly the sort of game Lights FC envisioned when it was introduced to the league, and saw the hosts emerge with four points from its first two contests. There’s been plenty of off-field entertainment that’s made Lights FC the center of attention – the most recent Friday’s introduction of Cash the Soccer Rocker – but beneath all the fun and games there might just be a team that understands where it is and has the means to get better.

4. CLINICAL KHARLTON: Lights FC will get a major test of its credentials this week when it plays a Swope Park Rangers side that has come out looking loaded offensively over its first two outings of the season, with Kharlton Belmar leading the way. The winner of Week 1’s USL Player of the Week honors was back at it again on Saturday with a second consecutive two-goal game to put the standout striker atop the early leaderboard for the USL Golden Boot. Belmar was prolific a season ago, his first with the Rangers, and only appears to have become more efficient this season with his finishing. Having surpassed 30 goals for his USL career in short order this season, opponents are going to have to know where Belmar is at all times in his current form.

5. READY FOR LIFTOFF: Phoenix Rising FC ensured there would be no repeat of its opening-season performance as an outstanding display by Chris Cortez and show-stopping finish by Solomon Asante that landed on ESPN’s SportsCenter Top 10 earned the club a 4-1 victory that lived up to the preseason expectations the club’s fans and onlookers had placed on the side. Rising FC regularly found ways to penetrate Energy FC’s defense, with eight of the hosts’ 10 shots coming from inside the penalty area, and while Cortez claimed the hat trick on the night the play of Collin Fernandez linking up play through the midfield also proved key. Fernandez completed more passes (39) than any other player on Rising FC as he and Gladson Awako put in a strong shift in midfield to propel Phoenix into good attacking positions.

6. POWER PLAY: After the manner of their victories in the opening weekend of the regular season, there was a sense of anticipation going into the Tampa Bay Rowdies’ home opener against Bethlehem Steel FC, and while the visitors almost landed the first blow early the night ended up showing the sort of separation a club like Tampa Bay might have on the rest of the pack in the Eastern Conference in the early going. The Rowdies were consistently a step faster, cheered on by a sellout crowd of 7,368 fans, especially down the left side where the trio of Zac Portillos, Marcel Schafer and Leo Fernandes combined to put consistent pressure on Bethlehem’s defense. Fernandes’ second goal of the season capped a marvelous display, and if he’s able to stay in better health than last season’s 11 appearances then the Rowdies have another potent attacking weapon at their disposal.

7. PROVING GROUND: Another left-sided midfielder that came to the fore on Saturday was ATL UTD 2’s Jon Gallagher, who combined with Yosef Samuel to produce a memorable 3-1 victory against the New York Red Bulls II in front of the 5,615 fans at Coolray Field that welcomed the new club to the league. Gallagher played a role in all three goals, scoring twice and setting up Samuel for the first goal in Atlanta’s USL history, to get Head Coach Scott Donnelly’s side off to a winning start. A first-round selection by Atlanta in the 2018 MLS SuperDraft, Gallagher has proven pedigree from his time at Notre Dame, and the Irish winger seems likely to be one for the future as he makes his first steps in the professional ranks.

8. LATE, LATE SHOW: No game over the weekend had the swings that were produced by Real Monarchs SLC and Tulsa Roughnecks FC, but just when it looked like the Roughnecks would take an impressive bounce-back victory in front of a raucous 5,203 fans at ONEOK Field in their home opener the defending regular-season champions showed just why they have that title to defend in a 3-2 victory. In truth, the Monarchs should have done a better job putting the game away in the first half after Corey Baird gave them the early lead, but goals by Chandler Hoffman and Charlie Adams just under 90 seconds apart in the dying moments of the game grabbed all three points out of the fire and left the Roughnecks to rue what might have been.

9. MOMENT OF MAGIC: Neither the Charleston Battery or Sacramento Republic FC produced tremendous attacking displays over the weekend, but in Ataulla Guerra and Cameron Iwasa both clubs got the moment they needed to take victory. The goals had similarities, with the cutback to elude a defender in the right side of the penalty area being followed by a neat far-post finish by Guerra for the Battery, and a whipped near-post finish by Iwasa for Sacramento, and both illustrated the quality both players can bring in the attacking third.

Someone check his ankles!

10. SNAPBACK WINNER: Going down inside two minutes wasn’t the ideal start for San Antonio FC in its home opener, but the hosts showed off their resilience in a tightly-fought contest against Saint Louis FC to emerge with an impressive 2-1 win in front of a sellout crowd of 7,946 fans at Toyota Field. The simplicity of STLFC’s opening goal, nodded home by Kyle Greig, was a great example of why Saint Louis will have better days than this, and the visitors on another day might have taken a point for their efforts. Two fine headers by Mikey Lopez and Kris Tyrpak, which accounted for San Antonio’s only two shots inside the penalty area for the contest, got things at least somewhat pointed in the right direction for the hosts after their opening loss in Sacramento.

11. ELEVEN UP: From the busy offseason of work put in by Indy Eleven Head Coach Martin Rennie it seemed clear on paper that Indy Eleven had the potential to be a playoff contender in the Eastern Conference this season. After its first official outing of the season on Saturday, though, it appears Indy is still a decent way from being a finished product as it eked out a 1-0 win against the Richmond Kickers at City Stadium. Given his display it seemed fitting that Jack McInerney recorded the first goal of Indy’s USL era, which earned the side victory, as he looked efficient in leading the line, creating three chances and completing 19 of 22 passes overall. With FC Cincinnati visiting Lucas Oil Stadium next weekend, though, the Eleven will know it likely needs to be better to get their season off to a flying start.