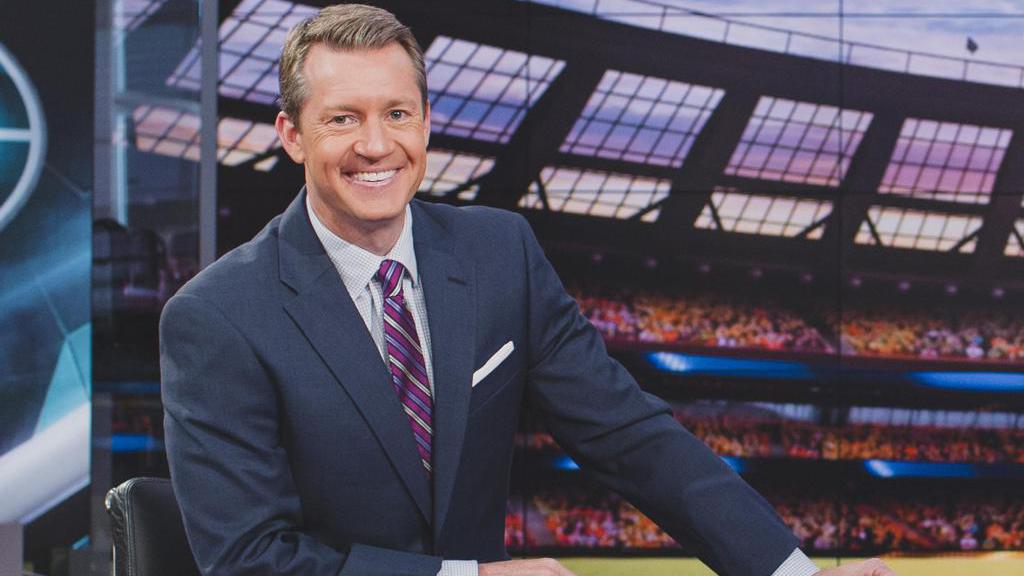 Stone, who will host Fox’s 2018 FIFA World Cup coverage this summer, also talked with USLSoccer.com about his history with the sport, which saw him compete collegiately at Colgate University, and the massive strides soccer has made since he first became a Rowdies fan as a youngster.

Q: What does it mean to be part of this, the launch of a new season for a club that you have so much history with?

Rob Stone: Yeah, I think it just goes to show the growth of this game that there are now events that happen like this in American soccer, and that you get a turnout and a huge pop for this, it shows the continued growth at a really staggering rate. The beauty about the Rowdies is it’s one of those few iconic names and brands that has shown the legs to survive from the 70s, 80s, 90s to where we are now. It’s arguably the most iconic name and brand in American soccer, and it’s the oldest team that’s still around now, which is surreal that we’re talking in those kinds of terms.

Q: You grew up with the Rowdies, what was it like growing up as a soccer fan in that era when you had such incredible names playing for the club?

RS: When I grew up as a fan of soccer, it was a chase. It was a chase to find the game. It wasn’t everywhere on television, it was Soccer Made in Germany on PBS, it was a random NASL game maybe on ABC Sports, and you prayed to God your team was there so you could actually see them. I lived in North Carolina and Connecticut as a fan of the Rowdies, and I would chase them down and badger my parents to take me to New England Tea Men games, take me to New York Cosmos games when the Rowdies were in town.

I was that idiot kid in the green and yellow hooped socks, the full kit – yes, I was a full-kit w----r as a kid – because that was my team and I didn’t care. I didn’t care going into the den of Giants Stadium in the swamp of New Jersey all kitted out as a kid because that was my team and that’s what I cared about. I took a lot of heat from Cosmos fans, but it was a good lesson for me to stick up for what you believe in, and I’ve always believed in the Rowdies. It’s my first love in sports, so I’m going to stay with them.

Q: We’ve seen the hooped socks on broadcasts as well, is it fun to be able to transmit that to the national audience?

RS: It is fun, because sometimes we’re asked to do things and other times we want to do it and it’s purely organic, and whenever the Rowdies come up, no-one’s asking me to talk about them, I’m doing it of my own free will and I think you can hear the change in my volume and my energy level and my passion.

RS: The uniqueness of it. The view. I just love that opening, that odd opening in the stadium that really makes no sense, but I love how the Rowdies have embraced it. It makes it different, it sets it apart where you’ve got this gorgeous view of what Florida should be. If you close your eyes and you say Florida, you’re seeing palm trees, you’re seeing water, you’re seeing boats, you’re seeing flip flops and you’re seeing leisure, and you see all of that through the channel, and yet all you need to do is tilt your head down to another degree and you see top-level soccer, an amazing fanbase, and a history that really right now is second-to-none in American soccer.

The most underrated & misunderstood stadium in America. And I it. pic.twitter.com/P0eDpR8DSm

When you have your own beer, you’ve officially made it pic.twitter.com/DxQR8VcIYn

Special thank you to @RobStoneONFOX for hosting our 2018 Season Kickoff Party! It was a pleasure having you at last night's event at the @MahaffeyTheater! pic.twitter.com/iY6IPeT6kQ

SOCCER'S GROWTH IN THE UNITED STATES

Q: The thing I find most interesting right now is soccer is becoming a much greater part of community pride, and it’s not just at the Major League Soccer Level, it’s across the country. You with the Rowdies, Alexi [Lalas] with Detroit, everyone is proud to represent Cincinnati, Sacramento, Louisville, Nashville, wherever it is, it’s being embraced as a civic entity now.

RS: Yeah, you’re seeing that everywhere, and there’s no way you could have forecast that phenomenon maybe even 10 years ago. I remember going to Asheville, North Carolina to go watch a World Cup 2014 game, and it’s Asheville, North Carolina, it’s out in the mountains, it’s the Blue Ridge Parkway, it’s not where you thought soccer would be, and guess what? Soccer was staring me right in the face and it was a sold-out bar. I had to call ahead to reserve a table for me and my friends, and it’s everywhere now. The gospel has been spread.

It’s almost like the California Missions, spreading the gospel up the coast of California, well guess what, this is the Soccer Missions, and it’s infiltrated everywhere. I take great joy in seeing these “smaller, minor-league cities” saying we’re now worthy of a team. We have a population that wants it, we have a fan-base that deserves it, we have ownership that wants to do it, and we have enough talent that the American population can handle it. It’s just spreading and spreading, and what the USL is doing and now what I’m seeing with USL D-3 absolutely warms my heart.

I remember when I graduated college I did a road trip with my best friend, and we wanted to hit ballparks. We weren’t diehard baseball fans, but it just felt like the thing to do, and we were like “yeah, we want to hit a couple of major league parks, but we also want to hit some of the minor league parks too, really get the nuances of the Durham Bulls or the San Antonio Mission, whatever these smaller teams were. Now, you can do it with soccer, and I wish I was graduating college now so I could do a summer road trip to all of these wonderful growing soccer communities that will take you in as one of their own just by pulling into the parking lot.

Q: You see the places where it’s springing up now, Birmingham, Memphis, you’ve got all of these Southeastern cities where the game has come alive following the tradition of the Rowdies. I don’t think anyone quite expected what Atlanta’s done, but there seems to have been this groundswell in the Southeast that the Rowdies are part of?

RS: For a long time the Southeast was confusing the experts. Boy, we’ve got to have a market here but nothing seems to stick, and there’s no way it’ll work here or there or Point A or Point B, and I for one didn’t think Atlanta was a fully-wise decision soccer-wise. I got it for the ownership and the stadium concept where we can get two teams there, but I grew up opposed to playing on artificial surface and in a football stadium, that just rubbed me the wrong way, but Atlanta has single-handedly changed that dynamic in one year.

That is the South, my friend, that’s Waffle House, Cracker Barrell, that is not where you expect soccer to be growing up, and it’s there, and it’s alive and well, and I think it sends a strong message to potential ownership groups, to potential sponsors, to the population itself not just here in North America but overseas as well that, holy cow, there’s more than just New York and L.A. for soccer. We can go to Atlanta, we can go to Tampa, we can go to Nashville, we can go to Portland, we can go from coast to coast, and including Canada, and you’re going to see a passionate fanbase, ownership and crowd that you’re going to want to be part of. 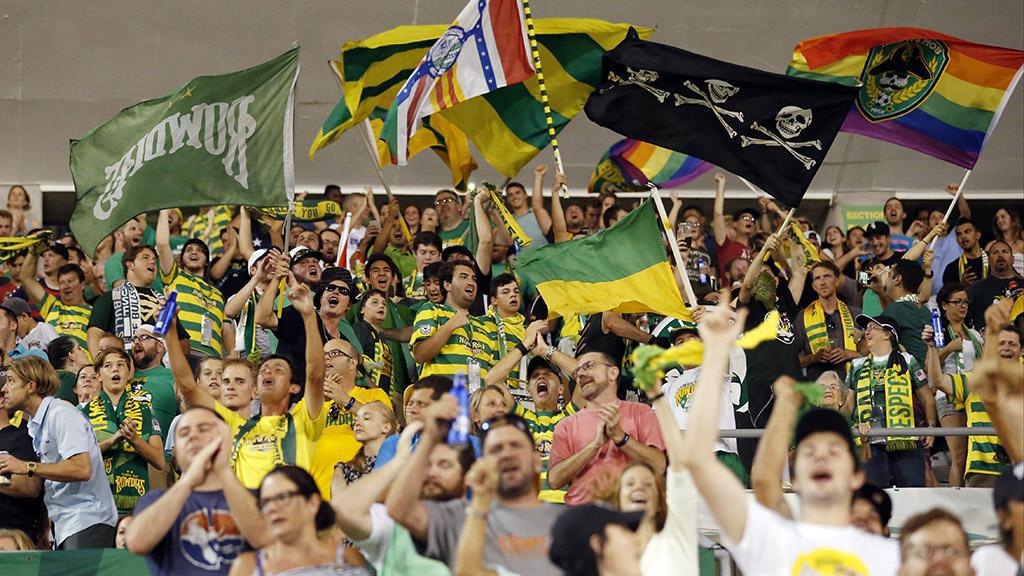 Before his move to Los Angeles, Stone could regularly be found in the crowd at Al Lang Stadium | Photo courtesy Matt May / Tampa Bay Rowdies

LOOKING BACK, LOOKING AHEAD

RS: … was awesome. It’s going to go down in the record books as one of the greatest Americans to ever play in the Patriot League!

Q: … what did you enjoy most about playing?

RS: I enjoyed the competition and the camaraderie. I love competing, and I loved fighting for a goal particularly with a team. It’s that team concept that I really miss. We replicate it to an extent in your workplace and I think we have a great team at Fox Sports, whether it’s my soccer team, or college football, or college basketball, but to be on stage tonight and see that team introduced one by one, and see the bond they have and the subtle looks they can give each other, and you know it means something, and the battles they’ve been through, the ups and the downs, that’s what I miss, and that’s what really drew me to the game, just this sense of “we’re all in this together, let’s fight for a good cause doing something that we absolutely love.”

Q: Your first World Cup was as a sideline reporter, now you’ve gradually moved up the food chain, what’s it going to be like sitting in the big chair this summer?

RS: This summer, I’ve been preparing for it mentally and physically for a long, long time and to be handed the keys to this World Cup castle is daunting, I don’t take it lightly, I think of the names that have had it, but I also think of the growth that those people have been part of, and to where it is now. This World Cup presentation will be nothing compared to what you would have seen eight years ago, and to a point four years ago. ESPN was a master steward for the sport, and what they did for the World Cup, elevating it to a massive level of importance, and when we covered it in ’98 there was this fear among the remotes that once the U.S. is out all the remotes were going to say, “no, thank you”, and turn off, and every four years that sentiment kinda got eroded, and they said, “wait a second, people understand these other teams, they can talk about Germany, they’re intrigued by what’s going on in South America, oh my goodness, look at the Asian explosion.”

Q: Speaking of overdelivering, some good promises made out there by [Bill Edwards on a championship season]. Marcel [Schafer] wouldn’t go quite as far, but this team looks like it has the makings of a serious championship contender. You’ll be remote in Russia, remote in L.A., is it going to be fun watching this team, this season?

RS: I’m pulled in so many directions in my life, but if there was a pie graph of my life there’s a chunk there that’s Green and Gold and keeps an eye on what’s going on. I’ve got people who remind me, I’ve got a lot of good friends who still live in the Tampa Bay area who send me texts, who’ll send me pictures, send me videos in the moment, who’ll Facetime me from games, so even if I’m back in California or in Red Square this summer I will be keeping track on how the Green and Gold are doing this season.