Steel FC Runs Away from Kickers 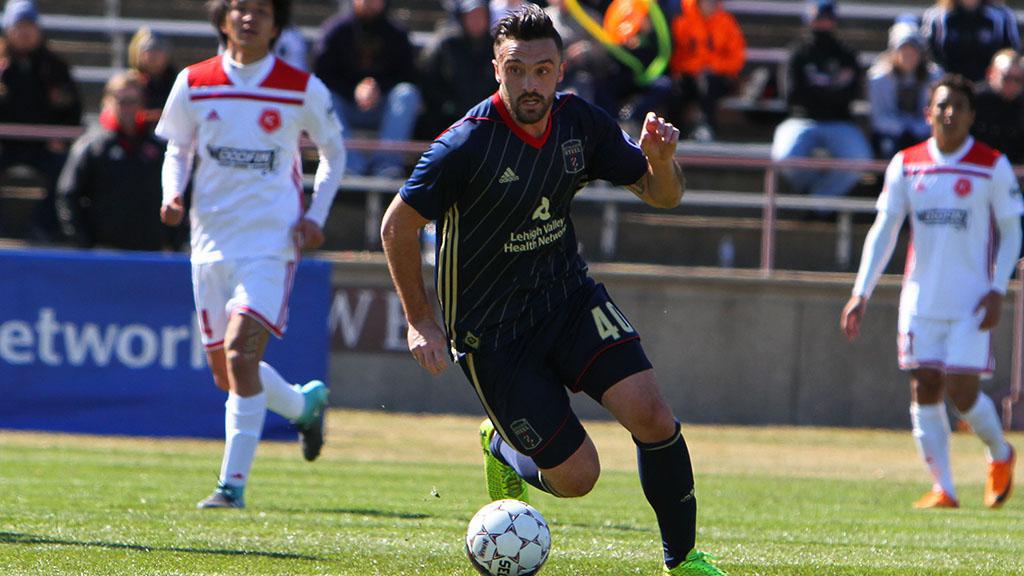 BETHLEHEM, Pa. – Bethlehem Steel FC scored twice in either half as it took a 4-1 victory against the Richmond Kickers on Sunday afternoon at Goodman Stadium to open the 2018 USL regular season. Bethlehem carried the play early and took the lead in the 24th minute when Matt Mahoney’s cross wasn’t cleanly claimed by Richmond goalkeeper Travis Worra, and Eric Ayuk tapped home from close range. Matt Real almost doubled Steel FC’s lead five minutes before halftime as his first-time shot rattled the crossbar, but moments later Derrick Jones picked up possession 40 yards from goal and drove past three defenders into the right side of the penalty area and finished into the left corner of the net. Richmond pulled a goal back in the 57th minute as a long-range shot by Oscar Umar took a slight deflection and flew into the left corner of the net, but a pair of goals by Brandon Allen allowed Steel FC to pull away for a comfortable home victory to open the season.

1. Bethlehem dominated much of the first half and was rewarded with two goals that came thanks to the pressure it was able to apply on the Kickers’ midfield and defense. Derrick Jones’ goal five minutes before halftime was illustrative, as Steel FC was able to recycle possession after a fierce drive rang off the crossbar by Matt Real to find Jones in space, and the former U.S. U20 international produced a tremendous run and finish after weaving through the Kickers’ defense to put a stamp on the first-half performance.

2. The Kickers had a poor first half that saw the side create only one clear chance and give away possession too easily. While that improved early in the second half as the side started to connect more consistently through the midfield, notably setting up Oscar Umar’s 57th-minute goal from range, the visitors were unable to test Steel FC goalkeeper John McCarthy consistently enough to emerge with something from the game. Creating betting connections into the attacking half will be key moving forward with a three-game home stand coming up next for the Kickers as they look to get off the mark this season.

3. Brandon Allen’s scoring pedigree in the USL made him a big pickup for Steel FC this offseason, and it came as no surprise when Allen scored his 25th and 26th regular-season goals in the league to put the victory away for Bethlehem in the final half-hour. Allen scored nine goals in 15 games for the New York Red Bulls II last season before ending the season on loan with Minnesota United FC, a scoring rate of a goal every 121.1 minutes. The 2016 USL Rookie of the Year certainly looked more than an adequate fit to replace Steel FC’s two leading scorers in 2017, Cory Burke and Seku Conneh, this season.