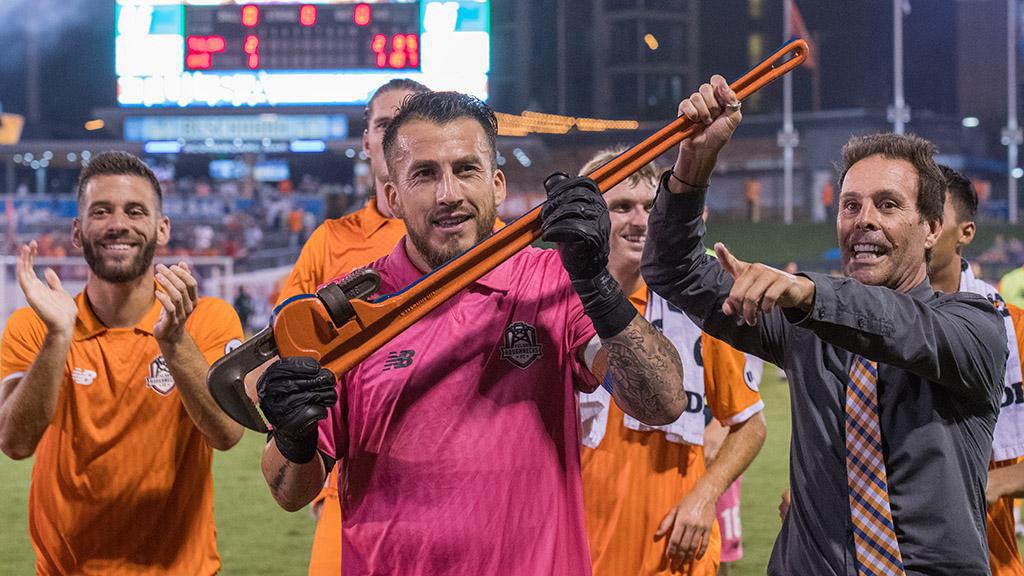 OKLAHOMA CITY – There’s some bad blood brewing in Oklahoma, with the first Black Gold Derby of 2018 kicking off the new USL season for OKC Energy FC and Tulsa Roughnecks FC on Saturday night at Taft Stadium (8 p.m. ET | Match Center). For the Energy FC part of that derby there’s a desire to get back the wrench, the trophy awarded for winning the derby, after losing out last year.

“We’re a bit upset, obviously with them beating us here on our home turf the first time we played them and then another loss over there,” said OKC defender Richard Dixon. “We were fortunate to grab the three points the third time we played them last year but we’d have loved to have come away with the wrench, so hopefully we can get off to a good start and get the three points in the bag.”

The first match of the season is always an important match for any side but with a derby opening up the season this match has even more significance.

PLAYOFF CONTENDERS LOOK TO START STRONGLY: With Sacramento Republic FC and San Antonio FC doing battle in the opening week of the season, two teams with a strong chance of winning the USL Western Conference will look to send a strong message on Saturday night when they open the season at Papa Murphy's Park (10:30 p.m. ET | Match Center).

For both teams it is important to hit the ground running, and with a long offseason coming to an end, SAFC is ready to get going on the 2018 season.

“We’re excited to get the season going. It’s been a long preseason and we’re just trying to get everything going. We’ve been working on our cohesiveness and team chemistry, and now that we have that we’re ready to get started with important games,” said SAFC midfielder Ryan Roushandel. “You probably couldn’t ask for a tougher start than a road match at Sacramento. They’re atmosphere is really good so it’ll be easy to get excited and be up for the challenge. It’s the first match of the year and the boys are ready to go.”

“San Antonio always puts out a good team, I think it will be a bit different this year from previous years because of the different personnel they have,” said Republic FC goalkeeper Josh Cohen. “But I’m super excited for the game and I’m looking forward to it and I think we’re looking good here and we’re ready to play.”

The excitement in the San Antonio camp is palpable as the club looks to follow on from an outstanding second season in the USL. After a second-place finish in the Western Conference a season ago, expectations for SAFC are high going into 2018, with a positive performance and result on the road the goal this weekend.

“We’re excited. I think all the players are ready after our preseason preparation. We’re pleased with the progress of the team, but preseason results don’t count for anything in the league,” said SAFC Head Coach Darren Powell. “Now we’ll play for real on Saturday against a good Sacramento team.”

Swope Park knows what to expect from one of Reno’s bigger offseason signings, with Mark Anthony Gonzalez having joined 1868 FC for the new season after notching 14 goals and six assists for the Rangers over the past two seasons, but the overall threat posed by last season's league-leading attack even without the departed Dane Kelly will give the Rangers' defense plenty to deal with in its season opener.

“They're a tough team, obviously. They've got Mark Anthony [Gonzalez], who played with us last year. He's solid,” said Rangers midfielder Felipe Hernandez. “It will be a good match-up for us. It's the first game of the season so both teams are going to want to start off on the right foot.”

For new Rangers Head Coach Paulo Nagamura the focus is all on his own team, about doing the right things and not worrying so much about the high-scoring offense of Reno.

For Reno, there’s confidence, playing at home and against a team it has a strong record against. 1868 FC took victories in both meetings between the clubs last season, and is ready to get started.

“We beat them here and at their place last year, but they are a very good team. They’ve made a push in the playoffs every year so it’ll be a good test for us,” said Reno defender Brent Richards. “I think we look good and we got a good result this weekend against Sac State. Hopefully we get a good result on Saturday.”