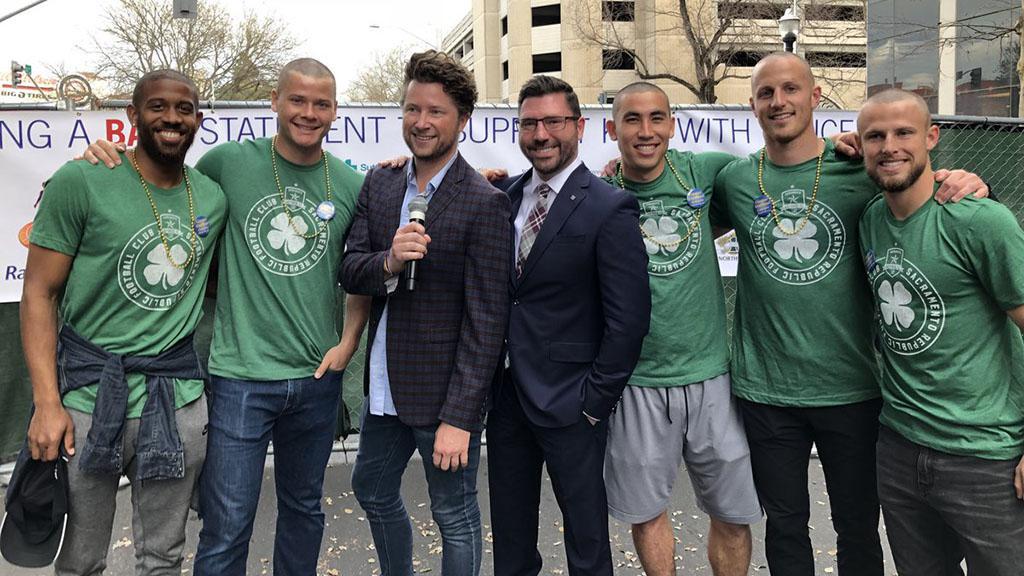 SACRAMENTO, Calif. – Five players from Sacramento Republic FC engaged in what has become a preseason tradition for the club and the Tower Bridge Battalion on Monday evening with the annual St. Baldrick's Day fundraiser with our friends at de Vere's Irish Pub, hosted by Keaton's Child Cancer Alliance.

Club captain Jeremy Hall and teammates Cameron Iwasa, Hayden Partain, Cole Seiler and Justin Schmidt all had their heads shaved as part of the event which raises money for childhood cancer research. Each player had set a target of $500 donations for their part in the event, which also included number of other prominent figures from around the city and six members of the Tower Bridge Battalion themselves.

Sacramento wasn’t the only club to participate in this year’s St. Baldrick’s fundraiser, with Las Vegas Lights FC also being part of an event this past Sunday at New York – New York Hotel & Casino that saw El Chelis show off his skills with a pair of clippers.

Donations can still be made to the Tower Bridge Battalion’s fundraiser, and to the individual player donation pages for Hall, Iwasa, Partain, Seiler and Schmidt.

KOBAYASHI ENJOYING LIFE IN VEGAS: Japanese veteran midfielder Daigo Kobayashi arrived in Las Vegas late in Las Vegas Lights FC's preseason but has wasted no time in becoming a key part of the expansion side. For Kobayashi, the Entertainment Capital of the World has become something of a second home over the years since first joining Vancouver Whitecaps FC in 2013.

“Every offseason, I’m here in Las Vegas for training, and for soccer clinics for Japanese kids,” said Kobayashi in a Q&A with the club website. “This city has become my second hometown, and I’m so happy to play for the new team here now. I have so many friends here who support me, and they also helped me get together the clinic I help run.”

With such familiarity with Las Vegas, Kobayashi is excited for his second home to now be his full-time home, and to represent the city.

“I feel this city’s people are so kind, and I love this city. I’m really happy to be here as part of a new team that is building up, along with our fans and supporters,” said Kobayashi. “We are all growing together, and this city needs that. The stadium atmosphere has been very nice already, and we have some very good fans.”

Despite coming in part way through the preseason, a good team environment has allowed players like Kobayashi to get settled in as they prepare for Saturday's opening game of the season against fellow USL expansion club Fresno FC at Chukchansi Park.

“We’ve grown up as a team so fast, everyone speaks to everyone. Good friends help each other, and they’ve helped me. I already think we’re a good team,” said Kobayashi. “We have a good head coach in Chelís and a good assistant in Isidro Sánchez. That’s why we’re good together.”

THE LUCK OF THE IRISH: With the first home match for 11 teams this season falling on St. Patrick’s day a number of those teams are promoting the match with an Irish theme. On Monday the Charlotte Independence became the latest to join that list.

For Saturday’s match against Ottawa Fury FC, the Charlotte Independence will be following on from the Charlotte St. Patrick’s Day Parade with some unique beer. The Independence will be importing a selection of Irish craft beers from O’Hara’s brewery, a local brewery in County Carlow, 65 miles south-west of Dublin. The Matthews Sportsplex will be the only location in North Carolina that will have Irish craft beer available.

“We are delighted to be hosting our season-opener on such a national and international day of celebration,” said Jim McPhiliamy, President of the Charlotte Independence. “We hope that, after they have enjoyed the St. Patrick’s Day parade in Uptown Charlotte, sports fans will head over to Matthews Sportsplex to cheer on the Charlotte Independence on the opening game of our 2018 season – which will be our best season yet.”