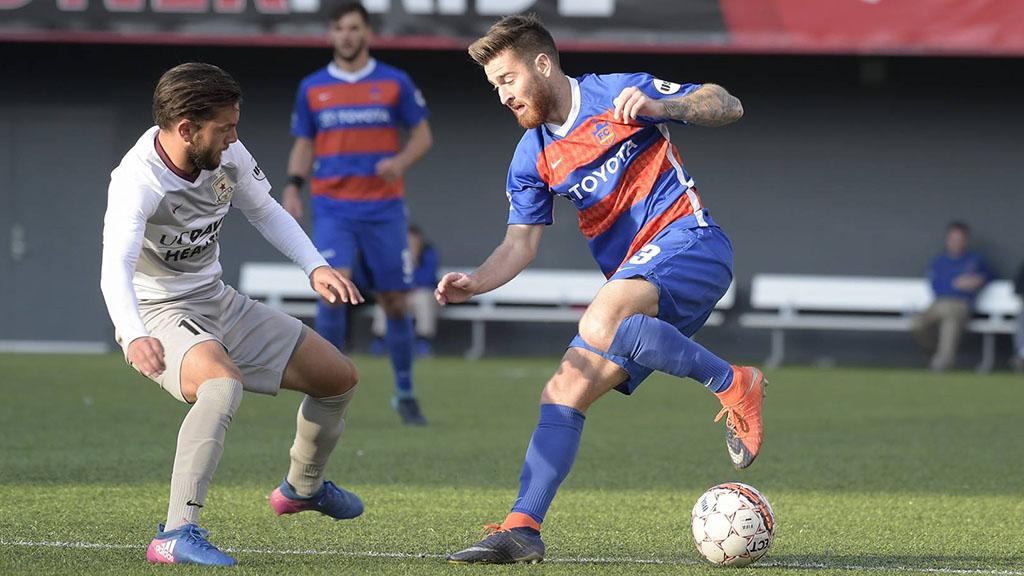 The final official weekend of the preseason brought with it some high-profile finales, and some interesting results to go with them. With the auditions over, and the countdown to the opening weekend of the 2018 USL regular season begun, the question now becomes who’s ready for primetime?

1. FINDING THE RHYTHM: One of the hallmarks to Sacramento Republic FC’s success since its inception in 2014 has been its ability to maintain possession and control the tempo of a game. In Republic FC’s 2-1 victory against FC Cincinnati on Saturday, the visitors were able to do just that at Nippert Stadium as goals by Cameron Iwasa and Villyan Bijev proved enough to return to the west coast with a morale-boosting win. Sacramento’s continued willingness to work the ball to create chances sets up for a fascinating opening game of the regular season, when San Antonio FC comes to Papa Murphy’s Park on Saturday night.

2. PICKING BACK UP: San Antonio, for its part, appears to be ready to pick up right where it left off last season after a 5-1 victory against Tulsa Roughnecks FC on Saturday that saw the side notch four goals in the second half. The victory put a cap on what’s been an impressive preseason for SAFC, which will now look to build on its second-place finish in the Western Conference a season ago with a squad that appears to be full of confidence. “We've progressed from week to week and today was no different,” said Head Coach Darren Powell. “We wanted to get out on the front foot and Tulsa made it difficult for us, but we managed to get a couple of goals in quick succession and that made the score-line look more comfortable than it actually was.”

3. HOT AND COLD: One of the interesting aspects of Tulsa Roughnecks FC’s first trip to the USL Cup Playoffs a season ago was the manner by which it was accomplished, with the Roughnecks recording the fewest draws of any side that reached the postseason in 2017. If Saturday’s result is any indication, there could be another season of ups and downs in store at ONEOK Field, with the Roughnecks having put in some stellar performances this preseason in addition to Saturday’s tough defeat. Head Coach David Vaudreuil will certainly have his hands full this season, but a positive display in the Black Gold Derby this Saturday against OKC Energy FC would be an excellent way to get things started for the side.

4. BUMP IN THE ROAD: FC Cincinnati Head Coach Alan Koch didn’t mince words after his side’s defeat to Sacramento Republic FC on Saturday; “That wasn't even close to where we need to be at this stage of our preseason,” Koch said as his side ended its preparations with a defeat. Following a draw against Nashville SC the previous weekend, Cincinnati doesn’t quite appear to be clicking the way it would hope entering its opening game of the season. That matchup shouldn’t fill FCC with confidence, either, with a visit to the Charleston Battery giving Cincinnati an opening-night opponent that it hasn’t earned victory against in any of its previous meetings over the past two seasons.

5. MIGHTY MAC: Individual form in preseason isn’t always an indicator of what’s to come, but the fact that Louisville City FC’s Niall McCabe was again on target in a 1-1 draw against Saint Louis FC in the defending USL Cup champion’s final preseason outing was notable. McCabe’s goal was his third this preseason, matching his total from a season ago, which could mean a breakout year is in store for the Irish attacking midfielder. “Niall’s had a great preseason – great attitude, great work ethic, et cetera, so we’ve been pleased with Niall but with all the guys really,” said Louisville Head Coach O’Connor after the game. “In the end, when you look at the changes we made, in that last 30 minutes they were making changes and our lads were playing against fresher players, yet we maintained our level of intensity, which is important.”

6. TIGHTENING UP: Saint Louis FC knew its final preseason game against Louisville would likely give it the strongest test it would receive prior to business of the regular season, and afterward Head Coach Anthony Pulis came away feeling there was still work to be done if the side is to reach the upper echelons of the league this season. “Our decision making, speed and quality of passing is certainly something that has to get better all over the field,” said Pulis. “Defensively we did alright, but still aspects of that need addressing as well.” Saint Louis’ offseason moves have led to some lopsided results this preseason, but Saturday’s result will likely put a tighter focus in place ahead of Friday’s season-opener against Rio Grande Valley FC.

7. FUELING THE FIRE: Indy Eleven had a shorter preseason than many teams, but after getting both a positive 2-0 victory against the Chicago Fire on Sunday afternoon at Toyota Field and a majority of his potential starting 11 a full 90 minutes, Head Coach Martin Rennie was pleased with where the side was placed ahead of its first USL season. “I think towards the end of the game, [the players] were getting a little bit tired, but for most of the game I thought we played really well,” said Rennie. “We had good possession, scored good goals, created good chances and defended well throughout the game. I’m very pleased with where we’re at in this stage of our preseason.”

8. UPSIDE DOWN: On the face of it, you might have seen the box score from Nashville SC’s 3-1 win against Chattanooga FC on Saturday, which saw the visitors notch three first-half goals at Finlay Stadium before conceding in the second half, and come away with the idea that NSC’s opening 45 minutes was the one the side was pleased with. According to Head Coach Gary Smith, though, the inverse was actually the case. “I was a little disappointed in the first period,” Smith said after the game. “Other than the goals, I think there were some areas where we could have been sharper. I actually thought the second period we looked more threatening, despite not being able to convert.” A win’s a win, though, and the confidence that can be taken from that will be important with a trip to Louisville the test that opens the regular season. 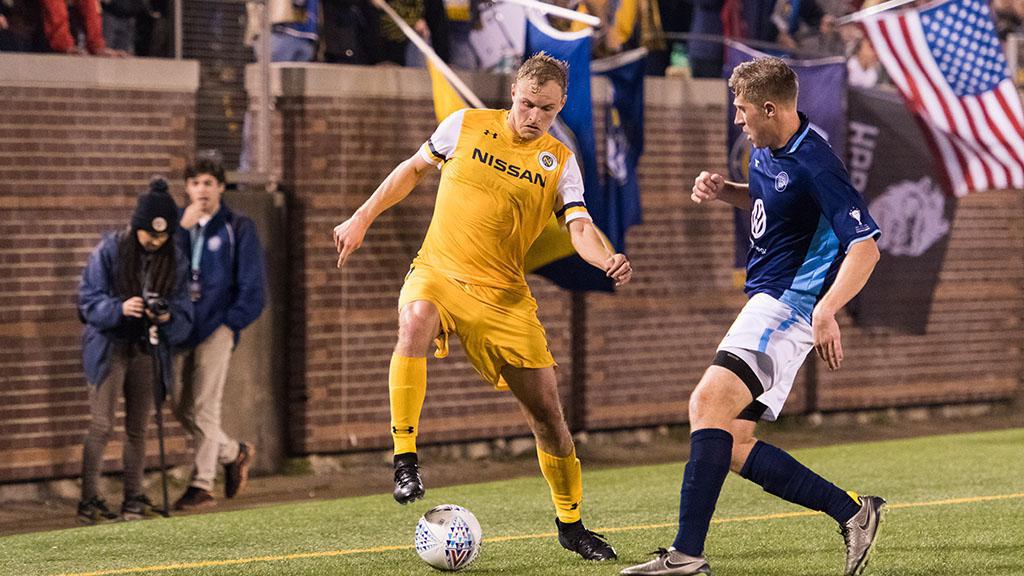 9. TURNING IT ON: After conceding late in the first half to go into the halftime break level with the University of South Florida on Friday, Tampa Bay Rowdies Head Coach Stuart Campbell wanted to see a positive reaction from his side to start the second half. Two goals in two minutes by Michael Nanchoff and Leo Fernandes inside the opening 10 minutes after the break gave Campbell just that, allowing the Rowdies to go on to a 5-2 victory against their crosstown college counterparts. The Rowdies are rightfully pegged as one of the preseason favorites for silverware this season, and they’ll be aiming to put down a marker in their return to Sahlen’s Stadium at WakeMed Soccer Park this Saturday to face North Carolina FC.

10. PERFECT PREPARATION: There are times when preseason results can end up looking like a mirage once the regular season arrives, but the fact that Pittsburgh Riverhounds SC earned its eight-game slate with its eighth victory on Saturday in a 3-2 win against Keystone Derby Cup rival Penn FC at Highmark Stadium could easily be a sign of things to come this season. The Hounds will have one more tune-up before it visits Nashville SC for its opening game of the season on March 24 at Nissan Stadium, but this side feels like one lying in wait for the rest of the Eastern Conference.

11. TIME TO SHINE: However long or short a preseason has been, what any coach will tell is that beyond any results what has mattered most over the past two months has been ensuring their side is in position to make a fast start to the new season. Now, as we begin the countdown to Friday night’s kickoff of 31 weeks of regular season and four weeks of playoffs, teams know who they are, and potentially where they’re headed as the season moves on. All the hopes and dreams are still alive and well, at least for now. It’s going to be a fascinating year ahead.