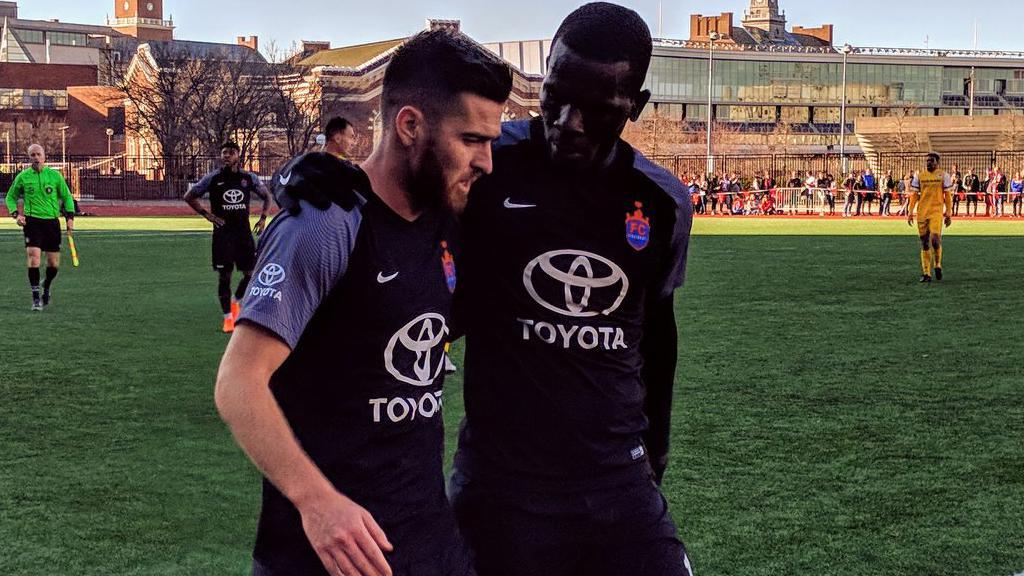 CINCINNATI – One thing that has stood out for FC Cincinnati this preseason has been the variety of goalscorers throughout its exhibtion schedule. That trend continued on Saturday night as Lance Laing and Emery Welshman scored in a 2-2 draw against Nashville SC at a sold-out Gettler Field on the campus of the University of Cincinnati, making the duo the eighth and ninth scorers this preseason for the club.

That comes as a response to the absence of forward Djiby Fall, who scored 16 of the club's 42 goals in the USL regular season a year ago, following on from Sean Okoli scoring the same number in 2016, which won him the USL Golden Boot. This year that is not the case, and in his first full preseason Koch has been focused on building a versatile squad.

“We give the guys the framework to play, and that's why we train in a certain way. But the game is life and there are certain moments you have to make decisions and sometimes you want to play beautiful soccer and other times you have to be a bit more one-dimensional,” said Koch.

The diversity of play, and of goalscorers, is something that pleases the squad as well, knowing that there will be opportunities throughout the season. For returning veteran Corben Bone, the diversity within the club's attacking corps an exciting prospect.

“That's the ambition when you bring in attacking players is for everyone to have a chance to score and when you have the chance, to put it in the back of the net,” Bone said. “To spread the scoring around the team shows everyone's capabilities in front of goal and also, if one guy is not having a great finishing day, someone else will step up. That's one of the great qualities of our team, and hopefully it continues.”

RENO 1868 FC LOOKING FOR WINS: After a stellar inaugural season, including a USL record goal-scoring haul, Reno 1868 FC is looking to do even better in its second season this year. Despite the departure of 2017 USL Golden Boot-winner Dane Kelly, 1868 FC is coming into a new season confident, in part because of strong recruitment that should allow the attack to continue to thrive.

One of those new recruits, former Orange County SC forward Jerry van Ewijk, is confident he can help fill the need up front, and pleased with his new club and its attitude to matches. “I want to win games again,” van Ewijk said to the Reno Gazette-Journal. “We focus on attacking and I like that a lot. I want to help this team win games.”

One big change for Reno will be having its own in-state rivalry, with Las Vegas Lights FC entering the USL in 2018. On Monday the two clubs launched nevadasoccervote.com, asking fans from both sets of teams to help name the new rivalry series that kicks off on March 24 at Cashman Field in downtown Las Vegas. For Nevada native and former University of Nevada – Las Vegas standout Danny Musovski, who last week joined Reno on loan from the San Jose Earthquakes, the prospect of an in-state matchup in his rookie season is especially exciting.

“I never thought I’d be playing with Reno, against Vegas, in my life. It’s going to be something fun. It will be a special moment playing against Las Vegas’ first pro franchise,” said Musovski.

Musovski put in a solid shift this past Saturday as Reno played host to Colorado Springs Switchbacks FC, and while the side fell 1-0 to its USL Western Conference rival the chances the side created throughout the contest boded well for the future as the club looks to fill the gap left by Kelly and his 18 goals from 2018. For Head Coach Ian Russell finding a solution to Kelly's offseason departure is the question which will define the season, but with the players the club has brought in this offseason – including former Swope Park Rangers marksman Mark Anthony Gonzalez and ex-Tulsa Roughnecks FC forward Christian Thierjung – Russell isn't overly concerned that his side will lack for goals this year.

“Maybe it’s a couple of guys score nine. We definitely have a lot of guys who can score goals, so we’ll be fine there,” said Russell. 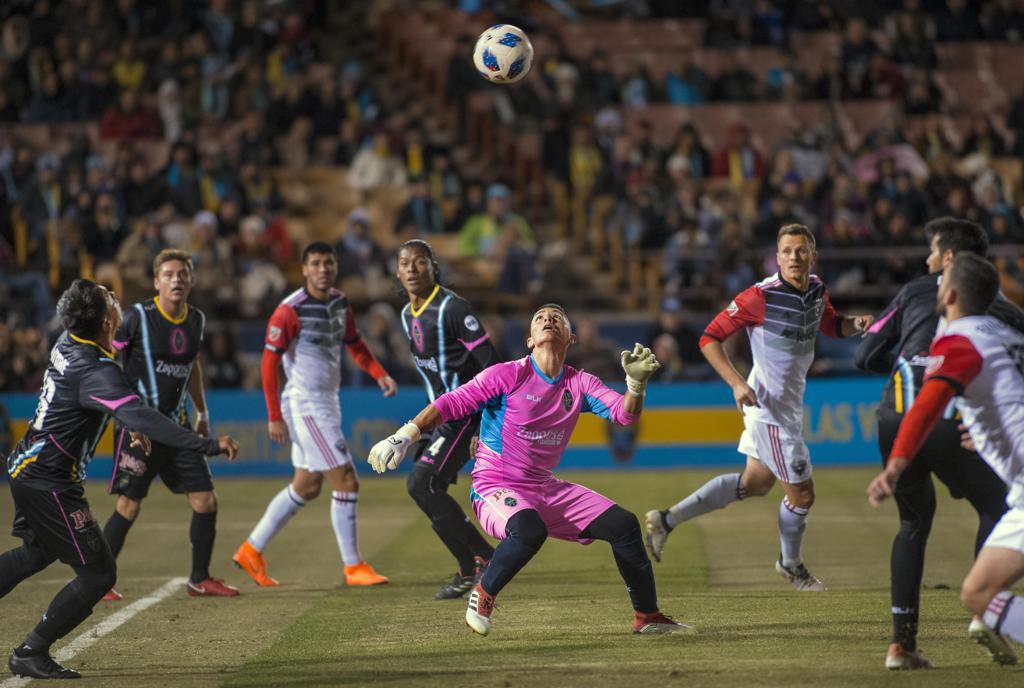 VEGAS LOCAL READY TO START: It has been a whirlwind few months for Las Vegas local and Lights FC goalkeeper Angel Alvarez. As promised by Head Coach El Chelis, who wanted the team to “smell like Vegas”, places have been made available for locals, with Alvarez among the contingent in the club's preseason squad.

“Dreams can start anywhere,” said Alvarez on the club's website. “When I was in high school, my goal was to become a professional soccer player. It’s crazy to think that I used to play my high school games a mile away from where I play my pro games now.”

Being a prominent local player put Alvarez in the spotlight, earning him a phone call from Lights FC goalkeeping coach Romilio Gomez to invite him to the training camp. That in turn pushed Alvarez to see himself as an example and a role model for the youth soccer players of Vegas, even at the tender age of 20.

The born-and-raised Vegas goalkeeper has seen his experience grow already, learning from Chelis and Gomez along with the rest of the squad. Alvarez has seen himself pushed hard into his first professional season but is proud and confident heading into the club's inaugural game on March 17th against Fresno FC.

“Just being here is special – Having Chelís’s confidence in me, to represent his team and his weekly work, it definitely motivates me to know I’m one of the few Vegas guys on the team,” Alvarez said. “I had the confidence, I believed in myself, I knew it wasn’t going to be easy, and it hasn’t been easy. There’s been tough competition, other goalkeepers who have pushed me to keep getting better every day, to give the best that I could in every practice, to understand that this is serious now.”

MONARCHS MAKING MOST OF CALI: Real Monarchs SLC headed further west for preseason training in Davis, Calif. last week, with the defending USL Regular Season champion using the time to try and rebuild the chemistry within a squad that has not only some high-profile returning players, but also some solid newcomers.

With games this week against USL Western Conference rivals Reno 1868 FC and Fresno FC lined up for this Wednesday and this Saturday respectively, the Monarchs are going to get two solid tests before they return to Salt Lake City to begin the defense of their regular season championship. With the continuity the side has on and off the field, the focus for the side has been on the team’s identity, and getting its newcomers accustomed to the expectations that created last season’s success.

“The boys are certainly grabbing ahold of what we’re putting in front of them,” Monarchs Assistant Coach Danny Cruz told the club’s website. “We’re getting more familiar with each other and one another’s tendencies on the field. We’re looking for those relationships to continue growing as we get closer to our match with Tulsa on opening day.”

Building camaraderie off the field as well as on is also a theme, as it is for many teams around the USL, as newcomers like former Charleston Battery standouts Justin Portillo and Maikel Chang and former Colorado Springs Switchbacks FC forward Masta Kacher get used to their new surroundings.

“Everyone is blending in together really well,” Cruz said. “I think everyone is grasping the concepts and the attitude has been first class from everyone who has been here in California.”