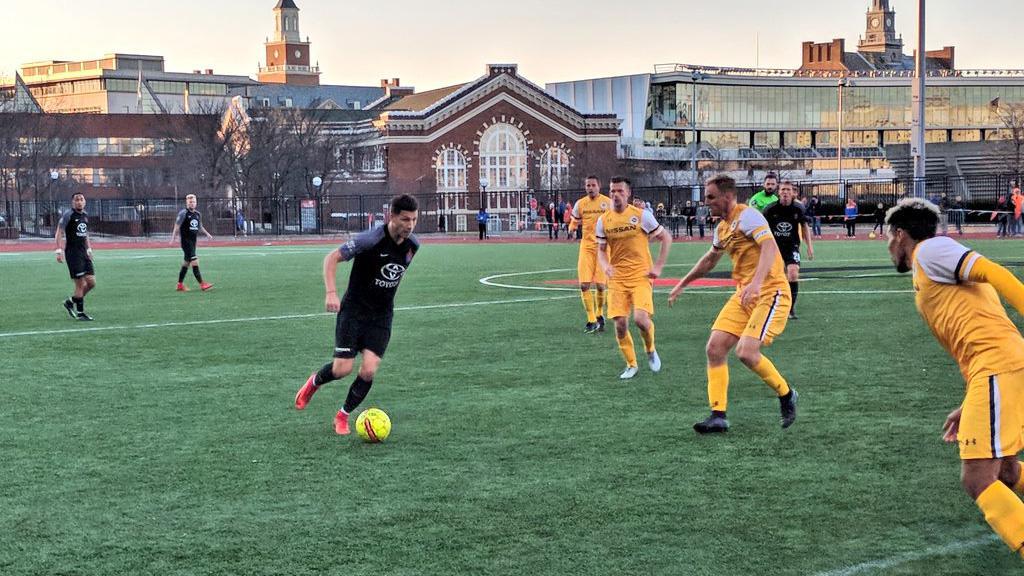 CINCINNATI – Honors ended even as Nashville SC’s Alan Winn scored from the penalty spot with two minutes to go to earn a 2-2 draw with FC Cincinnati in a preseason scrimmage at a sold-out Gettler Stadium on Saturday evening as both teams continued preparations for the upcoming USL regular season.

After a good start to the game Nashville had almost taken the lead in the 19th minute when an effort by Michael Cox came back off the crossbar and was cleared by FCC defender Forrest Lasso, but two minutes later the visitors struck as Matt LaGrassa fired home a left-footed shot from just outside the penalty area.

Cincinnati goalkeeper Spencer Richey had to turn aside another pair of chances for Nashville in the first half, but with almost the final act of the half the hosts got back on level terms. Lance Laing provided the goal for FCC with a shot from 25 yards that tucked just inside the right post to leave the game even.

Both teams had chances to take the lead early in the second half, with Nashville goalkeeper Matt Pickens making a pair of saves to deny the hosts, but FCC scored in the 65th minute as Emery Welshman scored his first goal for the club with a low finish off a throw-in.

Nashville earned a draw in the final five minutes, though, as Robin Shroot earned a penalty kick that allowed Winn to step up and convert. The goal was the former PDL Top Prospect’s team-leading third this preseason.

While the teams won’t meet in the USL regular season until July 7, both coaches believed the contest gave their sides a proper taste of what to expect when the season kicks off in two weeks.

“I think [the game was] exactly what we needed it to be,” said FCC Head Coach Alan Koch. “To be completely honest I’m glad we didn’t win because if we would have left the pitch today winning I think some people, some players and some fans would have left today with a full sense of confidence. That’s exactly what a USL game will look like.”

“I’ve always thought this was going to be our toughest game,” added Nashville Head Coach Gary Smith. “It was our first match on a turf field, against an Eastern rival, full squad. We took a moment or two to adapt to the field. Once we got to grips with the surface, I thought we absolutely dominated the first half. Cox had a great chance that he smashed off the crossbar. Tucker had some good chances as well after the goal. I thought we controlled the first 45.”