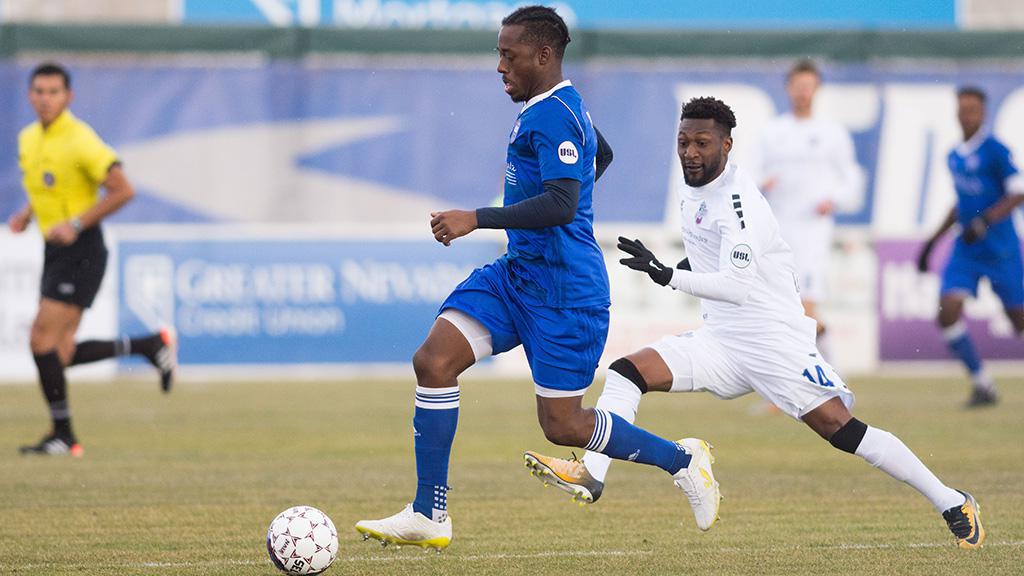 The Switchbacks took the lead from the penalty spot in just the sixth minute when a sweeping counterattack found Saeed Robinson on the left, and the midfielder slipped A.J. Ajeakwa into the penalty area where he was brought down. Jordan Burt converted with a powerful shot to the left corner.

Reno almost answered seven minutes later when a clever piece of interplay between Christian Thierjung and Antoine Hoppenot released Jerry van Ewijk into the penalty area, but Switchbacks goalkeeper Steward Ceus saved at the right post on the Dutchman’s low shot. Hoppenot and Brian Brown both went close soon after, with Ceus making an initial save on Hoppenot before Brown’s rebound attempt was cleared off the goal line by Jamal Jack.

1868 FC continued to press, and Hoppenot fired off the outside of the left post from inside the penalty area in the 21st minute. Ceus was then called into action again five minutes later when Hoppenot set up Brown for a low shot to the right corner that the Haitian goalkeeper got down well to save. Van Ewijk also fired a good effort from the edge of the penalty area that Ceus tipped over the crossbar 12 minutes later, but the Switchbacks held their lead into the halftime break.

Neither side was able to create any clear chances early in the second half, and it took until 16 minutes to go when Reno got another chance to equalize only for Taeseong Kim to track back and block a good chance for Hoppenot as he broke in behind the Switchbacks defense. Colorado Springs’ Verneri Valimaa also fired over shortly after coming on as a substitute, while Reno’s Danny Musovski shot just wide of the right post from the top of the penalty area with two minutes to go, but the Switchbacks held firm to take the preseason victory.