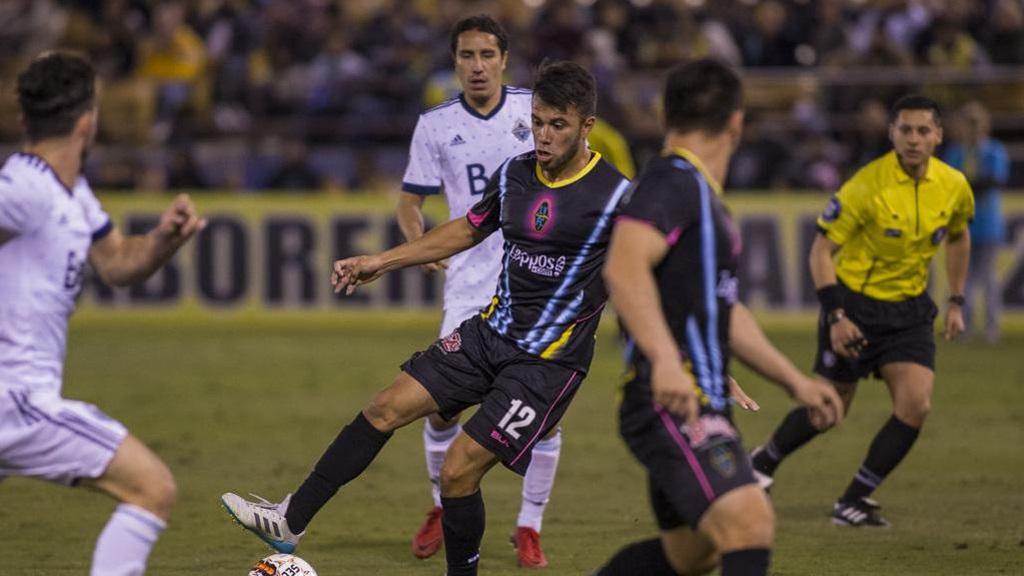 LAS VEGAS – Building an expansion team can be a difficult thing for both players and head coaches, so having familiar faces that understand the overarching goals of a coach's philosophy can be important for the entire squad. In the case of Las Vegas Lights FC midfielder Carlos Alvarez, his reunion with El Chelis has proven to be beneficial to both.

“Chelí was the man who gave me an opportunity to become a professional, he drafted me in 2013, so just playing under him again is something I really appreciate. He gave me another opportunity to come be with his team,” said Alvarez in an interview for the club website. “I just loved the intensity. He wants the kind of soccer that he wants, which has worked and can work again. The team just has to buy into it. Three months ago, there was no team here. Now, there’s a team that’s coming together quickly. We played some MLS teams, got better and better and better, but we need to learn from our mistakes we made and just keep growing.”

Alvarez was selected with the No. 2 pick of the 2013 MLS SuperDraft when El Chelis was at the helm of Chivas USA, with the former University of Connecticut scoring two goals and notching three assists in 29 appearances in his rookie season for the club. Now 27 years old, Alvarez’s experience will be phenomenally helpful for Lights FC, not just his familiarity with Chelis’ style, but also his experience playing with a first-year team. Alvarez was the first signing in club history for San Antonio FC two years ago, and so is familiar with playing on a brand new side.

“It was like this in San Antonio, it was a brand new team, and I was the first signing. I know what it takes, I’ve been through it with another club and that’s something I can bring to this team,” said Alvarez. “I have been through it and can show these guys the ropes in this league. It’s going to take some time, but at the end of the day, if you have the right guys and bring it together, you’ll be fine. And we’ll be fine.”

VAN OEKEL SETTLING INTO ENERGY FC: Having arrived last month with OKC Energy FC, experienced goalkeeper Matt Van Oekel is enjoying getting settled into the club and his new town, and settling into a new role as the oldest player in the squad for the first time. He was attracted to OKC by new Head Coach Steve Cooke, whose vision for direction he wanted to take the club spoke volumes to the former Real Salt Lake goalkeeper.

“When I spoke to Steve Cooke on the phone for the first time he really sold me on the club, front office and the overall organization.  He first reached out to me in the offseason and really made me feel wanted and that was enough for me choose Oklahoma City,” said Van Oekel in an interview with the club website. “We are still getting used to Oklahoma, trying to find different activities to do with the family but we very excited for this new opportunity.”

As a goalkeeper, Van Oekel finds his role on the team pretty simple, but with his experience, it has become a little more complicated than just keeping clean sheets as he seeks winning trophies with Energy FC.

“My role is simple, it’s keeping the ball out of the back of the net,” said Van Oekel. “Also, being a leader on and off the field for a lot of the younger players. Being the oldest guy here, hopefully I can steer them in the right direction and make sure we have a successful season.”

BURKE, STEEL FC READY FOR 2018: After signing a contract extension last month, Bethlehem Steel FC Head Coach Brendan Burke has felt vindicated in the progress he and the club have made over their first two seasons, but with that deal done the young Head Coach is now ready to focus on a strong 2018 season as Steel FC looks to reach the USL Cup Playoffs for a second consecutive season.

“It’s reassuring to know that you’re meeting expectations of the people above you,” said Burke to The Morning Call. “That’s a rewarding feeling. The project is a difficult one, but at least we’re meeting the expectations of the people that matter, the key decision-makers. That’s any coach’s concern when they take on a project – longevity and consistency, not just for themselves, but for their families. To have this consistency and being able to focus on my job is a freeing feeling.”

For Burke, this offseason's recruitment has been about strengthening the team after losing two notable young stars, Cory Burke and Matt Real, to MLS partner the Philadelphia Union. Burke has pursued a similar pattern, bringing young standouts from Major League Soccer – most notably 2016 USL Rookie of the Year Brandon Allen, formerly of the New York Red Bulls – into the side and developing them into key members of an attacking Bethlehem team.

“In the offseason, we try to identify the players in our own academy who we think have a chance to work their way through and making them a more full-time part of our system,” said Burke. “Identify them from outside and identify from inside, but either way you look at it: stay young.”