Riverhounds SC Pulls Away from Zips 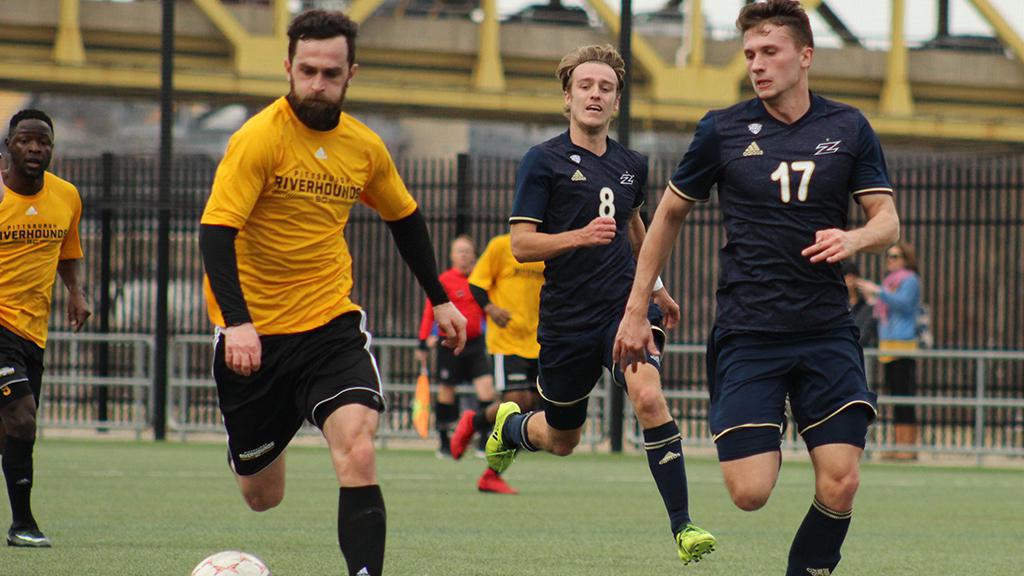 PITTSBURGH – Dennis Chin scored his first goal for Pittsburgh Riverhounds SC, while Joe Holland scored an outstanding late free kick as the hosts took a 4-2 victory against Akron University in a high-scoring preseason outing at Highmark Stadium on Sunday afternoon.

The Hounds notched two goals apiece in each half, with Kevin Kerr and Romeo Parkes supplying the firepower in the first 45 minutes before Chin and Holland allowed Pittsburgh to pull away from the Zips in the second half.

Action picked up in the final 15 minutes of the first half as the visitors took the lead in the 32nd minute, but Pittsburgh responded quickly by scoring two goals in only four minutes to take the lead.

Kerr leveled in the 37th minute as he was sprung on a breakaway by forward Neco Brett and after being denied on his initial shot put away the rebound, flicking the ball over the Akron goalkeeper’s head. Brett also played a role as Parkes put the Hounds ahead, working a give-and-go that allowed Parkes to fire home from near the penalty spot.

Pittsburgh’s lead proved to be short-lived, though, as Akron tied the game in the 42nd minute to send the teams to the halftime break deadlocked.

The Hounds picked things up considerably in the second half, holding more possession that led to more pressure in the Zips end. That eventually led to what would prove to be the game-winning goal in the 62nd minute as a corner deflected to Nick Groenewold, who was able to push the ball past the goalkeeper and across the box to Chin, who wasted no time cashing in on the open net.

Holland then ended proceedings with the best goal of the game as he rapped home a free kick from 25 yards into the top-left corner of the net, the shot caroming in off the inside of the post and into the net.

The Hounds continued their preseason schedule next week as the side hits the road for the first time, heading across the city to play the University of Pittsburgh at 7 p.m. on March 2 at Ambrose Urbanic Field.