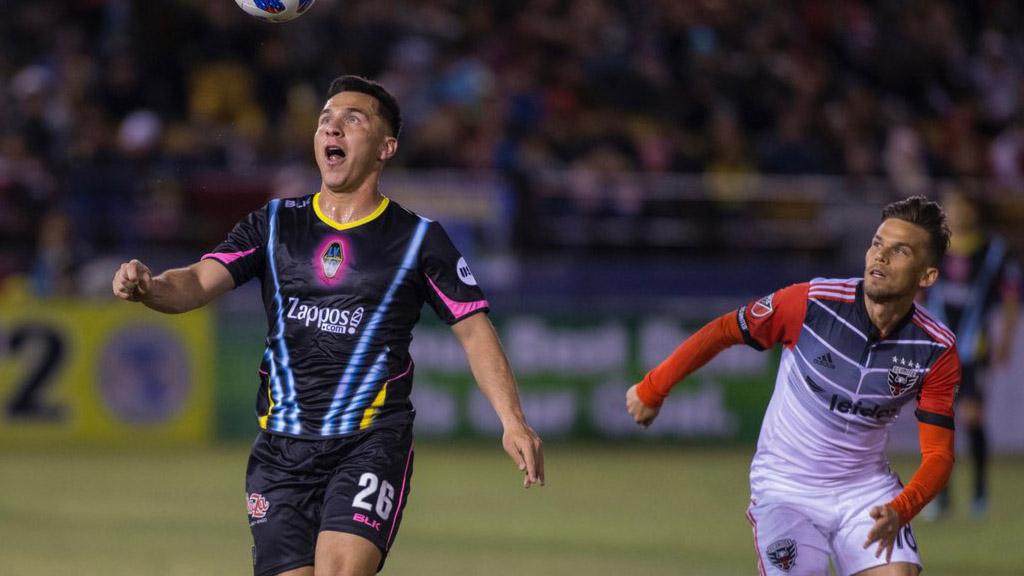 LAS VEGAS – Juan Calderon scored his third goal of the preseason, and Freddy Adu had an assist in his first appearance of 2018, but Las Vegas Lights FC fell 4-2 to D.C. United as U.S. Men’s National Team winger Paul Arriola notched three assists in the final game of Soccer Spring Training before another robust crowd of 7,158 fans at Cashman Field on Saturday night.

United went close to an opening goal in the seventh minute as a back-post cross from a free kick on the right found Steven Birnbaum, but the center back’s header shaved the front of the right post and went wide. Las Vegas’ first good chance also came from a set piece in the 29th minute as a deep corner from the left by Isaac Diaz was headed just wide by Joel Huiqui.

Lights FC got a big chance to take the lead in the 38th minute as a poor defensive header fell to Calderon, but the midfielder was unable to control his first-time volley and blazed over the crossbar, but it was D.C. that struck just before halftime as Arriola got in behind the defense and picked up a square cross to Yamil Asad for a first-time finish.

Las Vegas almost responded in the final minute of the first half as a passing move came to Marcelo Alatorre, but his curling finish from 20 yards was comfortably saved. Six minutes into the second half, however, D.C. sprang forward after a turnover in midfield with a two-on-one, and Arriola’s pass set up Darren Mattocks for United’s second.

Lights FC was almost immediately awarded a penalty kick as Birnbaum handled in the penalty area. Calderon stepped up and fired into the left corner for his third goal in Las Vegas’ last two preseason outings. Mattocks almost restored the two-goal lead just past the hour-mark but sent his finish from the left side of the penalty area wide of the right post.

D.C. wrapped up the victory with 10 minutes to go on a near-replica of its opening goal, as Ian Harkes was the recipient of a crisp pass by Arriola, who picked up his third assist of the night. Lights FC hit back with three minutes to go as Miguel Angel Garduno put home a near-post cross by Adu from the left to enliven the crowd.

Adu then almost leveled in the final minute as a loose ball fell to the top of the penalty area off a long throw-in, only for his first-time shot to dip just over the crossbar, but in stoppage time a poor clearance fell to Luciano Acosta to wrap up the scoring and ensure victory for United.