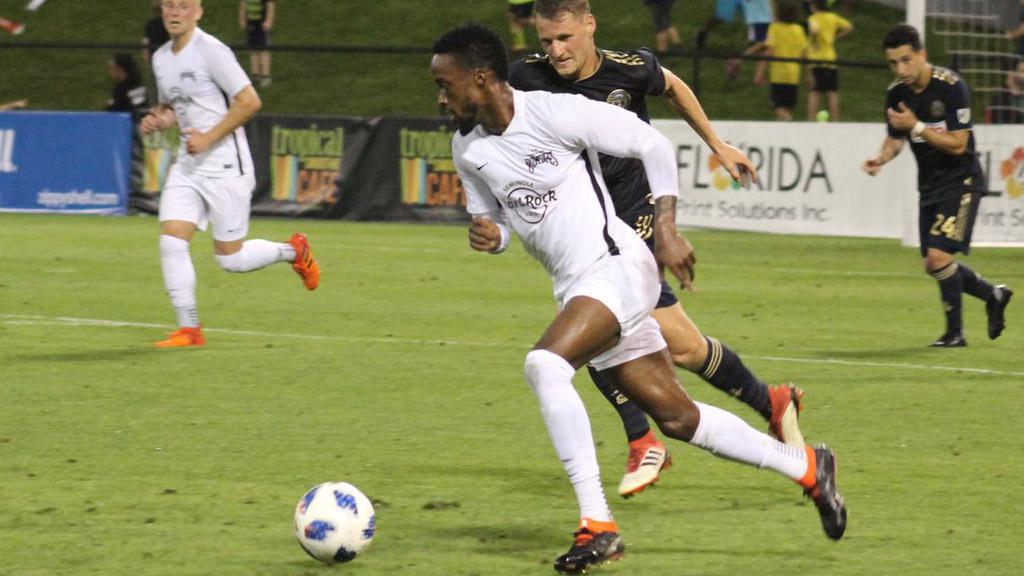 ST. PETERSBURG, Fla. – The Tampa Bay Rowdies claimed their first win of the preseason as first-half goals by Jochen Graf and Michael Nanchoff led to a 2-1 victory against the Philadelphia Union in the final game of the 2018 Suncoast Classic at Al Lang Stadium.

The Union had the first good chance at goal in the 11th minute when Marcus Epps cut in from the left wing and curled a shot to the far post that just went wide, but the Rowdies took the lead in the 19th minute as a swift counterattack sent Graf in on goal, and his clipped finish picked out the right corner despite Union goalkeeper Andre Blake’s effort to close down the angle.

Graf threatened again for the hosts eight minutes later as Zac Portillos found space on the left side to deliver a cross, but the Rowdies forward was put under enough pressure to sky his header. The Rowdies doubled their lead 10 minutes before halftime, however, as a break forward by David Najem opened a chance for Nanchoff’s low finish to the left corner.

Junior Flemmings almost got in on the act four minutes before halftime, only for his header back across goal to elude both Graf and the right corner of the net, sliding out for a goal kick. Graf almost took advantage of another breakaway early in the second half, Blake saving well after the Texas native had latched onto a ball over the top after a giveaway in midfield, and he went close again soon after, his header missing the target after a good cross by Nanchoff from the right.

The Union had a chance to cut into Tampa Bay’s lead in the 55th minute when Adam Najem found Epps for a low shot that was saved by Rowdies goalkeeper Cody Mizell, with Cory Burke missing out on the rebound, but just as soon after Graf threatened twice more. A good through-ball into the right side of the penalty area saw Graf’s ensuing shot to the opposite corner well-saved by Blake, and he then headed over from the corner kick after losing his marker at the back post.

Philadelphia began to press more in the final half-hour as numerous of its top players came on in a full lineup change, but former Union player Leo Fernandes almost added a third for the Rowdies on a counterattack in the 72nd minute, his low breakaway effort turned away by Blake’s kick-save. The Union’s David Accam also went close two minutes later, only for his finish to go just wide after good work by former Rowdies player Fafa Picault.

The Union pulled a goal back with six minutes to go as Bosnia and Herzegovina international Haris Medunjanin scored on a brilliant free kick from 25 yards that clipped the top-left of the post and went in. The visitors then pressed for an equalizer, and forced a pair of solid saves by Mizell, but the Rowdies held on over the final five minutes to claim the victory.