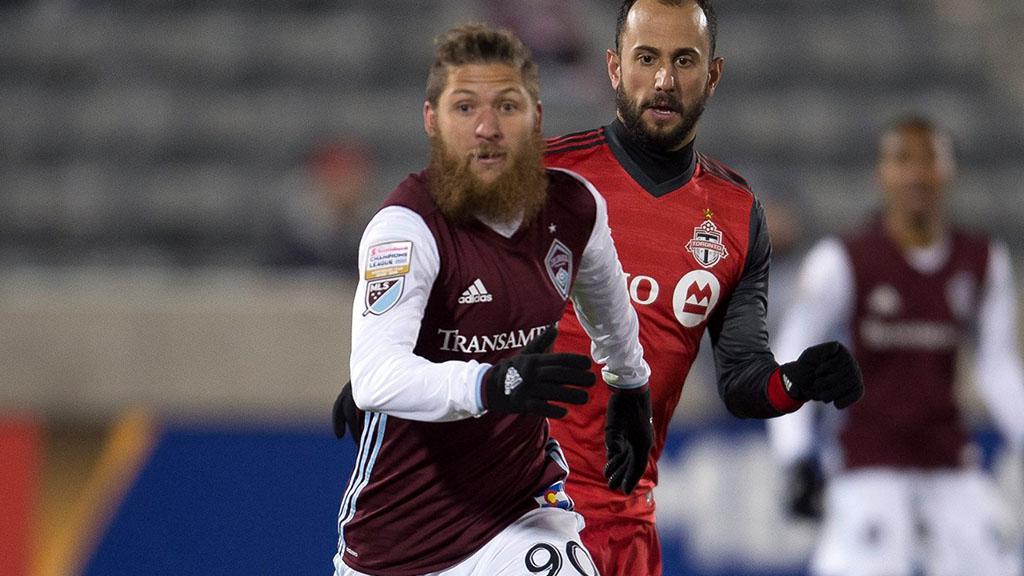 DENVER – While there has been numerous players to stand out in the USL in recent years, few have had the impact of former Charlotte Independence midfielder Enzo Martinez. Selected to the USL All-League First Team for the past two seasons, Martinez was also nominated twice for USL Most Valuable Player as he led the Independence to back-to-back berths in the USL Cup Playoffs.

That consistency recently saw Martinez get his reward as on Monday he was unveiled as the newest member of the Independence's MLS partner, the Colorado Rapids, and his new club took little time in getting Martinez into the action. Just one day after officially signing with the Rapids, the attacking midfielder was in the Starting 11 for Tuesday’s CONCACAF Champions League match against Toronto FC.

“I think every player in the world believes in themselves. If they don't, there's something wrong with them,” said Martinez before the contest. “Learning early on, there are things I can control and things I can't. The mindset, for me, was coming in here and doing everything I can and the rest would take care of itself.”

But there’s more to success than just believing in yourself, there’s something else that sets great players apart. The rise in Martinez's game in Charlotte, having previously been a first-round selection in the 2012 MLS SuperDraft by Real Salt Lake, provided an illustration of an environment that allowed the 27-year-old to thrive. It's something that Martinez points to as a positive in both Charlotte and Colorado.

“When I was in Charlotte, I felt like we had a family. Coming [to Colorado] it's the same thing. I've never seen a group of guys at the MLS level that welcomed everyone so much and makes everyone feel as a part of their family,” said Martinez. “It's been awesome to transition to here. I feel like I've known these guys for a lot longer than I have.”

HUNTER GORSKIE, MODEL: There was delight in St. Petersburg this week after Tampa Bay Rowdies defender Hunter Gorskie revealed his brief modeling career back in 2016. While playing for Polish club Miedz Leginca, Gorskie was on vacation in New York City visiting his older brother Jason, who was beginning to pursue a modeling career.

After meeting Jason’s director before heading to a weekend brunch, Jason got a call asking if the two could return to the studio for a test shoot to shop around to potential clients.

“My brother and I were just laughing about it, not expecting anything,” Hunter said in an interview with the club website. “Later that same day, my brother and I were telling the story to some of our friends when he got a call from the director who said, ‘You guys booked a job. You’re going to L.A. on Wednesday.’ It was my brother’s first paid gig in the modeling industry and it was both of us together. Four days later, we’re in Los Angeles with the Hollywood sign in the background doing a shoot for Saks Fifth Avenue. It was a ton of fun and it was a really memorable trip for the both of us.”

The decision to take the photo shoot reflects Gorskie’s nature to take risks and take on challenges, leading to the launch of a lifestyle brand founded with his brother, Don’t Miss Don’t Matter. That nature was also reflected in his play on Saturday when he ended up finishing the last 30 minutes of the Rowdies match against the Montreal Impact as a defensive midfielder.

“I have no problem stepping forward,” Gorskie said. “I actually love playing in the midfield. I’m very comfortable there.”

It turns out Gorskie is not the only model in the Rowdies' ranks with new signing Jack Blake keen to offer advice to Gorskie from his own experiences.

DAVID VAUDREUIL, WORLD TRAVELER: The offseason is often a time for travel for players and coaches, but for Tulsa Roughnecks FC Head Coach David Vaudreuil his offseason traveling was more of a mission than a vacation.

“It was good, busy, I did a lot of traveling, California, Dallas, Mexico City, and I was in Guadelajara right after the season,” said Vaudreuil about his travels on the first episode of the Pop and Vaud show. “It was mostly looking at players and keeping the web, tickling the network looking at players and talking to MLS teams about potential loans.”

Making all those trips was vital to building the Roughnecks FC squad for the 2018 season as Tulsa attempts to build on its first USL Cup Playoffs appearance. After losing talented players like Modou Jadama – who made the step up to Major League Soccer with the Portland Timbers – in the offseason, Vaudreuil had one key focus in his recruitment.

“Number one was experience, we’re always harping about defense and that we’re going to have a low goals against. But when push came to shove that was our Achilles heel, especially on the road. We need to be deeper and have more experience,” said Vaudreuil. “Now you have [Ivan] Mirkovic who’s been captain of Saint Louis, captain of Sacramento and has been on top of the division a couple of times. Definitely on paper, not that it means anything now, we have to prove it, but we’re more talented and more experienced.”

LOCAL BOY READY FOR ATL UTD 2: With ATL UTD 2 joining the USL in 2018 there is opportunity for more players to follow their dreams and play for their hometown team. One of those following that dream is midfielder Kevin Barajas, who was recently unveiled as one of the expansion club's latest signings.

Barajas is not unknown to his new Head Coach Scott Donnelly, who crossed paths with the youngster when he was playing at Atlanta area High School Mt. Paran while coaching the U.S. U18 Men’s National Team.

“There’s some level of serendipity now that he’s with the club,” Donnelly said to the Gwinnett Daily Post. “He’s a guy our academy know really well … So when I came in and started to fill the roster, he was a natural fit for the club.”

While Barajas was a natural fit for the club his performances on trial with the club certainly helped as he scored a goal and added a handful of assists. For Barajas playing professional soccer alone was a dream, but doing so in his hometown took it even further.

“I thought that’d be great, in the hometown and everything,” Barajas said. “Ever since Atlanta United started, I thought that would be a great opportunity to come back and play. The fact that that is able to become a reality is amazing.”

As the team is coming together for ATL UTD 2’s inaugural season Barajas will be a vital part of the team, and in being a local product he's in an ideal position to bring his passion to the expansion side, and help the team get settled.

“Before practice, the guys were like, ‘When are you going to take us out to see the town?’” Barajas said. “The next time we have a day off, we can definitely see Atlanta a little bit.”