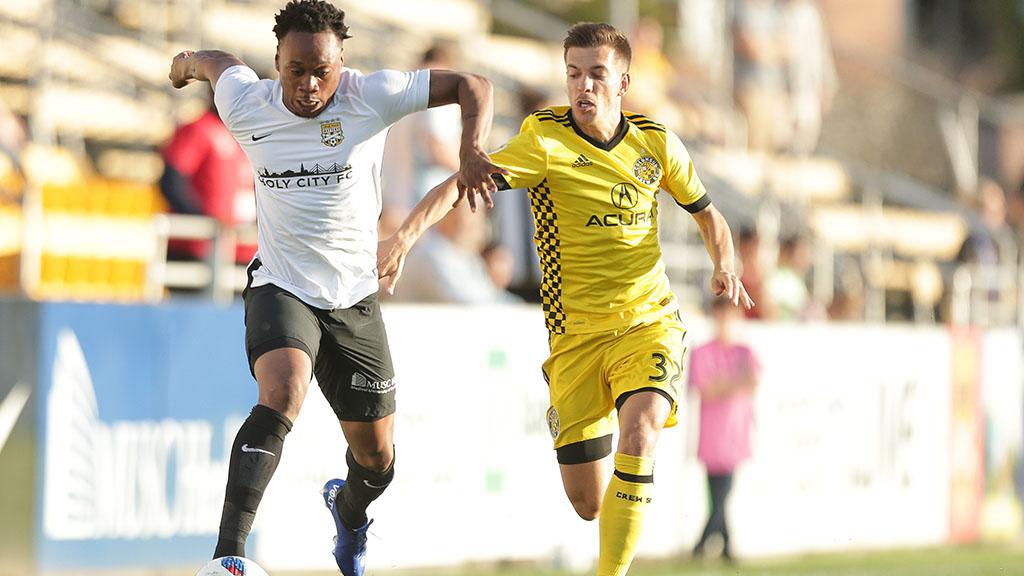 CHARLESTON, S.C. – The Charleston Battery held a halftime lead behind Ian Svantesson’s second goal in as many games, but it wasn’t enough as Columbus Crew SC rallied to take a 2-1 victory behind two goals by U.S Men’s National Team forward Gyasi Zardes on the second matchday of the 2018 Carolina Challenge Cup at MUSC Health Stadium on Wednesday night.

Both teams started brightly, and each had the chance to take the lead in the opening 15 minutes. The Battery almost took the lead in the fifth minute when Ataulla Guerra’s shot was deflected just wide of the right post off a low cross by Quinton Griffith, while the Crew SC duo of Cristian Martinez and Pedro Santos both threatened in the attacking third.

The Battery broke the deadlock in the 32nd minute, however, when Tah Brian Anunga stole possession in Columbus’ half and quickly slid a through-ball for Svantesson. The 6-foot-6 striker collected Anunga’s pass and calmly finished into the right side of the net past U.S. Men’s National Team goalkeeper Zack Steffen to put the home side in front.

“It feels like we’re clicking more and more each game,” said Svantesson. “We’re getting more familiar with each other as we work our way through preseason. Tah and I made eye contact and he played a perfect ball through to me and I was able to slot it past the goalkeeper.”

Both teams made multiple changes at halftime, and Columbus' second lineup found an equalizer 11 minutes into the second half. A good cross from the right side by Edward Opoku swung into the near post, and Zardes’ flicked header found the left corner of the net past Battery goalkeeper Odisnel Cooper to equalize.

Crew SC then took the lead with eight minutes to go as Zardes produced a similar finish off a delivery by Harrison Afful as the Ghanaian’s floated cross found the former LA Galaxy striker for another good header to put Columbus ahead.

The defending Challenge Cup champion, Columbus is now in position to claim the title for a third time in the tournament’s history after having taken victory in its first two games of the tournament. Columbus wraps up the event on Saturday night as it faces Minnesota United FC needing only a draw to finish top of the round-robin standings.