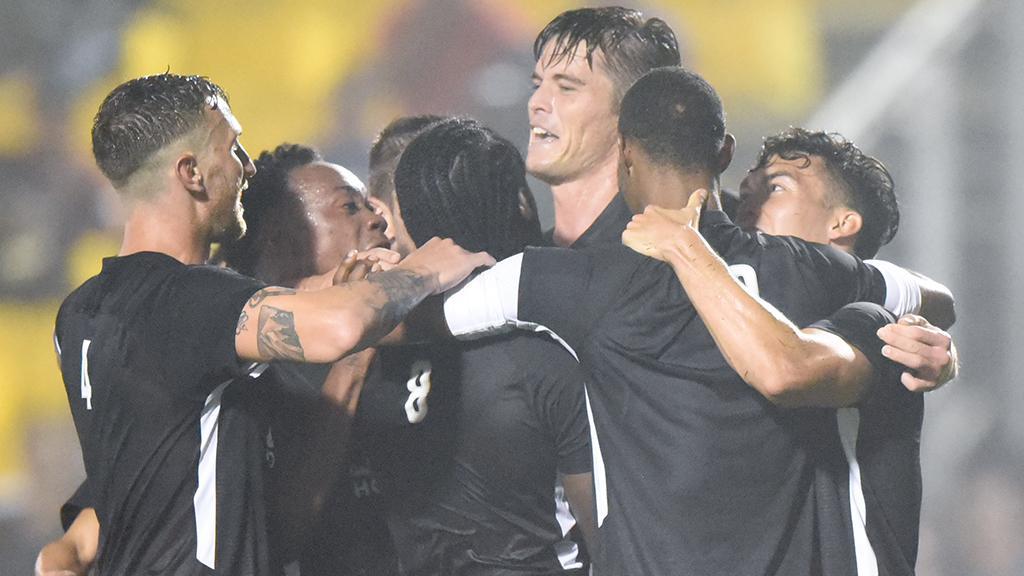 One of the unique things about the USL preseason, certainly compared to Major League Soccer, is the staggered nature we see to preseason preparations. With a month to go before the season, some teams have yet to officially open their preseason slates – our first impression of what looks like a solid Indy Eleven team might not arrive until Thursday when it scrimmages against FC Cincinnati – so there’s a level of intrigue as to what’s going on around the league. That said, here are some thoughts on what we’ve seen in the past week.

1. NEW SCHOOL ARRIVAL: It’s not completely true to call what the Charleston Battery’s offseason looked like the start of a new era. The experience of players like defender Taylor Mueller and goalkeeper Odisnel Cooper, both in the top 10 in appearances for the historic club, means there is a foundation in place, but after the departure of a number of players we have known as Battery stalwarts this offseason, it made the club’s 1-0 win against Minnesota United FC on Saturday to open the Carolina Challenge Cup all the more interesting. The returning veterans, which also include Ataulla Guerra, played their role, but it was the likes of Nico Rittmeyer and Kotaro Higashi who really turned heads on Saturday night. The progression of Higashi in particular, who made 23 starts last year after signing late in preseason, should get close attention the remainder of the CCC as he gets a much bigger spotlight after the departure of Justin Portillo.

2. MIDWEEK SHOWDOWN: It’s understandable given the quality of competition the Battery have attracted to one of the marquee preseason tournaments in the United States that the hosts have never lifted the trophy at the end of the week. While the goal for Head Coach Mike Anhaeuser during the tournament is to evaluate his squad, Wednesday’s game with fellow opening-night winner Columbus Crew SC is one that would leave a winner in prime position to take the crown, a small piece of history that would be a nice feather in the veteran coach’s cap. “When you’re in a group of four and you get a win in your first game, it puts you in a good position for the rest of the tournament,” said Anhaeuser after Saturday’s win. “We’ve never won Challenge Cup before, so this is an exciting win that sets us up to potentially do something special this week.” It’s preseason, yes, but when a prize is on the line, it fuels those competitive fires just a little bit more.

3. EVER READY: One of the things that caught the eye of San Antonio FC’s Ever Guzman after his late-season arrival in 2017 was how sharply he took chances when they arrived. While it was a limited look, his five goals in 11 games at a club-best rate of a goal every 153.2 minutes gave SAFC’s attack a reliable centerpiece down the stretch as it finished second in the Western Conference last fall. On Saturday against the New England Revolution, the 29-year-old Mexican was at it again with two confident finishes that earned the USL side a 3-3 draw, coming back from a two-goal halftime deficit. Guzman rode the Revs’ defensive line well in both instances, which led to composed finishes as he drifted into the right space at the right time and were a nice fillip for the side as it headed home from its short trip to Arizona.

4. LIGHT IT UP: There was a lot to take away from Las Vegas Lights FC’s second game of the preseason – notably Juan Jose Calderon etching his name into the club’s record book as its first official goal-scorer with a pair of goals that drew the side level before it eventually succumbed 3-2 to Vancouver Whitecaps FC before another healthy crowd of 6,049 at Cashman Field – but the spirit that owner and CEO Brett Lashbrook hoped to instill through the hiring of El Chelis to lead the team on the field came to the fore following his dismissal from the sideline during the second half. Officially, smoking at Cashman Field is limited to a designated area away from the stands, but true to his personality, Chelis promptly jumped into the stands, sparked up and took in the rest of the game, occasionally barking instructions to his bench. Whatever comes of this season for Lights FC, moments like this are a sign it’s rarely going to be dull.

5. RAISING THEM RIGHT: Sacramento Republic FC announced it would launch its own Academy program almost three years ago, and last Thursday night in amongst some nice performances by some of the club’s senior newcomers like goal-scorer Christian Eisselle against Seattle Sounders FC, the fruits of the labor put forth in those efforts was also on display at Papa Murphy’s Park. Sacramento has already started placing players on U.S. Youth National Teams – including Under-18 international Roberto Hategan, who became the club’s first pro signing from the academy last year. The composure players, like Quincy Butler, showed against veteran opposition was enjoyable to see for a club that has put a strong structure together from top to bottom. This weekend’s game with Los Angeles FC will provide another chance for the club’s young players, as they’ll look to grasp the opportunity strongly.

6. RIGHT ACTION: The Tampa Bay Rowdies ended up on the short end of a 2-1 defeat to the Montreal Impact on Saturday night at the Suncoast Invitational at Al Lang Stadium, but as in their prior outing against FC Cincinnati, there was a lot to like from the team’s display, particularly a rollicking second half that saw the hosts put their MLS opponents on their heels regularly. For around a 20-minute spell, Tampa Bay created plenty of chances, highlighted by a Junior Flemmings finish that was cleared off the line and a penalty kick by Georgi Hristov that was saved by Impact goalkeeper Evan Bush. The pressure eventually paid off with 15 minutes to go, as Jochen Graf notched his first goal for the club, at which point it looked possible the hosts would go on to earn victory, only for the Impact to quickly take advantage of a defensive lapse to allow Nacho Piatti an opportunity he took well for the winner. As it stands, though, there have been far more positives for the Rowdies than negatives, results notwithstanding.

7. UPS AND DOWNS: It can, of course, be a fool’s errand to look too deeply into results at this point of the preseason. Case in point, the two scrimmages Saint Louis FC engaged in over its 12-day trip to Florida, which saw the side first take an 8-2 victory against Eastern Florida State College and then a 1-1 draw with Florida International University. Christian Volesky scored for STLFC against the Panthers on Sunday before a late equalizer in the 120-minute scrimmage brought FIU level. Given the workload the players were under to build fitness, as they have been around other training camps so far, there shouldn’t be too much concern a month away from the regular season. “We will now focus on managing their training load accordingly to make sure they are fresh for the games,” said STLFC Head Coach Anthony Pulis after Sunday’s scrimmage. “Their minutes will now increase the closer we get to Rio Grande Valley on March 16.”

8. ENERGY BOOST: One team that clicked in attack this weekend was OKC Energy FC, as Miguel Gonzalez and Jose Barril both notched two-goal performances in a victory against Southern Methodist University on the campus of the University of Oklahoma ahead of its preseason trip to IMG Academy this week. Gonzalez’s opening goal was a particularly fine one, a perfect volley into the top-right corner that showed off the technique that has made him a highly-regarded player in the league. Gonzalez had a solid first year in OKC last season with eight goals, but if he can parlay a good preseason into double-digit goals in the regular season for the second time in his career, it would boost Energy FC greatly in a highly-competitive Western Conference.

9. FIRED UP: The eight-goal performance by Saint Louis wasn’t the only big scoring outing we’ve seen from a USL club so far this preseason, with Bethlehem Steel FC putting up double-digits in its victory on Saturday against a Junior Lone Star side that was a regional qualifier for last year’s Lamar Hunt U.S. Open Cup. What might have been most notable about Steel FC’s display was the variety of scorers, with four different players each notching two goals apiece, and none of them being forward Brandon Allen. One who did was 2017 USL Rookie of the Year finalist Santi Moar, while Philadelphia Union Academy players Brendan Aaronson and Issa Rayyan also got in on the action. There’s a long way to go, but after the departure of Seku Conneh this offseason and move up by Cory Burke to the Union’s squad – the Jamaican notably notching his fourth goal of MLS preseason on Saturday – that Steel FC is finding the net consistently early in preseason is a good sign.

10. SHAKE OFF THE RUST: Steel FC’s next preseason opponent could offer a better barometer of where the club stands, but with fellow USL Eastern Conference side Penn FC also looking to shape its future after a busy offseason arguably a bigger spotlight will be trained on the side the new Head Coach Raoul Voss is putting together. Penn took a 2-1 victory against LIU Brooklyn on Friday night in its preseason opener as Pedro Galvão and Aaron Dennis – a former PDL standout for the Ocean City Nor’easters – found the net, but there was plenty of rust to be shook off for what will be a very new-look squad this season. “You could tell that it was a little rusty in the beginning and we had to find our rhythm,” said Voss. “It is going to take some time to figure out exactly how we want to play, but overall, I am very happy with the performance.” Wednesday’s game against Steel FC will be one to monitor.

11. UNLEASHING THE NEW ERA: Pittsburgh Riverhounds SC saw action again this past weekend, taking a 1-0 win against St. Bonaventure University on Sunday afternoon, but the big event of President’s Day weekend arrived on Friday night as the club unveiled its new crest and uniforms, kicking off a new era for the team. It’s been a big offseason for the Riverhounds, with Friday night’s event encapsulating the sense of a new energy around Highmark Stadium that has coincided with the arrival of Bob Lilley as Head Coach, and an optimism that the club’s best days are just around the corner.