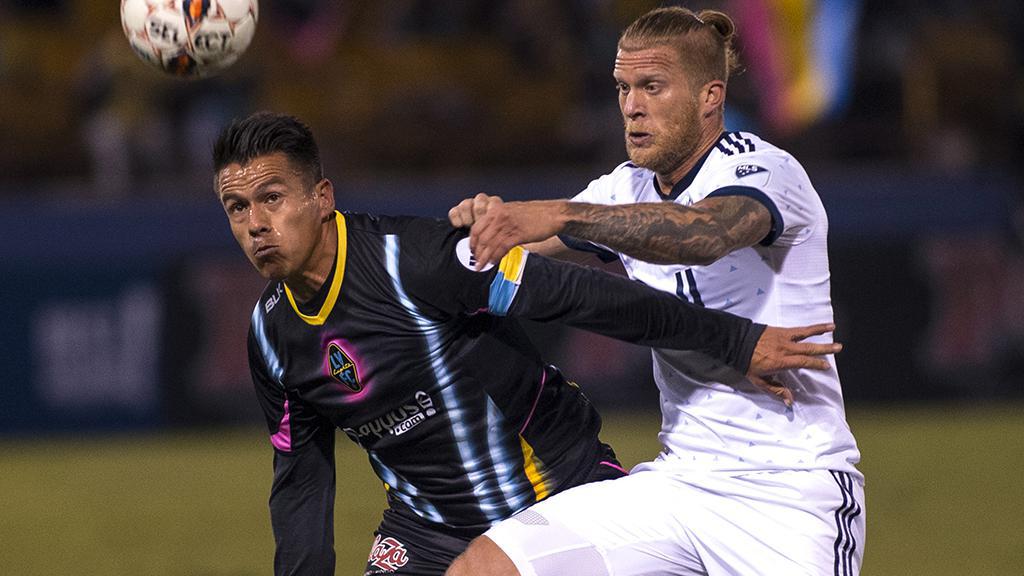 LAS VEGAS – Juan Jose Calderon scored the first two goals in Las Vegas Lights FC’s history, but Vancouver Whitecaps FC emerged with a 3-2 victory in front of a crowd of 6,049 fans in a preseason clash between the sides at Cashman Field on Saturday night.

Vancouver took the lead in the 13th minute as Cristian Techera split the Lights’ defense and kept his composure to chip home a finish past goalkeeper Angel Alvarez from 14 yards out. Five minutes later the ‘Caps doubled their lead as Alphonso Davies scored on a spectacular individual effort that saw him carry a counterattack from Vancouver’s end to a low finish past Alvarez.

Las Vegas linked up more consistently in midfield despite going behind early, though, and Carlos Alvarez found space for a shot from 25 yards that was deflected away for a corner. The Lights were reduced to 10 men just before the hour-mark as Marcelo Alatorre was dismissed, but in the 65th minute the side pulled a goal back as Calderon curled home a free kick into the right corner of the net.

The Lights then quickly got on level terms through Calderon’s second of the night as a foul in the penalty area saw the referee point to the spot. Calderon stepped up and sent Vancouver goalkeeper Stefan Marinovic the wrong way with his finish to the right corner.

The ‘Caps almost regained the lead with 18 minutes to go as a free kick by Techera took a deflection and had to be turned away from the top-left corner of the net by Alvarez, but the visitors were awarded a penalty kick of their own three minutes later as Las Vegas’ Joel Huiqui was called for a handball in his own penalty area. Kei Kamara converted, sending Alvarez the wrong way with his finish to the left corner.

Las Vegas almost pulled level again soon after as a back-post corner from the right found Bryan de la Fuente, only for his finish to be comfortably saved by Marinovic, but the ‘Caps held on to earn victory as Las Vegas took another step toward its inaugural regular season.