Rowdies Battle, But Fall to Montreal 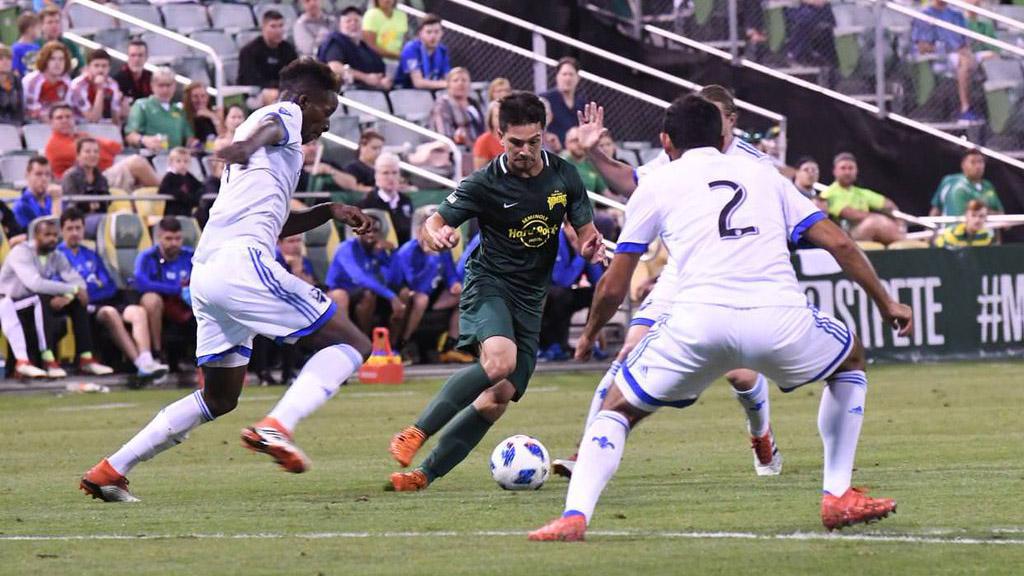 ST. PETERSBURG, Fla. – Jochen Graf scored the Tampa Bay Rowdies’ first goal of the preseason, but a late tally by Nacho Piatti earned the Montreal Impact a 2-1 victory after an entertaining second half that also saw Impact goalkeeper Evan Bush save a penalty kick at the Suncoast Invitational at Al Lang Stadium on Saturday night.

The Rowdies tried to probe in behind the Montreal defense regularly in the opening 15 minutes, but the Impact had the first good look on goal only for Matteo Mancosu to sky his finish from inside the penalty area. The visitors threatened again as Saphir Taider got into the left side of the penalty area, but his shot was blocked over the crossbar as he was unable to get a clear look at goal.

Montreal took the lead a minute before halftime as a well-worked move created space down the left for Michael Petrasso, whose first-time cross found Taider perfectly for a close-range header.

Tampa Bay created the first good chance of the second half eight minutes in as a slipped pass by Junior Flemmings picked out Martin Vingaard on the break forward, but Vingaard’s shot went wide of the right post from the top of the penalty area.

The Rowdies then had a strong spell of pressure that saw Flemmings denied as his shot was cleared off the line by Petrasso. The rebound was gathered by Michael Nanchoff just inside the penalty area, and he was brought down for a penalty kick, but Georgi Hristov’s shot to the right side was saved by Bush. Of the second of two ensuing corners Rowdies center back Hunter Gorskie headed just over.

Nanchoff went close again midway through the second half as his free kick from the top-left side of the penalty area went just wide of the near post, but with 15 minutes to go the Rowdies pulled level as Graf took a pass from Sebastian Guenzatti and lifted his finish past the advancing Bush into the right corner.

The level score was short-lived, though, as the Impact regained the lead almost immediately. Petrasso and Taider were again involved, and they set up Piatti for a calm finish into the right side of the net, and the Argentinean playmaker’s goal stood as the winner despite the Rowdies’ late push to even things up.