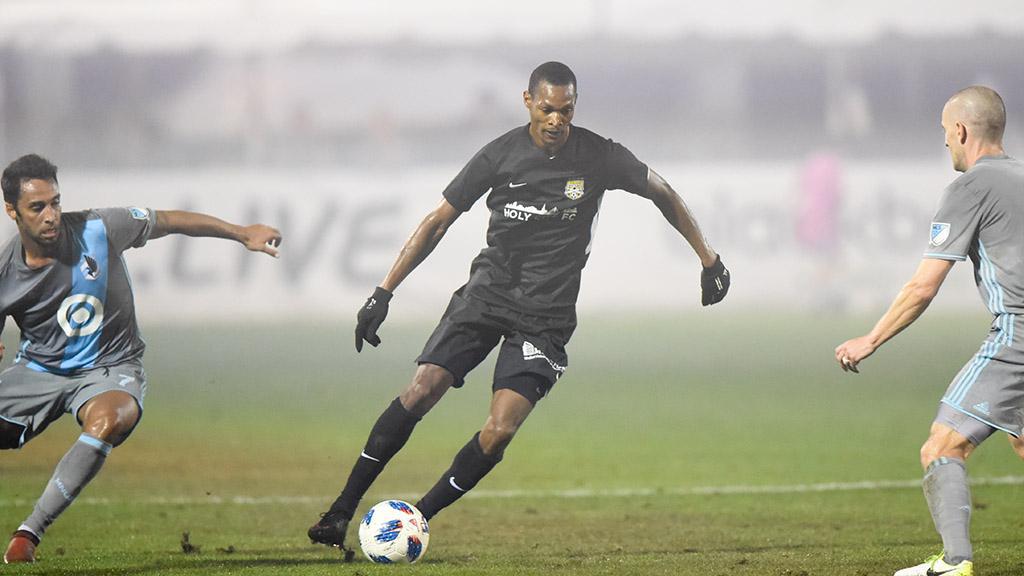 CHARLESTON, S.C. – A first-half goal by Ian Svantesson earned the Charleston Battery a 1-0 victory against Minnesota United FC on Saturday night at a sold-out opening day of the 2018 Carolina Challenge Cup at MUSC Health Stadium.

The Battery opened up the first good look at goal in the 21st minute as the side shifted play from the center and Ataulla Guerra to the right side of the penalty area with Nico Rittmeyer, who forced a low save by Minnesota goalkeeper Bobby Shuttleworth. Guerra also forced a save from Shuttleworth five minutes later from the top of the penalty area as the Battery jumped up to win possession in Minnesota’s half.

Charleston took the lead just before the halftime break, however, as a cross into the penalty area wasn’t dealt with cleanly by Minnesota’s defense, and a low shot by Neveal Hackshaw deflected off Svantesson in front of goal to wrong-foot Shuttleworth and find the right corner.

Minnesota started to apply more pressure in the second half but were unable to find a way to connect properly in the final third as the game entered the final 20 minutes. Charleston, meanwhile, almost found a second with 17 minutes to go as a cross from the left was almost directed home by a United defender, a goal-line clearance keeping the ball out.

Battery goalkeeper Odisnel Cooper was called into action a minute later as he got down to deny a strong, low volley by Frantz Pangop, but with seven minutes to go the Loons were reduced to 10 men as Collen Warner was sent off for his second yellow card as he ended a potential Battery breakaway at the halfway line. That proved the final key moment of the game, Minnesota’s late efforts to find an equalizer came up short as the Battery held on for the victory.

COLUMBUS CREW SC 3, ATLANTA UNITED 1: Columbus cruised to victory in the opening game of the CCC18 as it built a three-goal lead before Atlanta scored a late consolation.

Crew SC took the lead in the 13th minute as a pass by Federico Higuiain found Pedro Santos on the overlap as he drove into the penalty area unmarked, and the Portuguese midfielder made no mistake with his finish. Just past the half-hour mark Columbus doubled its lead as Cristian Martinez caught Atlanta goalkeeper Brad Guzan off his line for a perfect chipped finish from 35 yards, an advantage it held to the break.

Santos played a role in Columbus’ third goal, too, as his corner kick was deflected home for an own goal by Josef Martinez with 19 minutes to go. And while Atlanta pulled a goal back through Martinez in the 90th minute, it took little gloss off a solid opening victory for Crew SC.