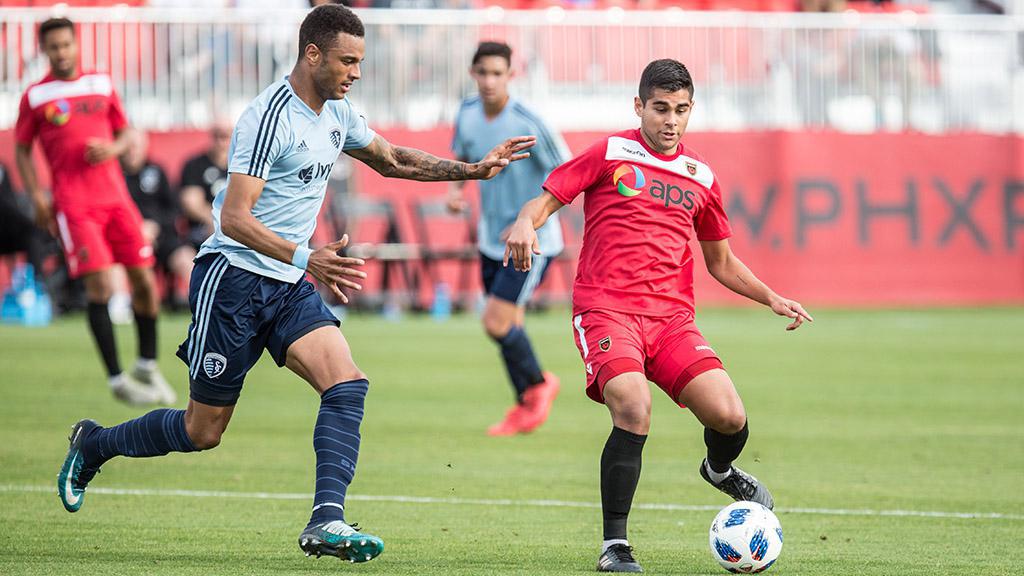 PHOENIX – Phoenix Rising FC took the lead for a second time this preseason against MLS opposition, but Sporting Kansas City rallied to earn a 2-1 victory before a crowd of 5,060 in the 2018 Mobile Mini Sun Cup at the Phoenix Rising Soccer Complex on Saturday afternoon as Ilie Sanchez and Daniel Salloi struck for the visitors.

Phoenix took the lead in just the fifth minute as a counterattack saw Devin Vega intercept a pass in his own half and quickly turn the play the other way before sliding Kevaughn Frater in behind the SKC defense. The Jamaican forward put home his finish confidently for his second goal of the preseason.

Sporting pressured effectively following the goal and it paid off in the 17th minute when Sanchez stepped in to claim possession inside Phoenix’s half and strode into the attacking third. The midfielder’s shot from the edge of the penalty area took a deflection, which saw it find the right corner of the net to level the score.

Phoenix went close to regaining the lead in the 29th minute as Chris Cortez found space outside the penalty area and rifled a shot just wide of the left post, but moments later SKC took the lead as a magical first touch by Roger Espinoza set up a short pass to Khiry Shelton inside the penalty area, and the former PDL standout set up Salloi for a clinical finish.

With a refreshed lineup for the second half, Rising FC saw its newcomers almost make an immediate impact as Jason Johnson’s chipped ball found Billy Forbes in the left side of the penalty area for a volleyed finish that went just wide of the left post. Didier Drobga also went close with a fierce volley that flashed over from 14 yards after another good cross by Johnson, and the former Ivory Coast international dipped a free kick wide of the near post with 12 minutes to go from just outside the left edge of the penalty area.

Both teams had chances late on, including one final free kick for Drogba in stoppage time from the top-right side of the penalty area, but after the effort deflected off the wall and slid wide of the left post the final whistle blew, allowing SKC to claim its victory.

SWOPE PARK RANGERS 2, TULSA ROUGHNECKS FC 2: Honors ended even as the Roughnecks rallied from a two-goal deficit to earn a draw against the Rangers at Children’s Mercy Victory Field on Saturday afternoon.

Swope Park went close to opening the scoring in the 36th minute when Chase Minter fired a volley off the crossbar from inside the penalty area, but three minutes later Matheus Silva curled home a perfect free kick from 30 yards to put the Rangers up at the break.

The teams exchanged penalty kicks around the hour-mark, as the Rangers’ Hadji Barry converted from the spot after having been brought down in the penalty area to give the hosts a two-goal lead in the 61st minute. The Roughnecks responded a minute later after a handball in the Rangers’ penalty area allowed Joaquin Rivas the chance to put home his finish from the spot. The Roughnecks then earned a draw with three minutes to go as a trialist cut in from the left side and picked out a low shot to level things up.

PENN FC 2, LIU BROOKLYN 1: Penn FC overcame a sluggish start as Pedro Galvão and Aaron Dennis scored either side of halftime to earn the hosts victory in their first preseason outing against the Blackbirds on Friday night.

The Blackbirds took the lead after only two minutes as a counterattack caught Penn’s defense napping. Penn quickly looked to get back into the game, and five minutes before halftime it was rewarded as a long ball forward found Galvão in the left side of the penalty area, and the Brazilian knocked home a first-time finish.

Penn gained the lead just before the hour-mark as recent signing Calvin Rezende found space in the penalty area, and delivered a pass that Dennis put away to give the hosts the lead. Penn saw the game out from there, holding the majority of possession and limiting the Blackbirds’ chances.