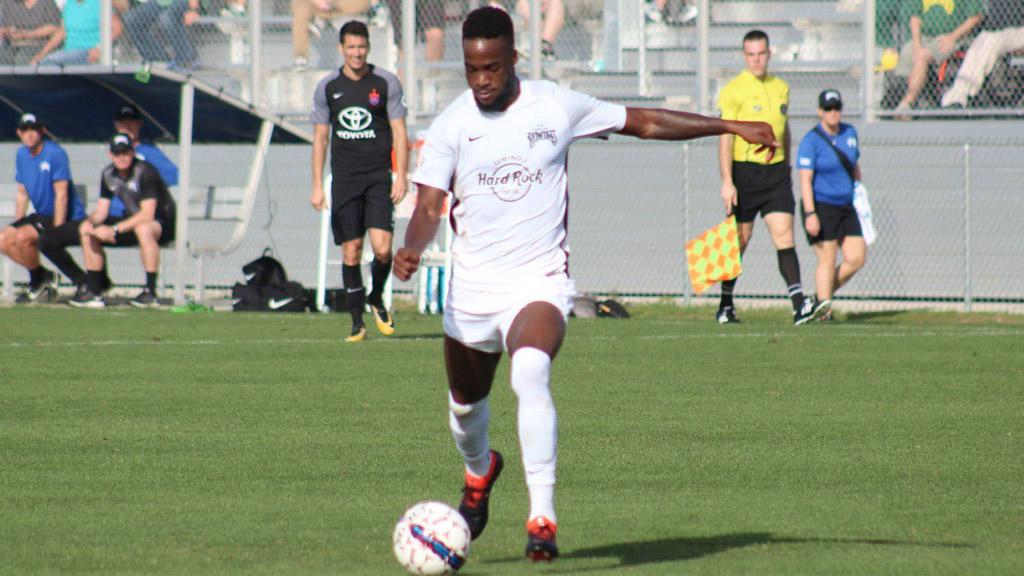 ST. PETERSBURG, Fla. – The Tampa Bay Rowdies knew the talent that Jamaican winger Junior Flemmings brought to the table when they brought the former New York Red Bulls II standout on board this offseason.

What they hadn’t reckoned for was the heightened level of strength the Jamaican brought with him to training camp when it began two weeks ago.

“That was one of the first comments I said to him,” said Rowdies Head Coach Stuart Campbell after last Saturday’s preseason outing against FC Cincinnati. “I [asked him] if he’d been hitting the weights in the offseason in the gym, and he said no, nothing unusual, but he definitely has filled out without losing that explosive speed. He showed that on numerous occasions today, and it’s good because we can transition from defense to attack very quickly.”

Flemmings had a standout year for New York, playing a role in the Rowdies’ demise in the USL Cup Playoffs last fall as the Red Bulls II defended their 2016 championship admirably before falling in a penalty shootout to Louisville City FC in the Eastern Conference Final. After scoring 17 goals and eight assists in just over 50 games for the club, his keen eye for goal was again in evidence in the Rowdies’ preseason opener, which saw him combining well with some of the club’s other offseason additions.

That’s been helped by a level of comfort in the locker room, which Flemmings said has quickly built chemistry off the field as well as on. While the side fell 1-0 to FCC, there was plenty to be pleased about for a first outing of the preseason.

“We’re not even two weeks in and the group looked pretty well,” said Flemmings. “We weren’t expecting any less with the quality, [but] we came out there with half of the guys having not played together. We came here, played 45 minutes and coach was really impressed. We’ll just get better from here.”

Tampa Bay’s next test arrives on Saturday as it squares off with Major League Soccer’s Montreal Impact as part of the 2018 Suncoast Invitational at Al Lang Stadium. While the side is still working to gain match fitness, Campbell believes games against top-level opposition can help sharpen a side in ways that can’t be replicated in training sessions.

“It’s great for the players to go out and play against MLS opposition,” said Campbell. “We’ll have another tough week coming up, we’re not going to take our foot off the gas, we’ll be working really hard, and their reward is to go out on Saturday night in front of our wonderful fans on a lovely big pitch and pit your wits against some of the best players in U.S. soccer.

“It’ll be a really good test for us, and not only that, from a tactical standpoint it’ll really work the guys. They’ll get fitness in that game that you can’t implement in training.”

For Flemmings, putting on a show for his new fans against strong opposition for the next two weeks is an enticing prospect.

“Going up against MLS teams is always going to be really exciting,” said Flemmings. “We’re really going to want to show what the Rowdies are about. I think we’re going in the right direction and we’re doing very well so far, so we’ll see what happens when it comes.”