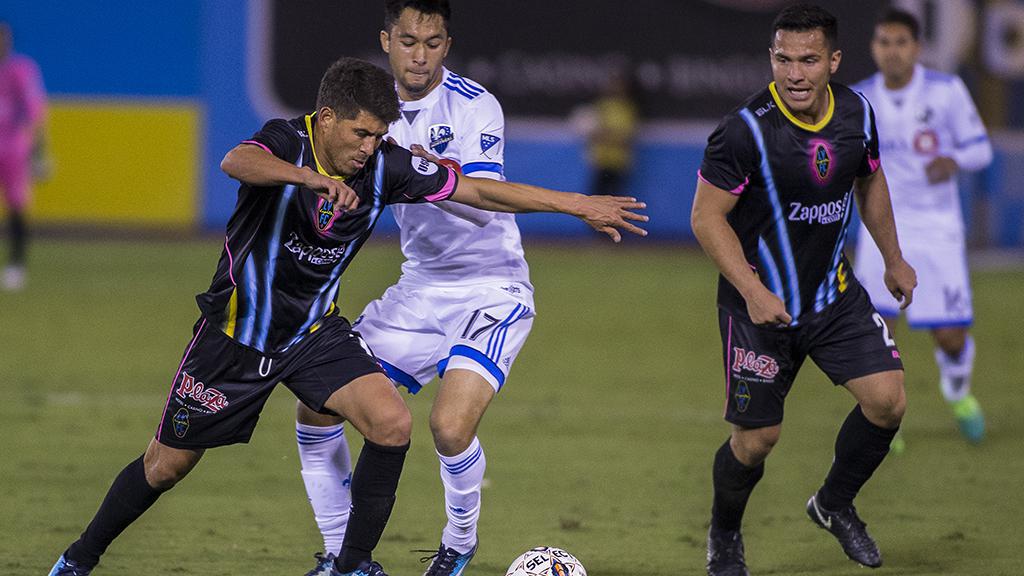 LAS VEGAS – Despite falling in its first preseason outing, Las Vegas Lights FC is looking to carry forward the momentum behind the club both on and off the field. From the very beginning the club has talked about being uniquely Las Vegas, Head Coach El Chelis spoke about finding players who “smell like Vegas” and that responsibility has now come on to the pitch.

“During the little pregame talk before the Starting 11, we looked and said ‘look at this environment we are in.’ It was really motivating. This is what I was expecting. The Vegas community has wanted pro soccer for a long time,” said midfielder, and UNLV graduate, Julian Portugal. “I knew it would be a packed house. I had a lot of friends and family in the stands. I couldn’t even see them. Packed house, it was exciting.”

That excitement is something that Chelis wants to reflect on the field. Vegas is an exciting town, with all the lights, and entertainment and the Head Coach believes his mission is to create a team that matches that excitement. In building the squad, creating a distinct style of play has been key in Chelis’ mind.

“Our team has this big personality and wants to face anything, any opponent. We will work, it’s my responsibility to show it,” said Chelis. “They have the desire, they have the energy. We have to give a spectacle with our play, but with a serious, responsible way of play.”

A sellout crowd of 10,387 at Cashman Field certainly responded with noise from the stands all match, and an entertaining atmosphere providing a strong start for the club. That has motivated the players, pushing them to work and prepare hard for the club's inaugural regular season, which is now four weeks away as they work to implement a more possession-based style than the group produces against the Montreal Impact.

With the club's second preseason contest arriving on Saturday against another Major League Soccer club, Vancouver Whitecaps FC, settling the game down has been a focus for the group.

“We wanted to possess the ball and play on the floor, on the ground. In the end, it was long balls,” said defender Marcelo Alatorre after the meeting with Montreal. “We were fighting for every ball, trying to win the ball and find those spaces. We had several opportunities, I’m surprised the final result was what it was. We can still improve, and there’s time to make adjustments before the season begins in March.”

VETERAN KOREAN ADDS TO INDEPENDENCE BACK LINE: Korean legend Lee Jung-soo has competed in a FIFA World Cup and a FIFA Club World Cup, and will likely enter the regular season the only USL player to have played in both as he officially joined the Charlotte Independence on Thursday.

Between 2008 and 2013, Lee appeared in 54 international games for the Korea Republic National Team including four starts in the South Africa 2010 FIFA World Cup where Lee scored against both Nigeria and Greece to help South Korea advance to the knockout stage. During his domestic career with Qatar's Al-Sadd, Lee also helped the club claim the 2011 AFC Champions League in a penalty shootout against South Korea’s Jeonbuk Hyundai Motors. Al-Sadd then competed in the 2011 FIFA Club World Cup, where they fell in the semifinals to FC Barcelona.

That level of experience will add to a strong defensive core already brought on board this offseason by Independence Head Coach Mike Jeffries. Lee joins new signings in center back Kevan George and goalkeeper Brandon Miller along with returning captain Bilal Duckett. That gives Jeffries plenty to work with ahead of the 2018 season.

“Just in the few days he's been here, you can see the class and ideas he has in terms of his ability to see plays,” said Jeffries. “At his age, getting fit and adjusting to the physicality is going to take a little bit of time, but the soccer part is fantastic.”

The Gimhae, South Korea native speaks little English at this point, but is relishing the opportunity to learn about American culture and the Charlotte community.

“He's excited about the challenge,” said Jeffries. “It's a new experience for us because we've not had a South Korean player in before, so the language barrier is a little bit of a tricky one. He's a very sharp guy, so I think he'll adapt very quickly, but soccer is soccer.” 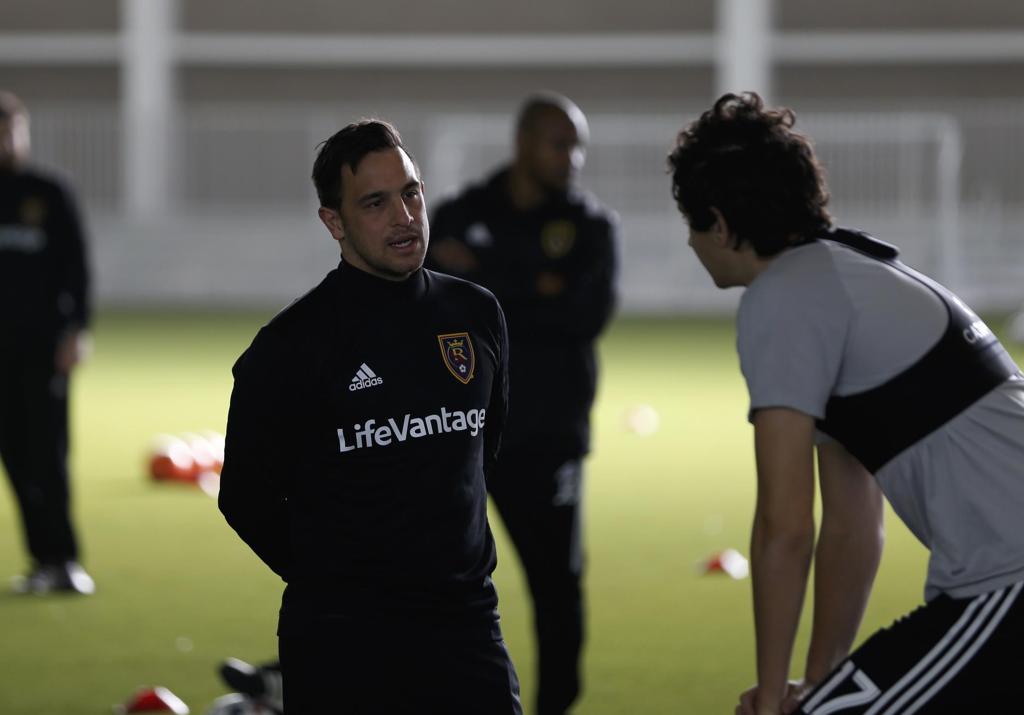 CRUZ READY FOR NEW ROLE: Through an almost 10-year professional career Danny Cruz was known as a hard worker, and that hard work has seen the former Philadelphia Union and Real Monarchs SLC player now join Head Coach Mark Briggs' coaching staff at the club he finished his on-field career with.

“With anything there is a learning curve but I’m up for this new challenge,” Cruz told the club website. “To be honest I’m honored to be joining such a great staff. I have great support all around me and I couldn’t be any luckier.”

This will not be Cruz’s first journey into coaching, having coached high school soccer while playing for Minnesota United FC two years ago. It was that role which had Cruz looking at coaching as a way to continue his involvement in the soccer world. A competitive man, Cruz wanted to keep that passion alive, and taking a coaching role at the defending USL Regular Season champions gives that side of his nature an outlet.

Cruz was determined to learn ahead of taking the job and has taken in training with Real Salt Lake's academy staff to see how that can translate into game scenarios. That encouraged Cruz to become a teacher of the game – the 28-year-old is currently working toward earning his USSF ‘B’ license – and that is something he sees as a vital part of this role, acting a resource for younger players to learn from.

“I try to be around and be the guy that says the right things, does the right things for the younger guys on the team,” said Cruz. “Young guys are looking for guidance and for the most part it is about growing the people around you and can you help grow the players around you? In turn that helps me grow as a player and as person.”

“Danny’s decision to move in a coaching role at this point in his career is something to applaud,” said Briggs. “The enthusiasm and work ethic he possesses is something that I am proud to have on my staff and I think he will add to our staff immensely.”

RING BRINGS STABILITY TO INDY: Change has been the key word for Indy Eleven this offseason, with the club's arrival in the USL being added to by new Head Coach in Martin Rennie, a new home venue at Lucas Oil Stadium, and plenty of new players in training camp. With that in mind having a stable core is vital, for Indy Eleven it doesn’t get more stable than now five-year Eleven veteran Brad Ring.

Ring has been a vital part of the Eleven for the past four seasons and now coming into a vital year where he's expected to play a big role as the club undergoes big changes. With everything that's happened since he last stepped on the field, the 30-year-old is pleased to still be at the club.

“It’s rare to be anywhere for five years, in any sport, just look at any roster there’s rarely many guys that are still there,” said Ring on the Soccer Saturday show. “That’s how it is, but I’m glad I’ve stuck around. Maybe it’s because no-one else wants me but I’m glad to be here.”

With a new coach, that often means changes for key players such as Ring, who has logged more than 100 appearances for the club, but the midfielder isn't concerned as he gets to know his new teammates and works to impress Rennie. With the no-nonsense approach that has made him a favorite of the club's supporters group the Brickyard Battalion and Slaughterhouse 19, Ring is focused on continuing to play the same game that made him a leader in Indy's squad.

“I’m not sure, we haven’t got started yet with the ball so it’s hard to tell what the coach thinks my role will be,” said Ring. “Some of that stuff plays out over the first couple of weeks or months, sometimes there’s vocal leaders who step up, other times it takes some guys a bit longer before they implement their leadership style. Regardless of where I stack up, I’m going to play the way I’ve played and lead the way I’ve led over the last couple of years. I’m not sure how I’ll stack up in the team but I know how I’ll play.”

Rennie was pleased with Ring and his leadership, giving some hints of where the new Head Coach sees the midfielder's role, clearly utilizing him as a leader and continuing the role he has played during recent seasons at the club.

“He’s an excellent professional who will really consistently do his job really well,” Rennie told the show.

Going through change is difficult for everyone, including the fans, but Ring – who has had plenty of support from the fans in Indy this offseason – had encouraging words for everyone.

“It’s always difficult for fans, not seeing as many familiar faces around, but new people will emerge, new stars emerge and new fan-favorites emerge and we’ll have that this year,” said Ring. “Coach Rennie has come in and you can tell the roster he’s put together has several quality players and I don’t think we’ll lack competition at all. It’s on us players now to put in the work and hit the ground running.”